It’s strange to think that a small piece of technology that provides no physical resistance could have a positive influence on one’s health, but in my case that’s more or less what happened. Earlier this year I reviewed the Polar A300, an activity tracking watch, and Polar’s H7 Bluetooth Heartrate monitor, using them as tools to help me create a mild fitness regimen. It not only helped give me an insightful evaluation of the technology, but it also started me on the road to getting back into shape.

But as time went on I discovered that as effective as the watch was, it had some limitations. Polar’s PolarFlow web portal, which stores information collected from the watch and provides insight into the user’s workouts, was limited by the data that was available from the A300. Factors like heart rate and duration were handy, but adding other information like location and altitude would help to tailor a better workout program. Polar was nice enough to send along the M400, their GPS running watch, for me to review, and the whole process got me thinking about how the technology can be used to help the easily discouraged in their quest to lead a healthier life. (If just want to know about the M400 features, we’ll have that posted soon.) 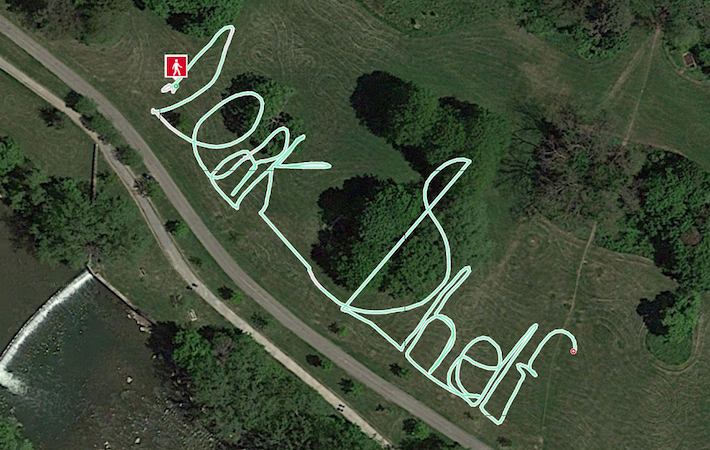 Years ago, I was in better shape. I used to study Karate at a local dojo and would attend class a few times a week (as a student, as an assistant, and sometimes as a teacher). The activity kept me in relatively good shape, but I still struggled with cardio (beyond the confines of class, anyway). I kept up with strength-building and martial arts training exercises after I left the dojo, but my cardio was still the pits. I figured that given my schedule and responsibilities, running would be an effective way to compensate for that problem, but I’ve always been horrible at it, a fact that is further exacerbated by my own ridiculous standards. Miniscule improvements are hard to see when there is no real method to track them accurately.

That’s where technology comes in. Sure, you can probably use a stopwatch and a map to track your progress against a known distance, but being able to automatically keep track of more information makes development that much easier and more satisfying.

Or at least, that was my thinking when I had the opportunity to review the Polar A300 and the Polar H7 heart monitor. I’d be able to keep track of time and my heart rate to see exactly how well I was doing. When I first started running with the technology, I adhered to the time-based running/walking method. I would run for a certain amount of time and then walk for a smaller amount of time, with the goal being that I’d be able to walk less and run more during subsequent sessions. Using PolarFlow, I could see what my maximum heart rate was during the run and see how long it took my ticker to recover. Using Google Earth, I’d try to tie my results to geography to attain some sense of satisfaction and to plan new routes to push myself. The technique worked well for a while, but if I changed my route just a little bit it wouldn’t go well and I couldn’t figure out why.

And so I started using the M400, which tracked position via satellite, as well as everything else that the A300 would track. Eventually, after using the M400 for a few sessions, I checked the GPS tracking on PolarFlow and discovered that some of those alternate routes actually had a subtle increase in altitude, which would result in me getting more tired than I thought I should have been (the grade was subtle and difficult to detect while I was running). Of course, not knowing that the elevation change was happening caused me to blame my own lack of ability, which was partially accurate, but not for the reasons I had thought.

Eventually, after examining my running results, I changed tactics, and started using my heart rate instead of time as the main assessment for my running. Now, I run for as long as I am physically able, staying close to my maximum heart rate for as long as possible (until I need to slow down). Once I start walking, I monitor my heart rate, engaging in a fast pace again once it hits 140 beats per minute. With this more personal approach, I now train more effectively and can run for a longer duration (thanks to increased endurance) and don’t need to stop for as long (thanks to faster heart rate recovery). In the past, before these more intelligent fitness watches, I wasn’t sure as to how to analyze my exercise sessions. Polar makes it very easy to do so, and aside from the raw numbers and graphs, offers suggestions as to what has been gained in each session.

If you’re stuck in a rut with your workouts, then there might be a solution with technology. In the past, I considered wearable fitness-related tech somewhat kitsch – a mere phase that would die off at different rates for each person. However, I have changed my mind: if used properly (and with a proper diet), these tools can be a very effective way to help you get into shape (or manage your fitness if you are already on the road to better health). With this technology under your belt (or around your wrist), and the beneficial feedback that it brings (some of the web portals are pretty slick), you can enjoy a better quality of life and have fun in the process.