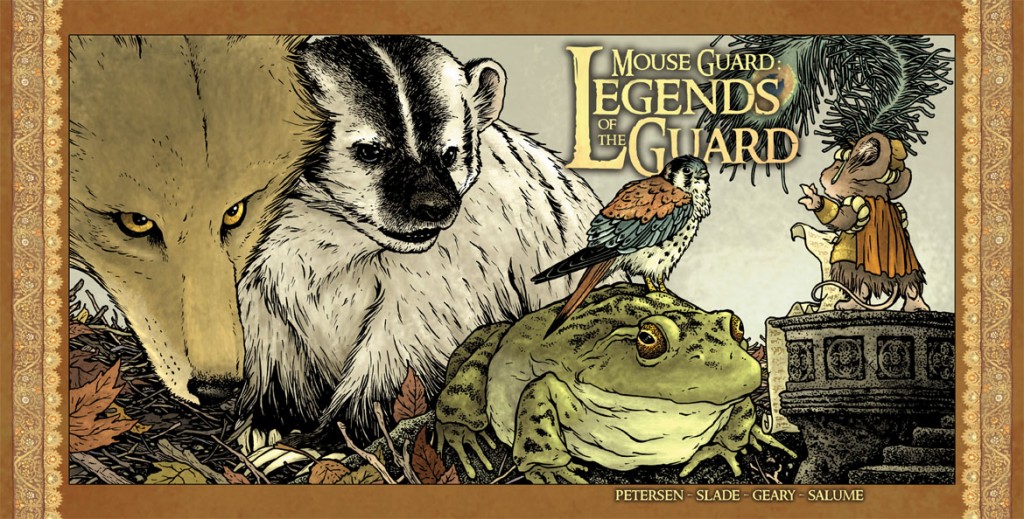 Such is the motto of the Mouse Guard, and underlying theme of the Eisner-winning spin-off Mouse Guard: Legends of the Guard. LotG is an anthology of tall tales told by mouse patrons of the June Alley Inn about the fabled Guard, with each story attempting to outdo the last while meeting three criteria: each story must hold one truth, one lie, and be previously untold in a tavern. David Petersen, writer and artist of the Mouse Guard series, brought together an amazing selection of writers and artists for the first volume of LotG and has done so again for the highly anticipated second volume debuting this month. Featuring contributions from industry legends like Stan Sakai (Usagi Yojimbo), Bill Willingham (Fables), and Rick Geary (The Adventures of Blanche), to up-and-comers like Cory Godbey (Jim Henson’s Labyrinth), Legends of the Guard Volume Two is shaping up to be another amazing chapter in the Guards’ history. We sat down with Petersen at C2E2 to chat more about Legends of the Guard and find out what it’s like to have other creators play in your sandbox.

Lack of interest was never an issue for the series, so putting out a second volume was a no-brainer for Petersen. “It’s been great, a lot of people are excited about it!” He started enthusiastically. “When the first one came out, I had a surplus of people who wanted to do the series. I figured as long as I have people [I like] who want to do it, and the book is being so well received, we could do this again.”

With Volume One featuring talented creators like Gene Ha, Guy Davis, and Craig Rousseau, Petersen was no stranger to working with other creators, but Volume Two did hold some surprises. “With the first group, everybody came to the table with something they wanted to do and met with my approval very quickly,” he explained. “They mentioned what they wanted to do, and it sounded perfect so I just went ‘Yeah!’ There were a couple of people who said ‘I want to give you stuff along the way: look at my story, look at my roughs, look at my pencils, look at my inks!’ I was just like ‘I trust you, I like what you’re doing, just go do your thing!’ This time around there were people who were doing that but also saying ‘Can you help me with the story? Can you help me figure out some of the pacing? Can you help me with this part?’ So I’ve been more hands-on in that sense, which is really interesting because I’m so used to working alone. I still think that they’re those people’s stories; I haven’t muddied the waters too much but it’s a different experience to be working on a project where I’m helping other people.”

One thing is obvious: Petersen’s excitement about collaborating with creators he’s genuinely a huge fan of. Just don’t ask him to pick favourites. “That’s like telling a parent to pick their favourite child!” He exclaimed with a laugh. “I can’t play favourites, I’m excited for lots of people for different reasons.” He does start off with four time Eisner-winner and creator of Usagi Yojimbo, Stan Sakai, although it’s not Sakai’s credentials that brought him to mind first. “Stan’s always been wonderfully supportive and just the nicest, sweetest guy ever. Right out of the gate, when Mouse Guard came out, Stan was there supporting and being so kind. So to have his support now in story form is great. And he did it differently than he did his Usagi pages— they’re all watercolours. So I got a Stan Sakai story but it’s also totally different: you’re not going to see this thing anywhere else from Stan.” An impressive claim, considering Sakai’s thirty or so years in comics.

Petersen continues with another personal favourite he’s excited to be working with. “Rick Geary is a hero of mine. Seeing some of his inking work is what made me believe I could do comics. Because my inking work doesn’t look like traditional comics, I thought of it as more children’s book illustration style work. When I saw Rick Geary’s ink work, I went ‘I do that kind of stuff in comics… you mean that’s ok? You can do that?’” He chuckled at the memory. “Without even knowing it, seeing his work gave me a whole lot of self-confidence to do my book.” Geary will contribute a story in issue #2, along with Christian Slade and Jemma Salume.

Bill Willingham is another contributor to the series, although not exactly the way newer fans of his work might expect. “[Bill] said ‘I’d love to write a story for Legend.’ He used to draw too.” Petersen began, which is where his devious side came out, as he recalled an ultimatum he gave to Willingham. “You don’t get in unless you draw a story. He just said ‘No, that would take too long, I don’t draw all that well anymore…’ He starts being really self-deprecating and I said, ‘No way.’ If he really insisted, I would have partnered him up with someone [but] I just loved the idea of blackmailing him into allowing Mouse Guard to be his return to drawing comics. Which it is. He drew a five page story and it’s fun.” Petersen may be devious, but seeing Willingham’s art in print again is a triumph worth a little underhanded behaviour.

“At the end of the first book, as all the patrons of the tavern are leaving, June (the proprietor of the June Alley Inn) says, ‘I think we might be able to make this a regular occurrence!’” Petersen said. “That was supposed to be a hint of me telling the fans ‘Yeah, we’ll probably do this again soon.’” With any luck for Mouse Guard fans, June will make it a yearly event, and a line-up of new creators is already pitching stories for Volume Three.

Mouse Guard: Legends of the Guard Volume Two is out this May. Check with your local comic book store for availability.