Despite having over 100 big and small screen credits to her name, veteran Toronto born actress Kate Trotter still sees the stage as her one true home.

“I always say that I’m a classical stage actress first and foremost to this day.” She said during our phone conversation last week to promote her latest film, the May-December lesbian romance Tru Love (opening in Toronto this Friday). “I just say that I do some film and television from time to time. I think this movie here does what most great stage work can do, which is when you see people watching something in a theatre, you see them holding up a mirror to their own lives. That kind of reaction was really the most substantial reason why I became an actress in the first place.”

“When I first came out of the National Theatre School in Montreal, it was a great time to be an actress because there was so much American stuff that was filming in Canada. So much that it was at a point I never felt the need to go anywhere. I remember back in the 70s, I was offered the job of replacing Robert Lansing on the TV show Kung-Fu: The Legend Continues with David Caradine. Robert Lansing had gotten sick, and I had been on the show before, but for that fourth season they were going to take a chance on my character and have that be the one that replaced Lansing on the show. And I love theatre and working in Canada so much that I think that was the first time I actually said to my agent with a pause, ‘So how much time do I have to think about this.’ And for a few moments he went silent and said ‘Are you kidding me? Warner Brothers doesn’t just offer opportunities like this to actresses in their 30s. What is there to think about?’ I still laugh about that exchange and I ended up doing it, but I think that best illustrates how I still feel that pull of the stage.”

The role she has been given in the co-directorial effort by Kate Johnston and Shauna MacDonald (the latter of whom play’s the film’s title character) is couldn’t be offered to just any actor, and it’s even rarer that it would be written for someone of Trotter’s age. It was accepted without nearly as much hesitation. The 60 year old Trotter gets to play her age as Alice, a recently widowed woman who comes to spend time with her estranged, workaholic daughter Suzanne (Christine Horne). With her aloof and cold daughter taking after her father’s self-destructive and inattentive tendencies, Alice finds herself spending a lot of time with Tru, a serial “love ‘em and leave ‘em” type who awakens feelings of friendship and puppy love that Alice didn’t even feel when she was married.

“It’s rare to get a part like this, especially one written for women who have reached, as they say, ‘of a certain age,’ and everything was so right about the part and how it was written and presented to me that it was clear there was a lot of room to explore this character and what makes her who she is. There’s a very rich history to Alice – and also to her daughter and to Tru – so it almost seems like this might be the first time this person has ever experienced not only friendship, but love, and that’s even though she was married. It’s something that I think is more common than people think among people my age. Some people I know got married really young and during a time when regardless of who you love, it was never really okay to express how you truly felt about things. There’s this real sense that Alice put a lot into her relationship with her husband and daughter, but now with one only visiting her as a ghost or a vision and the other drifting further and further apart, she’s in this space where she’s finally been given enough space to question if things could be better.” 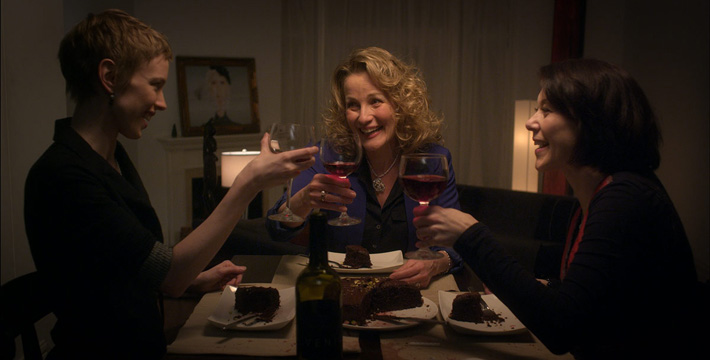 Johnston and MacDonald’s film is a bit of an actor’s dream on the page: well rounded female characters that take the lead in their own elaborate familial history. But working on the constraints of a miniscule independent Canadian film budget didn’t allow for much time to rehearse and foster a comprehensive sit down meeting to talk about the dynamics of Alice’s relationships. She has nothing but wonderful words to say about her collaborators (especially Horne, who she describes as “an incredible force” at great length), and that she quite likes the challenges of making smaller films and productions in the digital age.

“We had only about 14 days to shoot, so there would be some time when we all had to look at each other and say ‘We only have precisely one take to do this in, so let’s hope we get it or it might not make it back in the movie.’ And that’s both terrifying and strangely liberating at the same time. As an actor, you’re always told to let your gut take you where a scene or a character needs to be, and these are the times when you really have to listen to and feel that in your gut. There wasn’t much time to rehearse, and I liked that. It was actually a blessing because you aren’t over thinking it and forced into a mindset where if you think something’s wrong that you can fix it or talk it out later. It requires you to do your homework and to listen and be available to everyone. That’s definitely not the worst thing to work with.”

This begins a conversation about how the film’s characters are also reflections on how patient people get with age. Suzanne has not patience and is driven by a need to succeed as fast as possible, Tru has begun to lose patience with herself and others, and Alice has learned to give people the time and space that they need to come to their own conclusions and decisions.

“That’s a really astute observation, and one that I hadn’t thought of until just now, but there’s a great amount of truth to that, and I think if you see that in the film it certainly informs how you view the relationships between these characters. I think patience is something that you learn, for sure. When you’re in your twenties and thirties, you have no concept of how life moves and you think it’s going to be over so fast that you need to go out and accomplish everything before you think it’s too late. We push people into thinking this way, and I think only when you start to hit your forties does that start to dissipate. In your forties, I think that’s still there, but you start to realize that life might be going on longer than you think if you’ve been lucky enough to make it that far. Then when you get to be my age and you pass sixty, you have friends that are ill; friends that are dying, and those friends are your age. Then you start to find your true happiness, and it could be as simple as sitting on a deck chair on the beach and just staring out at the water at nothing in particular. Life is short, but not as short as you think, and the things that you should be fighting for are often the things we tend to ignore until we get older.”

That search for happiness and truth in her work also extends to her feelings about how people should conduct themselves when they get older and not try to act younger than they are, even for actors who aren’t going to be offered as much as they go on in life.

“If you’re seventy, be seventy. Be thrilled that you’re seventy. You MADE IT to seventy, and that in and of itself is an accomplishment. Don’t be thirty again. Be seventy. You’ll be less miserable than when you were thirty because you can be yourself. You can be present. My favourite scene in the film is a moment when Alice is trying to talk to her daughter. She’s just working away stressed out on her computer and not really listening, and Alice is just relaxed and content on a chair behind her sipping on a glass of wine dressed in a housecoat.  You compare those moments and there really is no comparison. I mean, which would you rather be doing right now? I think we both know the answer to that.”