Into The Badlands: 6 Truths That Will Make You Love Aramis Knight - That Shelf Skip to main content

“M.K. is one of those roles I’ve never really had before,” Aramis Knight tells Dork Shelf. “It just feels natural. We have a lot in common.”

I was interviewing him after last week’s episode of Into The Badlands, which placed his character — a mysterious and prideful teenage nomad with dark mystic martial arts powers — into a great deal of peril. He told me that he identifies with M.K.’s outspokenness, which sometimes gets the character into trouble.

“You get in trouble sometimes for being outspoken?,” I ask.

As accurate as that might feel, and as outspoken as Knight is, I found that it at least didn’t apply to our conversation. Here are six truths Aramis Knight told us that won’t get him in any trouble that we found to be pretty admirable.

1. He and Daniel Wu have a real life father-son relationship

After M.K. saves Sunny’s life, the most dangerous man in the Badlands takes the boy under his wing. The archetypal master-student relationship between Sunny and M.K. is one of the more compelling aspects of the show.

“Me and Daniel, through training, not only was he trying to help me get better at martial arts, but we were also trying to develop sort of a father-son, Mr. Miyagi-Karate Kid  type of relationship,” says Knight. “That’s really what we were going for and I think we achieved that. You can definitely see right through fake chemistry, so we wanted to make it very real. And me and Daniel developed a very special relationship. Very father-son like, actually.”

2. He does his own stunts

“I do pretty much all of my own stunts,” he says. “I’m really excited for next episode because there’s a certain fight on top of the fort with me and Sunny, and it’s one of the longer fights that I’m in in the series. The combinations are really, really cool, and I felt very confident about it, so I’m excited to see how it looks.”

As I learned from interviewing Emily Beecham, who plays The Widow—the show’s badass baroness—the cast did an intensive boot camp in order to prepare for the intense filming. Master Dee Dee and fight director Stephen Fung worked with the actors in developing their fighting styles based on their strengths and weaknesses. “It was extremely, extremely helpful. I didn’t even realize, actually, how much the training helped until we began filming.”

Knight says that there isn’t a ton of preparation before he goes into filming his fight scenes, because the creative team wants to keep things looking raw and natural.

“You’ll notice [in episode five] that even though we’re right on point, you can tell that we haven’t done it a lot of times and it still looks very natural and very real. And that’s something I really like about it because you know, because all the fighting is so spectacular and it is so—you know, it sort of puts you in awe—it very much is real in a lot of ways.”

“I have no martial arts background,” says Knight, explaining that his life long love of basketball was what provided the biggest help during the training period. “But I realized quickly that it’s much more of a dance than it is a fight. And you know, it requires a lot of technique and a lot of grace, and a lot of flexibility, which is something I didn’t really have going into the training. And I definitely have coming out.”

I ask if he can see himself keeping up his martial arts practice after Into the Badlands is finished. He says he’s already continued training in Los Angeles.

M.K. is one of the few teenage main characters on Into The Badlands. Sure, he’s surrounded by other young men training to be post-apocalyptic assassins, but the only person his age of consequence to the plot  is Tilde: the throwing star wielding young woman who works for The Widow. In the show, Tilde and M.K share a violent on-again-off-again romance, but in real life their actors get along quite well. Knight tells me that it’s rare for him to have other people on set his age, so he has become close with Ally Ioannides, who plays Tilde.

“Me and Ally became best friends,” says Knight. “I mean, we hang out all the time. She’s at my house pretty much every other day. And it was very much that way in New Orleans too, it’s nice to have someone my age sort of appear around me. I’d never really felt that before with anything other than Ender’s Game. Ender’s Game was the only other project where I really had other kids around me.”

5. He’s the perfect age for building a fandom

Even though it’s only four episodes into a six hour first season, Into The Badlands has already built up a huge and enthusiastic fanbase, unlike anything Knight has experienced until now. It’s not unlike his character in the show. M.K. is the badlands’ most wanted, having become infamous for his powers and a great number of dead bodies left in his wake.

I ask Knight about how this fandom differs from the Ender’s Game enthusiasts he’s encountered.

“Ender’s Game did have a lot of fans, but the difference between Ender’s Game and Badlands is, one: I’m a lot older so people are going to cling to me a lot more. They don’t really cling to a 12 year old, they want to to cling to the 16 year old who’s kind of a man but kind of a boy at the same time. Like, it’s a very trendy age for me right now.”

“And also, you know, there was a lot more asked of me in this series. With Ender’s Game I was a supporting character, but in this I’m very much the lead a lot of times. So I was able to take control of my performance and I had a lot of room to be able to develop my character. Really, there was a lot of pressure on me while filming and I was sort of forced to deliver. So I definitely think that the fans I’m gaining from this are unlike any that I’ve gained before.”

6. He is a walking, talking dork shelf of basketball trivia 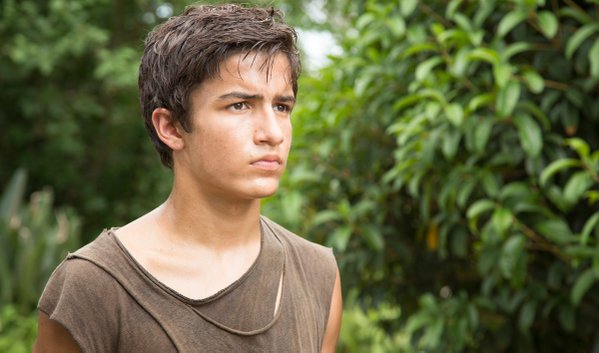 “I’m trying to think of something good.”

When I ask Knight what’s on his dork shelf, he has to think about it. Earlier in our conversation I spoke to him about anime, which he agrees must have been at least some inspiration for the show. He told me that when he was younger he was a massive Teen Titans fan, so I’m expecting some kind of DC Universe collectibles to adorn his shelf, but instead he picks sports. Knight is a walking talking dork shelf when it comes to his favourite activity.

“This is pretty dorky actually,” he says. “I’m pretty obsessed when it comes to basketball and basketball stats. I know too many stats about basketball and it becomes a bit dorky when you actually talk to me about it. I can pretty much tell you the number of points Lebron James scored five years ago.”