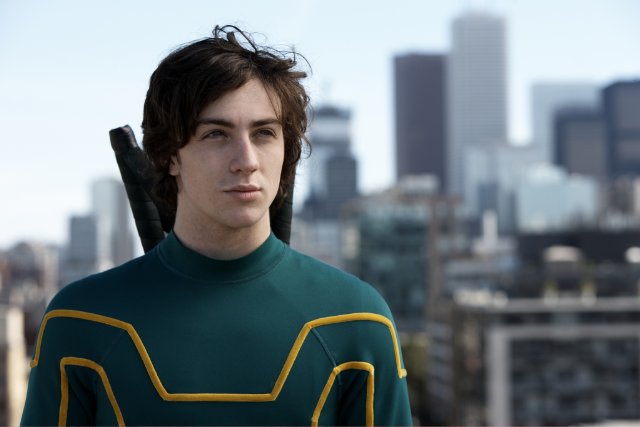 No pressure with that title. I mean, yes I think this is a pretty good review, but the bar is set pretty high…

Kick-Ass is director Matthew Vaughn’s film adaptation of the Mark Millar penned comic book of the same name. Set in New York, the story takes place in a world much like ours, where superheroes are relegated to comic books and movies. That is until some good samaritans, fed up with organized crime in their city, decide to take the law into their own hands and become costumed vigilantes. It’s a good premise, but not one that hasn’t been done before. It’s what Kick-Ass does differently and unexpectedly that sets the film apart.

High school student Dave Lizewski (Aaron Johnson) is a big comic book fan. Like many of us, Dave wonders why no one has ever tried to be a superhero before, and decides to give it a shot. Unfortunately for Dave, being a masked crime fighter goes about as well as you would expect it to. His first encounter with several thugs leaves him beaten, stabbed and hit by a car. The near death experience only strengthens Dave’s resolve to fight crime. Ironically, his injuries and subsequent surgeries leave Dave full of metal plates and a newfound tolerance for pain. He becomes an overnight YouTube sensation when his next encounter with local thugs is caught on video. Unfortunately, the exposure gets Dave more than he bargained for when the local mob decides to blame him for the actions of other costumed vigilantes, namely Big Daddy and Hit-Girl.

Contrary to the advertising campaigns for the film, Kick-Ass is not about the pint sized wrecking ball that is Hit-Girl. She’s great, but it’s purely marketing. Everyone else in the film is equally great. Aaron Johnson, fresh off his turn as teenage John Lennon in Nowhere Boy, plays Dave, also known as Kick-Ass. He plays the role with just enough goofy naivete to be convincing as someone crazy enough to try being costumed hero. Nicholas Cage plays Damon Macready, a comic book collector who has taken his passion a little too far. His costumed alter-ego Big Daddy is like Batman, but with a shotgun. It’s appropriate then that Cage plays his character like some sort of insane version of Adam West. I know Cage is hit or miss for many people, but he’s really on in Kick-Ass, and in a good way. Mark Strong, soon to be seen as the villain/mentor in Green Lantern, turns in a solid performance as the menacing mob kingpin Frank D’Amico. If you weren’t convinced he’d make a great Sinestro before, you’ll certainly be convinced after seeing Kick-Ass.

The only let down for me was Christopher Mintz-Plasse. As the son of Frank D’Amico and as his costumed alter-ego Red Mist he’s important to the story, but he just feels under utilized. Mintz-Plasse is a funny guy, but it seemed as though they were just going for cheap laughs at his expense, since everyone knows him as McLovin from Superbad. Hopefully, we’ll see more from him in the inevitable sequel.

Many have asked if it’s appropriate for 11 year old Chloe Moretz, who plays Hit-Girl, to be using the kind of language and engaging in the bloody mayhem that her role requires. Yes, it’s totally offensive. She is a young child with a mouth like a sailor and a penchant for eviscerating baddies, but give the young actress some credit. While the character in the film may be exploited by her father, I didn’t get the impression that Moretz was exploited by this role at all. She’s clearly a very bright young woman, and would have to be in order to play Hit-Girl so convincingly.

The film stays fairly faithful to Millar’s source material; a few character names are changed and the ending of the film is a little more Hollywood than the comic. Thankfully, the ultra-violent, profanity laced tone that made the comic book so great remains intact. Director Matthew Vaughn worked closely with Millar on the film, and it shows. It’s not just the writing and the story though, the costumes and settings feel like fully realized versions of John Romita Jr.’s art. Full credit to Matthew Vaughn for hitting the nail on the head with his adapatation. If you enjoyed Kick-Ass the comic book, you will love Kick-Ass the movie.

The film, like the comic, toys with the conventions of superhero mythology. It explores the reasons why “real” people would want to become costumed vigilantes. Every character in the film has their own motivation: Kick-Ass does it because he’s tired of being a painfully average high school kid; Big Daddy does it because he’s obsessed with comic books; Hit-Girl and Red Mist do it because they just want to please their fathers. You very rarely see this kind of reasoning in the DC or Marvel universes. Superman does what he does because he’s a god; Batman does what he does because he’s a billionaire and he’s insane; Spider-Man does what he does because he had superpowers thrust upon him and feels responsible. The film begins with a costumed wannabe plummeting to his death, with Dave explaining that you’d have to be crazy to actively try to be a superhero. Even in the pulp fiction universe setup by the film, the only reason the characters are able to do what they do and survive is either through skill, firepower or sheer dumb luck. If there’s one thing Kick-Ass will probably convince of, it’s that trying to be a superhero is probably not a very good idea.

As the comic movie matures, we’ll probably be seeing more post-modern takes on the genre. Books like Kick-Ass and Watchmen explore the tropes of the superhero mythos, while at the same time blending, recognizing and playing up the history of the medium. The film adaptations of these books should ideally do the same. While it’s arguable if Watchmen succeeded in doing so, Kick-Ass definitely does succeed in this respect. If you’ve seen and enjoyed a superhero film in the past ten years, you’ll get Kick-Ass. If you love superhero stories, you’ll get Kick-Ass. It’s not for the faint of heart, and it’s not for everyone, but if you count yourself among the people I just mentioned then you really need to see this movie.