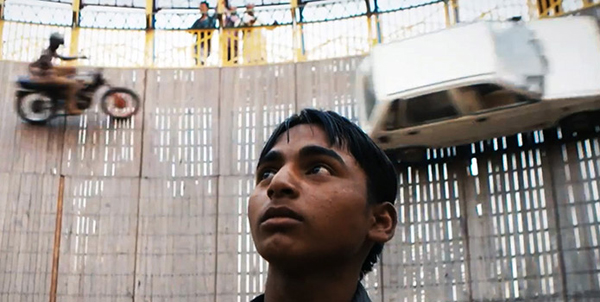 The TIFF Packaged Goods series once again returns to the Lightbox this Wednesday at 7:00pm for their annual year end round-up of the best in commercials and music videos, and this year’s final programme is definitely heavier on the latter than the former.

Commercials seem to be in fleeting supply this year, but the majority of those on display showcase predominantly great animated pieces. Oreo and Chipotle chip in gorgeous looking, music-aided pieces that are cute and bittersweet, respectfully. IBM contributes a simple looking, but impressive in scope frame-by-frame animation that was carried out at an atomic level. There’s also a neat, but brief bit of tissue paper origami, Jason Sudeikis as an American football coach tasked with working in the Premier League, and Jean Claude Van Damme’s already viral “epic splitz,” but that’s all that’s really noteworthy in terms of the advertising spots picked for this year’s showcase. A little more than three quarters of the show is made up of music videos.

Sudekis returns for the video for Mumford and Sons jangly “Hopeless Wanderer,” alongside Ed Helms, Jason Bateman, and Will Forte on one of the funniest examples of a band poking fun at themselves this year. Django Django’s video for “Wor” also doubles as a (literally) gripping documentary look at Indian stunt riders. British rapper Dizzee Rascal goes regal for almost no real reason except to make a video that looks like it was custom made to be cut into pre-constructed GIFs. Capital Cities’ ear worm “Safe and Sound” offers up a warm hearted and silly pop culture history lesson. The Yeah Yeah Yeahs offer a sexy Twin Peaks inspired mystery with their video for “Sacrilege.” And speaking of Twin Peaks, Ray Wise shows up in the Eric Warheim directed video of “Wishes” (from Beach House) as a man living out a fantasy of delivering a huge, bombastic speech on a football field to a crowd.

The music videos definitely take centre stage here, which is great for a theatre where such music can be enjoyed in the highest sound quality possible. It is kind of a bummer, though, that there weren’t many other memorable selections from the world of commercials to break up the tunes. The ones that did get selected are mostly great, but this one’s all about the music, man.