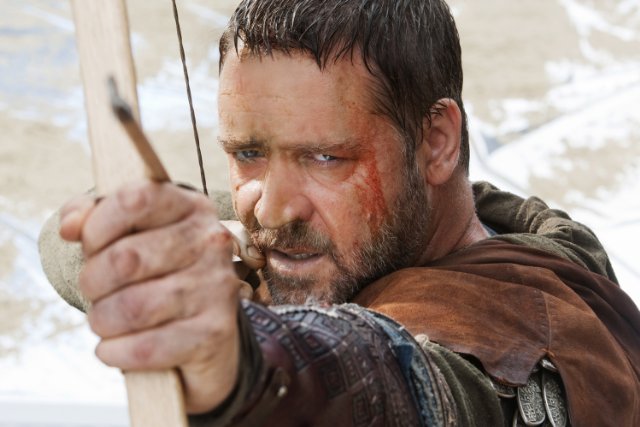 It seems that every twenty years or so, Hollywood decides it wants to take on the English folk hero Robin Hood. From the Douglas Fairbanks and Errol Flynn era, to the Connery/Hepburn duo of Robin and Marian and more recently the dubious-yet-classic Kevin Costner outing, Robin Hood is no stranger to the big screen. I’m going to make myself feel old right now and state that it has been nineteen years since Robin Hood: Prince of Thieves, and like it or not Hollywood has gone and made another Robin Hood film. This time out they decided to go with a great filmmaker—or rather someone who was a great filmmaker before 1991—Ridley Scott. Predictably, Scott’s Robin Hood is a gritty medieval tale, full of complex political intrigue, brutal battles and more characters than you can shake a sword at. What may come as a surprise to many, is the comedic tone that the film takes on at times. This shift in tone makes Robin Hood feel like two very different films; films that don’t work individually or together for that matter.

The film is a prequel of sorts, an origin story for Robin Hood. The film takes numerous liberties with history, which is par for the course for a Hollywood picture dealing with a legendary figure. While it is interesting how American screenwriter Brian Helgeland weaves various English legends and histories together for the story, you’d think that Scott, himself an Englishman, would want to get the facts straight. The average viewer probably won’t care, but last time I checked Robin Hood was not responsible for the Magna Carta. There are also some real issues with continuity and location, again not something that the average viewer will care about, but anyone familiar with English or French geography will know that you cannot travel back and forth from Nottingham to Dover in an hour by horseback—something many of the characters do more than once throughout the course of the film. Scott expects the viewer to suspend their disbelief, but in the case of Robin Hood this convention is far too convenient and relies on an ignorant audience to work.

The film doesn’t seem to be able to find its footing, it’s not quite sure what it wants to be. In one scene it’s a violent medieval nightmare complete with sieges, pillaging and the brutal murder of an elderly man; the next minute it turns into a comedy, featuring love games between Robin and Marian and the drunken, slapstick adventures of the Merry Men. There’s really no balance between these two extremes, and as a result the film feels wildly inconsistent.

There’s simply too much going on in Robin Hood and too many characters to keep track of. Every time you think you’ve met every character, the film throws a new one at you. When a film is still introducing characters in its last acts, there are sure to be issues. This is not to insult any of the actors though, there are some great performances, but they’re lost in a sea of bad accents and bit players. If Kevin Costner and Christian Slater have taught us anything, it’s that if you’re making a movie set in England, use English actors! Americans, Swedes, Canadians and Australians are not from the UK and you can tell. Russell Crowe’s performance is a Russell Crowe performance, he alternates from growling and mumbling to shouting and raging his way through the film. Cate Blanchett is always great, but really isn’t given much to do as Maid Marian. Max von Sydow is awesome; if he’s good enough for Ingmar Bergman he’s good enough for Ridley Scott. Inexplicably, two of the Merry Men are played by Canadians Kevin Durand (Keamy from Lost) and Alan Doyle (the lead singer from Newfoundland’s Great Big Sea… What?!), and are there primarily for what Canadians do best, comic relief. William Hurt and Mark Strong are really the only standout performances, though like everyone else they don’t get much screen time.

Robin Hood is a major disappointment; as a Ridley Scott film, it’s even more disappointing. From the technical side of things, Ridley Scott still has it: the film is beautifully shot and the production design, costumes, sets and props are all top notch. Robin Hood may convince you that Scott’s days of telling truly great stories are behind him, but you get the sense that maybe there is a director’s cut (similar to Scott’s Kingdom of Heaven) that is perhaps a better film. That said, the theatrical cut of Robin Hood simply isn’t very good, and that’s what you’re paying to see.