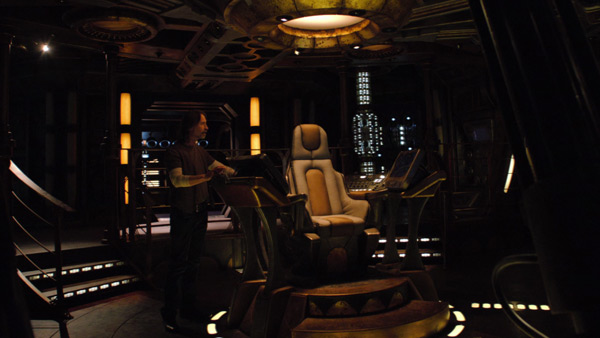 Last week’s episode Stargate Universe provided a nice conclusion to the cliffhanger ending of season one, but also left many issues unresolved. The ship is full of Lucian Alliance prisoners, and no one is quite sure to do with them. Telford, who was revealed to be a mole for the Lucians, did help save the Destiny crew, but he was also the one who endangered them all in the first place. We still don’t know what the Lucian Alliance wanted with the Destiny, it’s clear that Ginn and Simeon know more than they are letting on. T.J. is dealing with the aftermath of losing her unborn child and Chloe cannot explain her mysterious new healing ability. To top it all off, Colonel Young and Doctor Rush still don’t trust one another, and probably never will. But aside from all that, things are starting to get back to normal aboard the Destiny, or at least as close to normalcy as it can get on a ship lost on the other side of the universe.

Near the end of the first season, Rush designed a program to decipher the Destiny‘s master code. The code would give him access to all of the ships systems and decks; we knew Rush would get the code eventually, and we knew the first place he’d likely go once he got it — the bridge. Whoever controls the bridge controls Destiny, and I don’t just mean the ship. Aftermath opens with Rush awaking from a fitful sleep, with the master code finally unlocked he decides takes a midnight stroll to the bridge of the ship. Rush is determined not to let anyone know he has access to the bridge until he has learned everything he can about how it operates. With the ship running low on food and supplies, he brings the Destiny out of FTL close to habitable planet. To the rest of the crew, this latest planet is just another pitstop on Destiny‘s mysterious trajectory — little do they know that Rush is now controlling the ship. Expect this to come up again in future episodes. With no functioning stargate on the nearby planet, Young dispatches a shuttle team to go reactivate the gate so that supplies can more easily be retrieved. Naturally, nothing goes according to plan and the shuttle ends up crashing on the planet. With time running out before Destiny’s next scheduled FTL jump, the shuttle team must repair the stargate or be left behind. 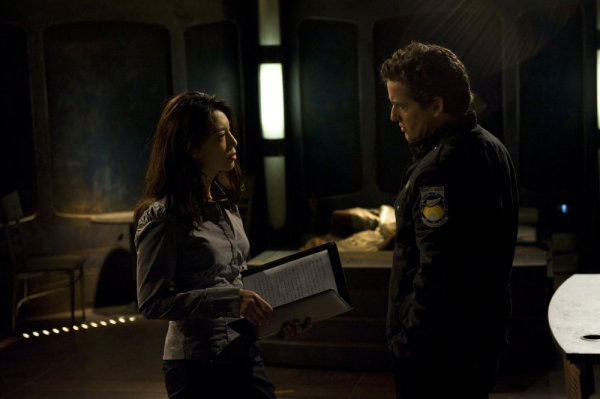 As Jeff pointed out in his review of the season opener, the ill-fated invasion of Destiny by the Lucian Alliance has conveniently added several new characters to the show: namely Ginn (Julie McNiven) and Simeon (Robert Knepper). The crew of the Destiny barely has enough food to feed themselves, let alone the large group of Lucian captives. Colonel Young make no secret that he is eager to be rid of them, especially after they left he and his crew to die on an uninhabitable ball of rock. His solution to the prisoners is to return the favour and drop them off on the nearest habitable planet to fend for themselves. Ginn on the other hand, who it turns out was forcibly drafted into the Lucian Alliance, wants the captives to be given a chance onboard Destiny, a cause that is beginning to win support from the likes of Camile.

Then there is Telford. With all his power and trust gone after the failed coup, he begins  acting as an intermediary between Colonel Young and the Lucians. He convinces Homeworld Command to keep key Lucian Alliance captives on board the ship for intelligence purposes and leave the rest of the prisoners on the nearest habitable world. Orders are orders, and Young goes along with it. New factions are beginning to emerge and battle lines that will define the season will be drawn in the coming episodes. Telford and Simeon will undoubtedly form some kind of pact which will bring them in conflict with Young and Rush, who will again be forced to work together despite their mistrust. 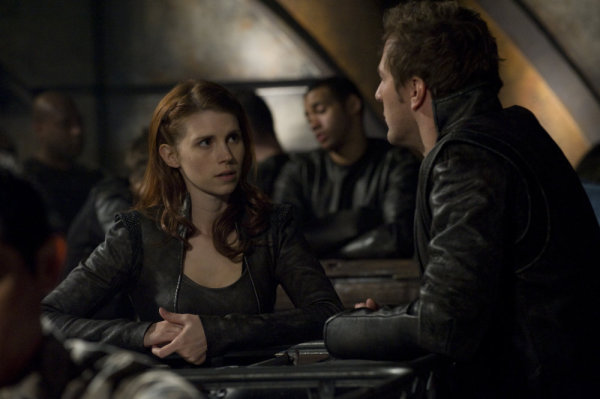 Aftermath is definitely a more well rounded episode than the season opener. It has a good balance of character moments and action, laying a lot of groundwork for future episodes. If this season of SGU continues with episodes like this, we’re in for a treat.

Some highlights/observations from the episode:

– Sgt. Riley’s sad lingering demise is expedited by Colonel Young in an extremely intense act of mercy. I flashed back to the final season of The Sopranos.
– Eli’s hilarious last minute warning that accidentally destroying or damaging a stargate could release enough energy to destroy the planet… seconds before Matt is about to detonate explosives to excavate the buried gate.
– Ginn’s recounting of her conscription into the Lucian Alliance. Warlords, propaganda, death threats; sounds like a fun place to grow up.
– Colonel Young’s repeated blows to the head. Still recovering from a nasty cuts, Young takes a Lucian elbow to the nose, adding a fresh wound to his barely healed face. I’m beginning to wonder if Louis Ferreira actually injured his face and the writers are just finding an excuse for his appearance.
– That shuttle crash was pretty impressive set piece. As they were going down I was looking around the cabin to determine who would be the sacrificial lamb for this episode. Sgt. Riley, welcome to Red Shirt Ville, population: You.
– Rush’s continued lying to Young and others about what he’s up to. You know he’s up to something, why are they so trusting?
– Telford’s mysterious release. Was it me, or was Telford not locked up with the Lucian prisoners at the start of the episode? Later in the episode he just shows up and tells Young he was communicating with Homeworld Command. Missing scene?
– Why does every planet in every Stargate series look like British Columbia? Just sayin’
– Doctor Park heard T.J.’s confession to Riley about her log cabin astral projection. That is going to come up again.
– So is Doctor Rush insane? He’s going all Gaius Baltar on us, talking to dead people that only he can see.