Based on the laughably implausible and cheesy late 1980s Fox television drama, 21 Jump Street fires perfectly on all cylinders to create an experience that will appeal wonderfully to fans of Hot Fuzz and the Bad Boys films. 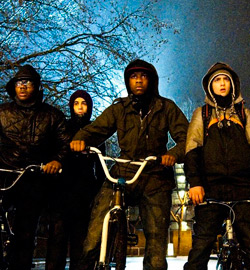 While mugging a young woman on her way home, a gang of South Londoners are ferociously interrupted by what they think is a meteorite striking a nearby car. Seeing the youths distracted, the woman makes a run for the nearest building which happens to be her home: nicknamed The Block. Upon closer investigation, the gang discovers the object that struck the car was not a space rock at all: it’s an alien.
For the past month director Edgar Wright has been rocking Toronto’s Bloor Cinema with his Wright Stuff film series.  Wright Stuff comprises films selected by Wright ranging from cult classics like The Warriors, martial arts flicks like Shaolin Soccer and even Canadian horror classics like The Brood.  Of course, Wright threw in a few of […]