We speak with Blair Witch writer Simon Barrett and director Adam Wingard about respectfully updating one of the most popular horror films of all time.

The Guest is a genre mashing blast from start to finish.

We talk to director Adam Wingard, writer Simon Barrett, and actors Dan Stevens and Maika Monroe about their work together on The Guest.

Win run-of-engagement passes to see The Guest in Toronto!

Enter for a chance to see an advance screening of The Guest in Toronto, Montreal, or Vancouver.

The Guest Midnight Madness Possibly the most fun film at this year’s festival, this unabashedly hilarious and thrilling mash-up of spy flicks and 80s slashers from director Adam Wingard and writer Simon Barrett, the minds behind previous TIFF crowd pleaser, You’re Next. Dan Stevens stars as David, an amiable and polite soldier just out of […] 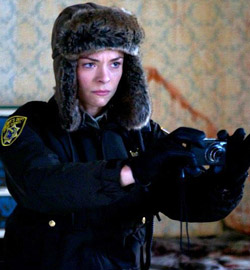