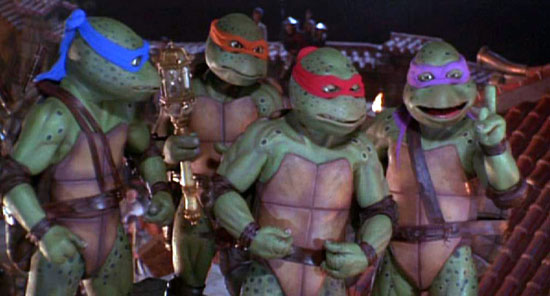 MTV’s Splash Page Blog recently sat down with Teenage Mutant Ninja Turtles co-creator Peter Laird to talk about the now confirmed live-action TMNT reboot. The Turtles are set to return to the silver screen in 2011 and Laird had this to say about the project:

“I can say that at this point there are a lot of positive feelings about a Batman Begins-style reboot, which would, of necessity, include a retelling of the Turtles’ origin story.”

Batman Begins-style reboot?  Darker is better, or so the producers believe.  The original comic books weren’t exactly for kids, but it will be tough for those Turtle Boys to shed their childish image after nearly 25 years of catering to kids. (Wow, saying that just made me feel really old.)  There are quite a few interesting tidbits that Laird drops in the article, including what effects they want to use for the Turtles, which characters he’d like to see appear in the film, and what story lines he’d like to pursue for the movie and its potential sequels.  If you grew up saying “cowabunga” on a regular basis, you’ll probably want to read this article.