Frank Castle is a good guy. That’s what we’re told again and again. But we don’t see him do good things. He is a quiet brute. A blood-stained sledgehammer. A torturer. A lone gunman and a mass murderer. His icon is a skull. But he is a hero, and framed as such in the new Netflix Marvel series that bears his nom de guerre: The Punisher.

To say The Punisher is problematic in concept is an understatement. A man without superpowers who elevates himself to the importance of the mutants, aliens, and cyborgs that inhabit his world simply through the ownership and liberal usage of firearms is a troubling second amendment fantasy in a country plagued by mass shootings almost every single day for over a year. Hypothetically, now seems like the worst possible time to solidify Frank Castle in the pantheon of MCU-era superheroes. But in practice, it’s not so simple.

In practice, The Punisher has different problems, but they aren’t related to the show’s depictions of violence. It shares the same general strengths and weaknesses as its streaming superpowered peers. The dialogue is clunky, especially early on in the series when secondary characters introduce themselves by practically reading their Wikipedia entries to each other. The pacing is hampered by a slightly too-long episode order (13 might feel on brand for the unlucky Frank Castle, but it’s still excessive for a streaming drama). And while it serves as an adequate reintroduction of a decades old Marvel persona, The Punisher assumes that you are on its protagonist’s side simply because he’s the main character.

But, like Daredevil before it, The Punisher delivers where it needs to. The conflict between mythological archetypes is compelling, especially during the introduction of on-again off-again comic book frenemy Micro (aka Microchip). And most importantly, the action choreography is exceptional. Death and violence drenches The Punisher. Depicted with stunning clarity and attention to the terminal moments of Frank Castle’s enemies, every painful action shines through the motion shown on screen, so I never had to wonder exactly where one goon got shot, or another had his skull broken. For The Punisher this clarity of action is especially key, since the show sets itself apart with its grotesque brutality.

The action sequences rain down adrenaline, catharsis, and malignant tragedy in The Punisher, always framed to emphasize that life is being extinguished at a great mental cost to Castle. We see Jon Bernthal wail and cry and scream as he pulverizes skulls with blunt objects, we see him dissociate as he snaps necks, and we watch his victims become corpses as the camera stays put for point-blank gunshots to the face. And while this might all sound very unappealing, the unflinching abandon through which the violence is framed in The Punisher is the key to justifying its existence. 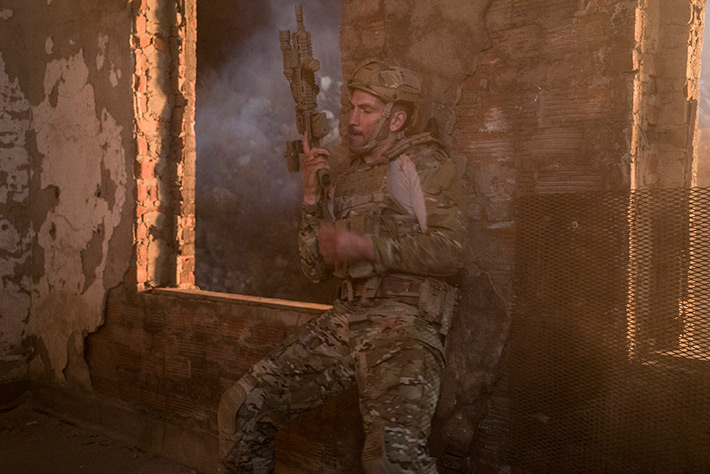 Frank Castle has post-traumatic stress disorder, and he’s not alone. The Punisher deals directly with the topic of PTSD as a mental illness, specifically through the lens of American veterans, among which Castle can count himself. Many scenes take place in a support group setting, where honest conversations and expression trump all else. The sharing of emotion, by humans who have seen true brutality and then landed in a superficial world that ignores the reality of senseless violence to the point of stigmatizing survival (see the villain’s motivation in Captain America: Civil War), underlines why post-traumatic stories mater from Marvel.

The Punisher does an admirable job of depicting PTSD symptoms seriously, sympathetically, and accurately. The repetition of Frank’s flashbacks to the murder of his wife shows the atritional nature of the disorder, replaying the scene with shocking violence every time — a gunshot, blood spatter on bright white linens, and the visceral reaction on Castle’s face. At one point early on, a secondary character is shown writhing alone on his bed, trapped in the throws of a hypervigilant episode. Characters consistently describe a sense of alienation that comes with the reintegration into a society that refuses to acknowledge the violent reality they were forced into confronting, and it never feels exploitative or heartless.

Where The Punisher fundamentally fails as a post-traumatic story is in its characterization of PTSD survivors as dangerous to others. It’s a common trope that has been visited everywhere from Grey’s Anatomy (in which the veteran Dr. Owen Hunt sleep-strangles Dr. Christina Yang) to a recent episode of Curb Your Enthusiasm (in which a veteran fan of Larry’s is triggered into attacking parking valets). But in The Punisher it stands out, because so many of the other details are well represented.

The aforementioned bed-writhing scene climaxes with the afflicted character accidentally shooting at his father in a fit of confusion. To the father’s credit, he embraces the boy, but such a depiction of a PTSD episode is over-simplistic for dramatic effect and risks building stigma by virtue of the rest of the show’s accuracy. The fact is, PTSD in veterans is directly linked to suicide, and research suggests that women veterans are statistically more likely to become victims of Intimate Partner Violence, which can in turn lead to the development of its own post-traumatic stress disorder. While there have been reports of PTSD resulting in domestic violence, especially when it is left untreated, the reality is that the afflicted are not solely dangers to their family but often the victims of abuse and self-negating ideology themselves.

As it pertains to Frank, the leaning into violence feels inaccurate inasmuch as one would expect someone as heavily traumatized as he is to want to avoid violence at all costs. But it is through his hyper violent vigilantism that we see his ascension from human to comic book god. Like his fellow post-traumatic hero, Jessica Jones, Frank Castle refuses to participate in a recovery group, and therefore becomes defined by juxtaposition. He is not on a road to rehabilitation, because recovery would destroy The Punisher. The Punisher cannot heal because he represents the static reality of an upsetting and often ignored truth: no one is safe from violence, which is brutal and real. 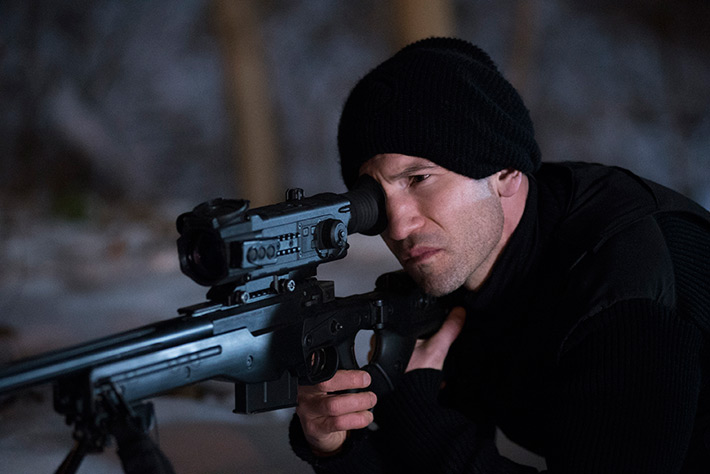 Frank Castle is a paradox. His PTSD gives him a license to kill, and that license in turn spreads trauma. Perhaps the biggest blindspot in The Punisher is its failure to account for the trauma of witnesses, emergency workers, and everyone else that must make contact with the chaotic detritus left in the wake of Castle’s personal war. In America, gun ownership on par with The Punisher’s arsenal is not a fantasy. It is a frightening reality that has scarred countless innocent lives this year alone. With every mutilated body The Punisher leaves behind for forensics investigators, detectives, and passers-by to find, he spreads his same license like a virus. For the same reasons we allow Frank Castle to wear his signature kevlar and murder people in public bathrooms, we must also allow his witnesses (at least the ones who develop PTSD) righteous vengeance on him. But even still, as a fictional construct, he is a vessel of catharsis for viewers like me.

A bullet is not a line vector of traumatic transference, but an ordinance blast of psychic energy. I learned this first hand when I saw my father shot in the chest by a stranger on a wooden pier in Costa Rica. The gunman ran as my dad crumpled. I made like a human crutch, dragging my father through the streets to safety. Blood soaked, we both survived. He has a scar. I don’t. At least not on the outside.

In the years following my dad’s shooting, I’ve experienced the gamut of post-traumatic stress symptoms. Flashbacks, hypervigilance, and avoidance. But a side effect of my trauma that no one ever prepared me for, even in treatment, was a profound need for expression. And it is through this expression that I came into contact with a harsh, rarely pointed to stigma: the oppression of positivity.

Outside of this essay you’re reading right now, I feel smothered by positivity. And while that sounds crazy considering the current global political landscape, it’s true. For over ten years, there have been things I have been unable to express because to even imply the darkness of living a post-traumatic existence sets off alarm bells, causing most people to retreat and a few well-intentioned individuals to fire divine beams of posi-vibes into my core, negating what I need to share to relieve myself from certain flavours of post-traumatic despair.

The Punisher is a safe space for me, because I can feel and express negative emotions in the discussions around it without triggering defensive reactions in people who worry I’m going crazy again. All of his brooding, near silent death dealing and inability to forget his trauma allows me to move into hypothetical territory when I need to talk about my illness in detailed terms. I need post-traumatic heroes like The Punisher, Jessica Jones, and Arthur from The Tick, because they express the negativity safely and on my behalf. They are a smokescreen through which I can find much needed relief when the rest of the world seems to forget its cruelty.

A Safe Space For Darkness 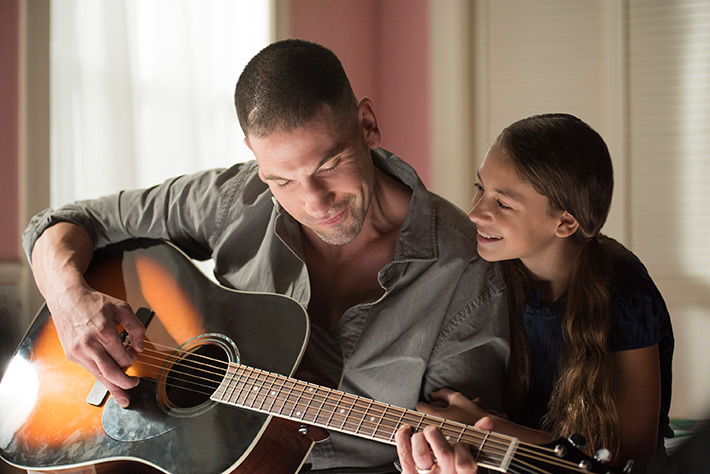 Frank Castle is a post-traumatic hero. While The Punisher omits the full scope of PTSD, its titular vigilante stands for something survivors need: through dark contrast, he highlights the unspoken privilege of a life lived in the absence of true violence.

In one of the show’s most striking sequences, a flashback war sequence set to White Buffalo’s “Wish It Was True”, this mission statement is delivered clearly and passionately. Puking in the adrenaline soaked afterglow of battle, Frank is confronted by a non-military man who is demanding results, speaking of murder simply as a statistic and mission objective. Castle, bellowing, socks the button-downed intelligence man in the face. You can’t understand violence unless you’ve experienced it, but everyone talks about it anyway. The idea of violence belongs to everyone, and that erases the experience of those who violence has transformed.

As a trauma survivor, I need this kind of media. I need this message. I need a safe space for confirmation of the violent reality I can’t leave in my past because of the symptoms I experience on a daily basis despite the objective safety in which I normally live. I need the cynical survivor who wallows and screams and writhes and doesn’t look away from the kill shot, because I had no choice when violence forced itself on me. I need the hero who understands brutality is a fact, and there is nothing shameful in acknowledging death and its atrocious compatriots. The Punisher is trauma embodied and visited on those who create it. He forces a confrontation with traumatic reality in a world of optimistic crime-fighting fantasy, and for all its paradoxical hypocrisy, that at least feels like validation.