The Woman in Black Review - That Shelf Skip to main content 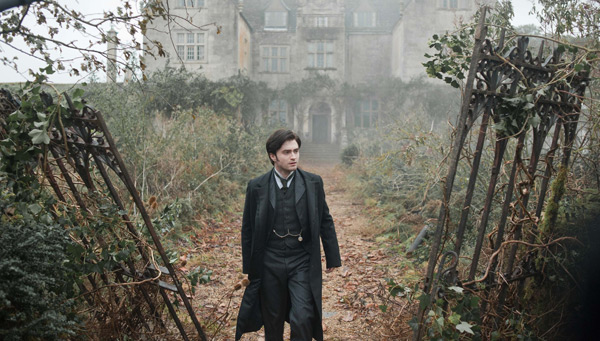 If The Woman in Black is any indication, Daniel Radcliffe will be very savvy when it comes to choosing his post-boy wizard roles. A pitch perfect bit of period horror with menace to spare, this is exactly the kind of film that Harry Potter fans who grew up with the actor would just be starting to get into at their point in their lives. While not reinventing the wheel in any way, director James Watkins has crafted a thoroughly efficient and thrilling genre exercise that evokes favourable comparisons to the works of Wes Craven and Sam Raimi.

At first, it might be a little surprising to see just how much Radcliffe has grown up in the role of Arthur Kipps. Radcliffe not only plays an adult here, but a young, widowed father of a young boy. Arthur is an early 1900s legal aide forced by his boss into getting back to work by sending him from London to the coastal countryside to go over the paperwork of an estate currently up for sale. Upon his arrival in the village where he intends to stay, the locals do everything in his power to send Arthur away before he even makes it to the secluded former estate of Alice Drablow. Driven by the desire to provide for his son and to keep his currently tenuous job, Arthur presses on and learns the hard way the tragedy that befell the residents of Marsh House.

All great horror forces the audience to pay extremely close attention to the frame. No one wants to be made a fool of and knowing audiences will be quick to spot exactly where the film’s requisite scares will come. Watkins (who previously directed the little seen, but hard to watch gem Eden Lake) gets his Craven on by knowing exactly what the audience is looking for. Much like Craven with his Scream films, Watkins plays into the viewers’ expectations only for so long. When Arthur looks around a corner to see there’s nothing there, Watkins gives the audience what they want by not having anything there and by not immediately following it up with a scare or shock effect. He’ll give it a few moments before the real scare comes. Watkins’ sense of pacing borders on uncanny as this might be one of the most well crafted haunted house movies in quite some time. His attention to period detail and an incredible art department also deserve a special nod of merit.

The echoes of Raimi come in via writer Jane Goldman’s adaptation of Susan Hill’s novel, which was previously a stage play and a 1989 BBC made-for-television production. The story gains favourable comparisons to Raimi’s well-liked Drag Me to Hell. This is another tale of someone forced into taking a job for the sake of monetary gain that is then drawn into the world of the occult. As the events of the film become more and more intense, the comparisons to Raimi’s work intensify, but whereas Drag Me to Hell was ostensibly a comedy, Woman in Black is deadly serious, making for a more satisfying viewing experience.

As for Radcliffe, large parts of the film require him to be stranded at the Marsh House by himself for long periods with no one to play off of. While his soulful performance as Arthur serves him well playing opposite the townspeople (especially a terrific Ciaran Hinds as the town’s sole skeptic and Arthur’s only ally), it’s the scenes of relative solitude that makes the performance come together. Hardly speaking, he has nothing to do but actually create an entire character arc for the middle part of the film simply with actions and glances.

It’s a no-brainer for Radcliffe to take such a difficult role in a relatively safe genre. The film aims for the older audience that made him a star, and certainly not the younger crowd. Without spoiling some of the film’s best scares, anyone who brings a young child to see this film is clearly out of their mind. Then again, this is the stuff teenage nightmares are made of. It’s the kind of movie that it feels just slightly naughty to be watching in someone’s basement or sneaking into after buying a ticket for something else. Mainstream horror audiences have been craving something original for quite some time, and Radcliffe and Watkins are more than happy to give it to them.