“Code black” is the hospital term for what occurs when the emergency room is too backed up with patients to meet the demand for beds, doctors, nurses, and various other potential case workers and resources, and the pressures of such a situation that are often the result of bureaucratic nightmares are on full display in Ryan McGarry’s narratively unstable, but still eye opening and refreshingly frank documentary.

McGarry takes a look at the American health care crisis largely through the eyes of still relatively young doctors and nurses who work in and around the C-Booth at Los Angeles County Hospital, a small space where more lives are saved and lost than anywhere else in the United States in a given year. These are professionals who enter high profile, stressful jobs with the best of intentions, but they’re soon sobered by the enormity of their job.

McGarry can’t quite seamlessly mesh together the film’s scenes of the hospital going through its day to day business with the more interesting discussions with those involved with the staff. The frustrations these doctors feel with a morass of paperwork and legalese is palpable and heartbreakingly real. When one doctor says he spends only 2 minutes out of every 30 minutes with a patient, and the other 28 filling out paperwork, it’s hard not to feel for him and everyone else who has taken an oath to not do harm, despite working with a system that isn’t exactly conducive to proper physical and mental healing.

Also at the Bloor this week:

The only new release this week is Code Black, but there are several promotional screenings of the fictional Canadian comedy Dr. Cabbie throughout the weekend. That film opened today and was only screened for select press, so we never saw it. We assume it’s about a cabbie who is also a doctor. 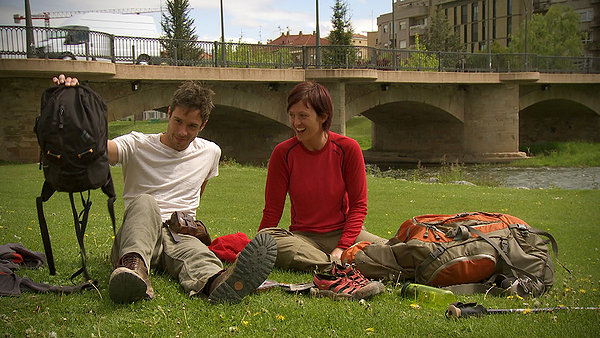 Making yet another return engagement is Walking the Camino: Six Ways to Santiago with screenings every day through Wednesday the 24th.

Saturday at 1pm, there is a special screening of My Brother’s Vows (which screened once post-TIFF last week). Stephanie’s brother Gregor is about to make the biggest decision of his life. Having joined the Catholic order of the Society of the Divine Word (SVD) to become a missionary priest, Gregor is about to take his final vows and commit to a life of chastity, poverty, obedience and service to the Catholic Church. Critical of his choice, My Brother’s Vows is Stephanie’s attempt to understand her brother’s decision and explore his world behind the thick monastery walls.

The This Film Should Be Played Loud series continues on Saturday night with a healthy dose of rock in Live Forever: The Rise and Fall of Brit Pop at 9:30pm. Live Forever captures that moment in the nineties when politicians recognized the emergence of a vibrant British popular culture and seized it, guerrilla-style, to re-brand the country. It is the story of Oasis, Pulp and Blur, from a time when British galleries, catwalks and records were the envy of the world and British culture truly rocked. Doors at 8pm, $5 Steamwhistle tall boys, and a DJ set as always.

On Monday, the Bloor Takeover series – where a prominent writer, artist, or personality takes over the theatre’s booking for the evening – kicks off with journalist David Sax (The New York Times, Saveur) talking about stoner comedies with an esteemed panel of food experts (including Chef Anthony Rose, food writer Corey Mintz, and cocktail guru Aja Sax) and followed by a screening of the still underrated Harold and Kumar Go to White Castle. Also, after the film there will be mini burgers! Tickets are $22 and include a cocktail, popcorn, and burger. Pretty great deal and idea. It kicks off at 6:30pm.

Those looking for a more fitness minded and worldly experience should check out Australia by Bicycle: A Lunatic Excursions Production on Thursday at 6:30pm. Ontario’s own Ian Evans will be on hand to screen footage of his epic bike ride across the Australian outback over 57 days and 5,000 kilometers. He’ll be raising money for his next trip: a potentially dangerous 850 kilometer journey from the coast of Antarctica to the South Pole on skis. There will also be live music. Tickets are $15 and can be purchased at this link, when you can also find more information about Ian and his journeys.