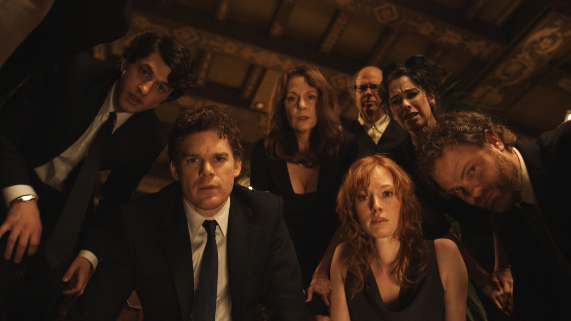 Peep World is about a family full of hatred for one another getting together to celebrate the patriarch’s 70th birthday. Unfortunately, depicting 24 hours with 14 characters rehashing one family’s entire history is far beyond the scope of this 90 minute film. So many things are breezed over and simplified that the viewer is left wondering what the point of it all was. The dysfunctional family has proven excellent fodder for stories like The Royal Tenenbaums and Arrested Development, to name only two of the titles that this film evokes but never matches.

If anyone read my TIFF picks and bought a ticket to Peep World based on my speculation that it was worth your while, I would like to take this opportunity  to apologize. Shortly after I posted that I was notified by a friend who had seen the film that my choice was misdirected and that the movie was “abysmal.” While I wouldn’t choose a word so harsh to describe a film that did make me laugh a few times, most of it felt like a lesson in how not to write a screenplay.

Lesson #1: Narration is a must. Within the first couple of minutes, we hear Lewis Black as the narrator tell us a bit about the extremely volatile family we are about to spend some time with. While he’s talking about the flawed characters, what he’s really telling us is that this is going to be a flawed film with voice over attempting to fill in the gaps.

Lesson # 2 Include lots of expository dialogue. The many emotional outbursts throughout the film consist of characters simply yelling how they feel or what they’re thinking instead of acting out their feelings in a more interesting and relatable way. I’m no psychiatrist, but I think if a real family were ever this is this upfront and blunt with one another, they would be the most functional family ever.

Lesson # 3 Change up the tone as much as possible. The film switches too fast and too frequently between broad humour and family melodrama. It’s difficult to follow an overlong scene about an unwanted erection at a book reading with a domestic dispute over a husband’s proclivity towards porno booths and expect viewers to take the ladder seriously. Many movies can be both funny and tragic, but it takes some skill and finesse to blend them properly, see Little Miss Sunshine for an outstanding example of this. Peep World would have benefited greatly by lowering its dramatic aspirations and concentrating more on the comedic strength of the cast.

Lesson #4  Do not have a protagonist that the audience can sympathize with. This film has no protagonist and all of the sympathetic characters are there only as spouses or partners to the immediate family members and thus remain in the film’s periphery. Part of sympathizing with a character is understanding his or her motives within the context of the story. The biggest conflict the story attempts to focus on is a very successful book the youngest sibling has written that happens to be a tell-all portrait of the family, what it’s actually about we are told almost nothing. We know that he writes about his sister as an unsuccessful artist, one brother’s struggles with drugs and another’s secret porn habits, but how can a book about such common, minor offenses be so popular and controversial? I guess one could call the book a ‘McGuffin’, but this isn’t Pulp Fiction and unlike the briefcase, the actual contents of the book will not be pondered post-viewing because the audience won’t care about any of the characters who have had their courses changed by it.

Lesson #5 . If you can’t think of an ending, fade out. While I suppose one or two things kind of get resolved, the film ends abruptly by Lewis Black telling us what happens.