The badlands are not for the weak. The titular post-apocalyptic Midwestern setting of AMC’s newest series, Into The Badlands, is filled with beautiful violence and terrifyingly brutal human beings. It goes without saying that to be one of the seven feudal leaders of the show’s fantasy realm requires a larger than life badass-factor, and I spoke to Emily Beecham, the woman behind badlands matriarch known as The Widow, to see what it takes to rule in the far flung, martial arts obsessed future.

1. The Widow will kill for equality

“Women don’t really have a very strong voice or much control of their destiny in the badlands,” Beecham tells me. And it’s true. From the first episode, it’s apparent that women are generally regarded as second class citizens in the badlands. The Widow, who received her namesake, through the death of her baron husband that left her in power of her own post apocalyptic kingdom, is framed as an antagonist in the show’s first episode. But as viewers are given a better look into her motivations, it’s clear The Widow is far from villainous, even if her methods are a little more murderous than your average benevolent ruler.

“She wants equality for men and women,” explains Beecham. “I think she’s an idealist. I think her goals are fair and well intentioned. Though, she is violent, but in the world of the badlands that’s the way to survive. Once in awhile you have to kill people.”

2. The Widow is inspired by feminist literature

It’s impossible, given Beecham’s portrayal of The Widow and the context of Into the Badlands, not to see her character as a sort of feminist hero. This is no accident. Beyond her goals of gender equality throughout the badlands, The Widow emanates power in a world where women are normally delegated to the shadows behind powerful men. Beecham says she looked to feminist literature and strong women for inspiration.

“There’s hundreds of women that I’ve taken inspiration from, and hundreds of feminist books, to get into the mindset,” she says, citing Germaine Greer among her role models in preparing for the role.

3. The Widow is a maternal role model to young, deadly women

Speaking of role models, The Widow is more than just a post-apocalyptic baroness, she’s also a maternal figure to a cadre of teenage assassins called The Butterflies.

“She’s not any of The Butterflies’ real mother. But she is maternal. I think she sees a lot of them reflected in herself when she was younger.”

The Widow’s feminist life philosophy is fully at work in her relationship with her adoptive deadly daughters. “She’s mentoring these young women and wants them to learn that they can also be in the position that she’s in—they can also have an equal voice to me. And that they have to fight for it. That they can’t just sit back. It’s gonna be a fight.”

“I’d never done martial arts in a show before,” says Beecham as our conversation moves toward the spectacular fight scenes that anchor Into The Badlands. She tells me that co-star Marton Csokas has fighting experience, and Daniel Wu (who plays the series protagonist, Sunny) has trained in Wu Shu, according to his bio. But for Beecham, “This was a first for me. I was learning the ropes.”

“We did a five week training,” she says. Working with Master Dee Dee, the martial arts coordinator famous for his work with Jet Li and Stephen Fung – the series fight director – Beecham says the cast worked on small choreographed sections to see what everyone’s strengths were.

“Stephen is extremely laid back and a chill guy,” says Beecham. “which  is amazing because he’s so great at choreographing and directing these fight scenes.”

“Fist Like a Bullet” is the second episode of Into The Badlands, and it begins with an extended fight scene featuring The Widow as she murders a former subject and a bunch of angry bar goons.

“That was the first fight scene I filmed, and we learned quite a few of the moves.” Beecham learned to back flip on the wires, which can be quite difficult to even just balance on, as well as other techniques while preparing for the role.

During the training period, “Master Dee Dee and Stephen Fung were watching to see what our strengths were. And so [the fight scenes] weren’t choreographed before we went in,” says Beecham. She would walk onto the set, be taught about five moves, memorize them, run the sequence a few times and then shoot it on film performing at double speed.

The only stunt form that first fight that Beecham needed to hand off to a stunt double, was sliding up to standing from being in a pair of splits while wearing stilettos. Just typing that out makes the act feel impossible.

“I just couldn’t do it,” she admits. “And the Chinese stunt women are like, “It’s easy.” They’re sort of shrugging their shoulders. And I said, ‘What part of your body do you use to hoist yourself up from a pair of splits in a pair of stilettos?’ They’re like, ‘Uh… your legs.'”

“Me getting out of a pair of splits: I need to roll on my side.”

6. She weaponized her yoga and ballet experience

While this might be a new experience for Beecham, she tells me that she’s not totally out of her element in the fight scenes.

“I’ve done a lot of yoga and ballet actually before it,” she says, “Which was very helpful for all the flexibility and anything I had to do with my legs.”

7. Beecham helped make The Widow who she is.

From what Beecham tells me, it is clear that the character building process on Into the Badlands was a collaborative effort. So, all of the badass qualities that we see on screen, as The Widow eviscerates her enemies with knifes and her razor wit, much of that comes from the actress herself.

“We thought a lot about the costume and what she wanted to say; what kind of image we wanted to portray with her,” says Beecham on developing The Widow. “Her costume and all sorts of different things. I like the fact that the show is interested in the bondage kind of look.”

In addition to the feminist role models and important women she drew on for inspiration, Beecham tells me she also looked to remarkable men while exploring The Widow’s image. “I wanted some kind of masculine sort of edge to her.”

When I ask about her favourite aspects of the character, Beecham isolates the character at her most powerful: “I like that she’s a bit idiosyncratic. That you don’t really know what she’s going to do next. She sort of contradictory. She uses her sexuality but as a tool, and she is manipulative and cunning. That’s fun to play. And also she kicks butt.” 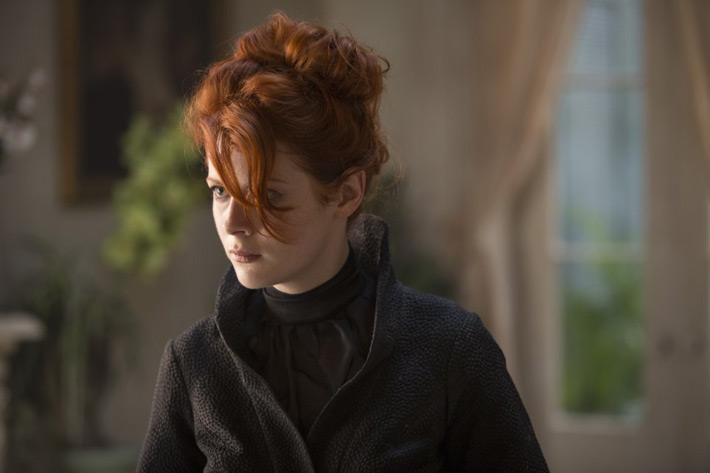 8. She is able to drop into the completely unrelatable world of Into The Badlands

As relatable as The Widow might be to a progressive audience, the world of Into the Badlands is not something at all familiar to the live action TV landscape. The argument can be made that it’s more like Japanese anime than anything else. Whatever the case though, the show’s world is alien and byzantine, requiring a huge suspension of disbelief on behalf of the audience.

While the story and setting of the show may be new for everyone involved, Beecham is a veteran of genre work, having been in 28 Weeks Later and lent her voice to the video game Mirror’s Edge. She tells me that the key to dropping in to such a “cocktail of odd genres” is collaboration and communication.

“We talked to the writers a lot — some of us actors — and got to discuss it with them so we understood what the world was like economically, and politically, and how we got there. So that we could understand where our characters were in this really surreal land. To try and make it as real as possible for us.”

9. Her dork shelf is filled with old vintage items

Beecham describes herself as “a bit of a nomad at the moment,” so when I ask her what’s on her dork shelf she has to think back to when she last had a room of her own. “I hold on to old items,” she says. “Oh god, what’s on my dork shelf? Probably an excess of vintage, if that’s dorky enough. Weird old vintage things.”