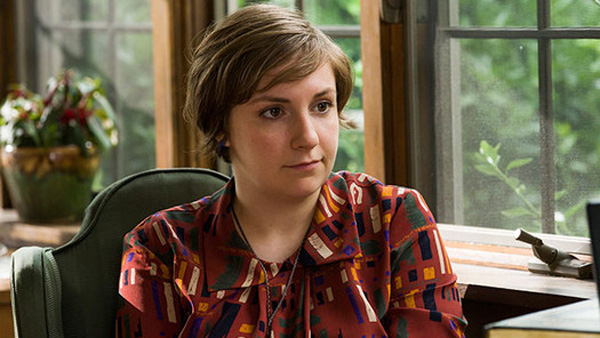 Hello dear readers. I hope you had a lovely week! I did my taxes, so I checked that box on the adult checklist (totally a thing).

Okay, so I got someone to actually do my taxes for me.

Ugh. FINE. I just gathered paperwork and put it into a bag! But I will totally do them on time. I’ll show you, show you all!

So now, on to Girls! This was the first “capsule episode” of the season, solely focusing on one of the characters outside of the regular world of the show.

The story starts off with the sad news that Hannah’s grandma Flo is going to die. What was originally just a visit to the doctor for a broken femur turned into pneumonia, which then turned into dying. Bad news for Hannah and for anyone already terrified of hospitals.

So Hannah is off to visit her dying grandmother while Adam stays in New York, as it is the first week of Broadway rehearsals.

At the hospital we find Hannah’s Aunt Margot who is…

…handling her stress by contorting her face.

Hannah meets up with her mother Loreen and her aunts Margot and Sissy. We’re unsure where Hannah’s dad is, but hopefully he is healthy and unaffected by anything to do with that small mole he removed a few episodes ago. After just a few minutes of interaction between the women, it’s obvious that not all is well within the family. While they all put on smiling faces for Nana Flo, bickering gives way to the realization that Hannah’s elders have frayed relationships with one another.

Outside of the hospital, Hannah and Loreen try to unpack the reality of a matriarch dying before their eyes. Loreen laments:

“You think you’ve accepted that your mother wasn’t that good. And then you realize you’ve always had this hope that there would be a conversation where the two of you would have some kind of breakthrough. When they die… that conversation can never come.”

Girls never ceases to bring up universal, unspoken fears, does it? Even if you have a fantastic relationship with your parents now, you can certainly empathize with Loreen. The sadness is bolstered by a fantastic performance from Becky Ann Baker. Damn it, fictional show, stop making me feel feelings!

While I’m off in the corner pretending it’s raining on my face, Hannah is a bit less affected. As a granddaughter, Hannah has a very different vision of Nana Flo and cannot accept that she would ever be able to inflict social cruelties upon her children. After all, Nana sends her cutout Cathy cartoons! She also has skin “like a kitten’s ear” (note: don’t let Dove hear about this, or they’ll place Nana Flo in a “Real Beauty” campaign on her deathbed).

An emotional Loreen then asks Hannah to pretty please pretend that she is getting married to Adam. Apparently a little deceit is all it would take to make a patriarchy-loving woman happy these days. Hannah is very resistant to this, and I’m unsure why: 1) she would get to make her grandmother enormously happy and be a hero, and 2) she would get to invent the most lavish and perfect proposal of all time without the stress of having her mildly psychotic boyfriend actually commit to sharing his life with her. Not understanding these fantastic points, Hannah merely says she’ll think about it.

At Nana Flo’s house, Hannah meets Cousin Frumpy Bitch (government name: Rebecca). “Elena, it’s mean to judge someone on their clothes!” you might say. I would normally agree with this notion, but there are exceptions. One such exception is when a person with enough money at their disposal chooses terrible clothing. I call this the “Guy Fieri/CeeLo Green exception”. The second exception is when a person is an unabashed asshole. Enter Cousin Frumpy Bitch:

To which I say:

Now, why is Cousin Frumpy Bitch (CFB) such an asshole? OH, let me list the ways!

1) When Hannah tries to lighten the mood by calling Nana “Old Flo Job”, CFB pitches a fit. In the grand scheme of things, this wasn’t that bad. At first I was all, “whatever, she doesn’t want to associate her grandmother with blowing a dude. Her curt retort is kind of reasonable. She’s just bein’ sassy like the Dowager Countess on Downton Abbey!”

2) CFB refuses to visit Nana Flo in the hospital because she’d like to remember her as a healthy, wrinkly little Ewok. As much as I can relate to not wanting to see a grandparent in a sickly state, this isn’t about you, CFB. This is about comforting Flo on her deathbed. This is a dick move.

3) When Hannah congratulates CFB on getting into med school, she cracks a joke about her hope that CFB gets to be around hot doctors like in Grey’s Anatomy. This is totally a reasonable thing to say to a family member you haven’t seen very often. CFB’s response?

4) Hannah apologizes (because that’s what you do when you try to de-escalate conflict) and then cracks a joke about how great it is to have a doctor in the family, as she can now fulfill her dream of being able to text someone with medical questions at all hours. CFB then uses Power of Not Understanding Humour:

“I’m not studying 15 hours a day to fulfill your dream.”

CFB then leaves the house, but not before asking Hannah to go out for a drink with her. Sorry if all that cuntiness threw you off, Hannah, but apparently this girl wants to be your friend.

Also at the house are Loreen and her two sisters, who are attempting to parcel out their mother’s belongings, right down to her drugs. Despite the drugs only being prescription pills, you just know Nana Flo has some potent magic mushrooms from the ‘60s lying around that the women will dissect later.

The sisters inevitably get into a fight, with Aunt Sissy playing the “I should get mom’s engagement ring because I am literally a cat lady who started a support ground for the childless” card. Poor Hannah can only look on, attempting to figure out what part of her family history is real and what part is simply explosive exaggeration on the parts of the women.

Upstairs, Hannah calls Adam and recounts her mother’s fake engagement request. Our girl reasons that this is not a flat out lie, as being married to Adam is a possibility. When Adam hesitates in affirming her thoughts, Hannah questions Adam’s commitment through flustered sentences. An assurance of “I am very committed to you at this time” does little to smooth over the situation, and Hannah articulates that the uncertainty of her own feelings on the marriage issue makes her stressed and angry for reasons she can’t fully understand. Dum dum dummm.

Later in the evening, Hannah meets Cousin Frumpy Bitch at a bar. There, we add more entries onto the list of reasons why CFB is terrible:

5) CFB is dating a man who is in a relationship, which she finds convenient, since she has to study do much. I find CFB’s status as the “other woman” dubious.

6) CFB calls writers “a ridiculous class of people who tend to make everything about themselves. And they have bizarre, strange eating habits.”

Just to spite her, I ate some sliced salami out of a Loblaw ziplock bag while writing this article.

7) CFB states that not only is Hannah not funny, but that their grandmother thinks she is “loose”.

8) CFB, an adult woman, thinks it’s okay to call vaginas “chachis”. This is not a reason why someone is an asshole, but I dislike her so much that I am including this on the list, because COME. ON. That term’s not even on Urban Dictionary!

Since she’s terrible, CFB texts and drives, and crashes the car her and Hannah are in.

Adam rushes to the hospital to make sure Hannah is okay, and while there, he witnesses a fight between the sisters. During the fight, CFB smiles, because she is the devil.

Adam assures Loreen that she shouldn’t feel embarrassed about the fight, as “it’s like enchilada night at my parents’ house.” Seeing as Adam’s sister is Caroline, I’m inclined to believe him.

After the fight subsides, Hannah and Adam go in to see Nana Flo. In an endearing move, Adam tells Flo that he and Hannah are getting married next year. The old woman then grabs Hannah’s hand and dispenses this last shred of wisdom:

“Someday you will look at him, hating him with every fibre of your being, wishing that he would die the most violent death possible. It will pass.”

At first I just laughed at this last advice, but the more I thought about it, the more meaningful I found it to be. A long relationship with someone you care about takes work. Day in, day out, trying not to yell at them about taking out the garbage, work. This applies to not only romantic relationships, but to all areas of life. Even a career will frustrate you, no matter how much you love it. Nothing you care about is going to be joyous every second, and that’s okay.

Outside of the hospital room, Hannah jokes with her mother that if Flo lives, she’ll have to marry Adam. It’s at this point that Loreen confesses that while she thinks Adam is nice, she doesn’t think he is The One for Hannah:

“I don’t know him very well. I see certain things. He’s odd, he’s angry, he’s uncomfortable in his own skin. He bounces around from thing to thing. I don’t want you to spend your whole life socializing him like he’s a stray dog, making the world a friendlier place for him. It’s not easy being married to an odd man. It isn’t.”

Holding back tears, Hannah can only muster: “He just did something very nice for you and you’re being very unkind.”

The next day, Nana Flo is all better! The good news puts everyone in a good mood, and the sisters realize that their bickering in the highly emotional situation should not have gotten in the way of their bond. We also find out that the secret to Nana’s soft skin is hand lotion. Also the march of time.

Oh what’s that? Had a cute, warm and fuzzy moment with grandma there, Hannah? Feeling that comforting lull? Well, life’s here to give grandma a surprise heart attack after you left the hospital, because life, much like CFB, is terrible.

God damn everything, this was so sad.

Overall opinion: To be able to capture the complexity and love between family members and lovers, and also the anger involved in becoming the caretaker for someone who was once your caretaker all in one episode is an amazing feat.

Often, punchy “in your face” writing the like of Aaron Sorkin’s is held up as the pinnacle of “good” writing. The tendency among the viewing public to equate quotable put downs and speeches with talent sadly means that less bombastic writing gets overlooked as either not memorable, or not as clever. We seem to forget the skill it takes to create a script that breathes, that feels cinematic, but at the same time feels real enough to make you cringe with empathy. This episode was a great reminder that Lena Dunham has talent in spades.

Hannah, in response to her mother’s marriage request: “I really thought you were more progressive than that.” Loreen: “I’m not.”

Nana Flo: “I ate one cheese sandwich and I’d like another.” (a woman after my own heart!)