A Silk Letter Review - That Shelf Skip to main content 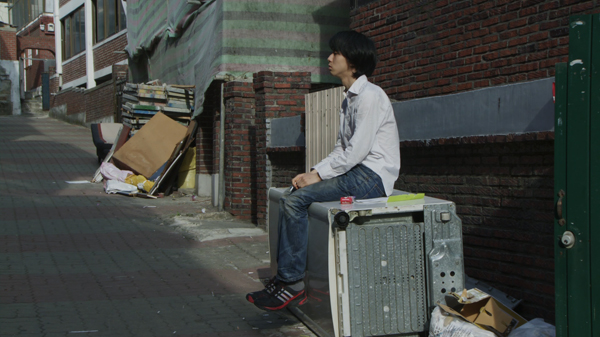 Shortly following the debut of his film at VIFF in 2010, Korean director Kang Sangwoo was imprisoned for two years for conscientious objection against his country’s forcing of young men to take on 27 months of military service. His film opens with a young man named Sungwoon (Seong Hojun) burning his draft notice under a highway overpass and near the water just around dawn so he can stay with his younger, high school dropout lover (Choi Jinhwan).

The opening scene of Sangwoo holds two purposes, as not only does it establish A Silk Letter as a deeply personal featurette coming from the heart of the person who made it, but it also establishes the film’s languid, contemplative tone. The emotion works quite well, but there sadly isn’t enough of it to sustain even a running time of less than an hour. Sangwoo straddles the line between making a straight-up art film and a relationship narrative and never comfortably exists on either side of the fence.

There’s not too much actual plot between the lovers, but merely a push and pull. Both of these guys are so deeply infatuated in the way that young love often feels that Sangwoo does a nice job of recreating that intimacy when they pair is together. It shows that these are young men and the folly of their own emotional intelligence. Whether they are fighting or sharing a tender moment expressing their feelings about their given situations, Sangwoo definitely seems like he’s onto something, and this is the film that should have taken the spotlight over the one he ultimately made.

Much of the film’s running time gets taken up by Sungwoon not really doing anything exciting or lengthy shots of the world around him that go nowhere. A snail crosses some pavement. A cat sniffs some garbage before running down an alleyway. Sungwoon walks for ten straight minutes only uttering a single line. Sangwoo confuses romance with romanticizing, and he loses a lot of emotional steam. It’s admirable to aim for art, but this particular long take style of filmmaking drags the story down, and in the wake of filmmakers like Apichatpong Weerasethakul and Patrick Wang (In the Family) doing similar things, it’s hard not to feel like the movie is more in love with itself than the characters within it.

And I suppose that’s ultimately the downfall and risk one takes in making a film that’s so personal. By the time the titular letter is dictated in one of the most powerful scenes in the film, everything logically ends, but Sangwoo drags the film out for another 15 minutes where absolutely nothing happens and the shots aren’t interesting enough to make the viewer feel any sort of shared congnitive dissonance with the lead. The film tries way too hard to be brooding, and while it’s not short on emotion, Sangwoo seems confused as to how to deliver on it effectively.

Also screening with A Silk Letter is the Canadian short The Golden Pin, an audience favourite from the Inside Out festival last year, which focuses on a Vietnamese-Canadian swimmer struggling with his sexuality and looking for acceptance from his family when everything around him seems like a mess. It’s not the most polished short, but it’s definitely more of a crowd pleaser than A Silk Letter would likely be.