For the past decade, superhero flicks have owned the box office – we live in a world where an Aquaman movie earned over a billion dollars. But when it comes to the films that own our hearts, superheroes rank at a distant second. It’s movies like The Little Mermaid, The Jungle Book, and The Lion King that makeup moviegoers’ fondest childhood memories. So, when Disney steps up to reboot a beloved animated title, “they better step correct.” But judging by the reaction to Disney’s live-action Aladdin remake, they really “blue” it.

Check out the trailer and see what you think.

People are not feeling this early look at the movie. The millisecond after the trailer premiered at last night’s Grammys, Twitter was ablaze with users taking shots at Will Smith’s Genie. Viewers don’t like how the character looks; most can’t get past his dark blue skin colour. The meme-brigade’s posts range from Avatar comparisons to Tobias Fünke jokes. Most unsettling, though, wasn’t his unnatural skin colour. Seeing Smith’s mug pasted onto his CGI character has a creepy uncanny valley effect. Freaking people out is the last thing you want from a family movie. Ask Tom Hanks.

It sounds reductive but making a blockbuster movie – even one based on a sure-fire concept – is no easy task. A studio must hire the ideal screenwriter to pen the right script. They need to hire a director who can execute the studio’s vision. They need a solid cast that has chemistry, and they better attach at least one big-name star. The Studio also needs a solid trailer to build hype, a smart ad campaign, and they better hope there are no PR slipups in the months leading up to the film. And finally, the studio must sit back and hope that the audience shows up at the theatre. When a film like Suicide Squad earns hundreds of millions at the box office, it’s damn near an act of god.

But the trickiest part of all falls outside of the studios’ hands. Movies, especially remakes based on classic titles like Aladdin, must live up to the ideal moviegoers have inside their minds. The more sentimental they are about an intellectual property like Ghostbusters or Harry Potter, the tougher it is for a follow-up to fill those movies’ shoes.

Disney released their animated feature Aladdin in 1992. A box office monster, Aladdin earned $504,050,219 worldwide. And 27-years later, parents who grew up with the Disney classic continue sharing the movie with their children. Aladdin also still lives on with its own cartoon series, toys, video games, and cosplayers at every Con imaginable. Aladdin isn’t just an animated film, it’s a classic in Disney’s pantheon of family movies, and no matter what the studio does to appease its audience, their efforts won’t live up to the long-time fans’ expectations. 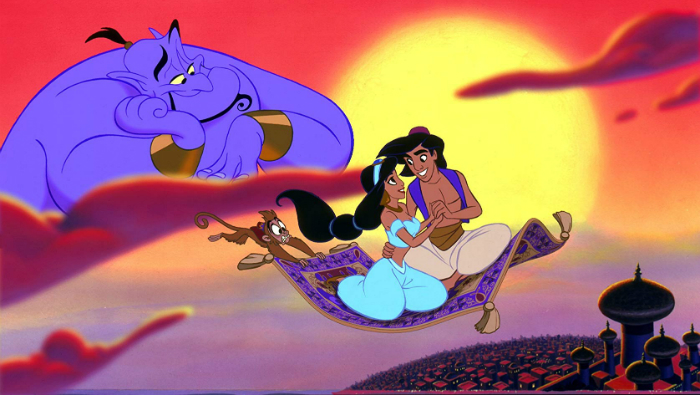 One of the reason’s Aladdin gives people the warm fuzzies is because of Robin Williams’ all-timer of a performance as the film’s bombastic blue genie. With Williams passing in 2014, there isn’t another actor on the planet capable of stepping into the role without catching some heat. But what if your life was on the line, and you had to cast the perfect replacement? I say that you couldn’t do better than Will Smith. He’s one of the most successful and most importantly, likeable actors on the planet. And after last night’s trailer premiere, even he’s catching flack.

Does Smith look ridiculous as a Smurf-blue genie? Of course. But no sillier than Age of Ultron’s Ultron, Ragnarok’s Korg, or Civil War’s The Vision (especially when he dresses in sweaters). This is a movie featuring a talking parrot and a self-aware flying rug. Ridiculous is all part of the fun.

Disney’s The Jungle Book and Beauty and the Beast remakes are both solid films. I’ll give Disney’s upcoming slate of adaptations the benefit of the doubt, no matter how weird things look in their trailers. And besides, over-the-top Will Smith is the best version of Will Smith. So, I say let the man genie his ass off. Let’s all reserve judgement until Aladdin rolls out in late May.

Here is what Disney has to say about their upcoming title.

A thrilling and vibrant live-action adaptation of Disney’s animated classic, “Aladdin” is the exciting tale of the charming street rat Aladdin, the courageous and self-determined Princess Jasmine and the Genie who may be the key to their future. Directed by Guy Ritchie, who brings his singular flair for fast-paced, visceral action to the fictitious port city of Agrabah, “Aladdin” is written by John August and Ritchie based on Disney’s “Aladdin.” The film stars Will Smith as the Genie; Mena Massoud as Aladdin; Naomi Scott as Jasmine; Marwan Kenzari as Jafar; Navid Negahban as the Sultan; Nasim Pedrad as Dalia; Billy Magnussen as Prince Anders; and Numan Acar as Hakim.