Art-O-Bot is a continuing series of profiles on local, established, and up-and-coming comic artists. This week we are proud to bring you Adam Hughes, Scott Wegener, and Agnes Garbowska.

Hughes is one of the comic book world’s most celebrated cover artists.  This is not to say he doesn’t know how to tell a story, quite the opposite in fact.  Hughes is slated to start up an All Star Wonder Woman series for DC Comics.  The All Star books are never on time; All Star Wonder Woman will probably be no different, Adam’s work is highly sought after and as a result he’s a very busy guy.  Adam’s other claim to fame is his series of YouTube videos, “Just how hard is it to get an Adam Hughes sketch?”.  Speaking from experience, his line at conventions is never short, but his sketches are worth it.  Be prepared for a wait.

Check out Adam’s site for samples of his work.

Red 5 is a Canadian comic book company quickly making a name for themselves in the industry.  Their flagship book Atomic Robo, was co-created by Scott Wegener.  For those of you who have not checked Atomic Robo out, do it!  It’s a fantastic book that pays homage to the likes of The Rocketeer, Indiana Jones and many other titles. Scott has also done work for Marvel Comics, including work on the Punisher: War Journal and most recently  Marvel’s 70th Anniversary Human Torch one-shot. Like the previously mentioned Adam Hughes, Scott’s sketches are fantastic and certainly worth the growing lines.  Be sure to check out the Atomic Robo Official Site.

Check out his art at Scott’s Official Site, and make sure you keep an eye out for Wegener in the future. 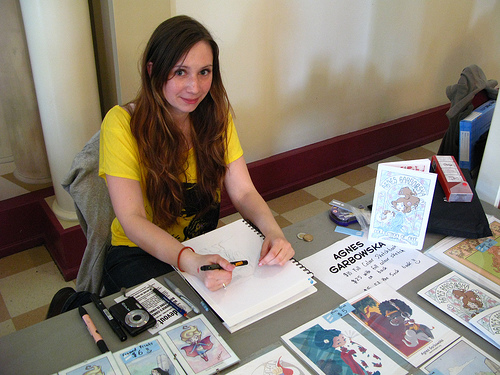 Toronto’s own Agnes Garbowska has an incredible talent for taking even the most serious and mature content, and making it accessible for everyone without taking the edge off the original material.  The fact that Agnes is not currently working for either Marvel or DC is astounding.

Her blog shows samples of her creator owned project with a genius premise, I won’t spoil it here but when you see the art you’ll understand the possibilities.  Her blog features an incredible gallery of her work, and she also does commission pieces.  If you have the chance to get a sketch from her don’t pass it up, her work is amazing.  Agnes will sketch you some awesome “What If…” pieces.  Check out her blog, and if you like what you see spread the word.

Here’s a sampling of Hughes, Wegener and Garbowska’s work.

That’s all for this week folks, come back soon for profiles of more talented artists. In the meanwhile, catch up on past Art-O-Bot features. If you are a local artist, please email me at [email protected] and I will be happy to feature your work on Art-O-Bot.