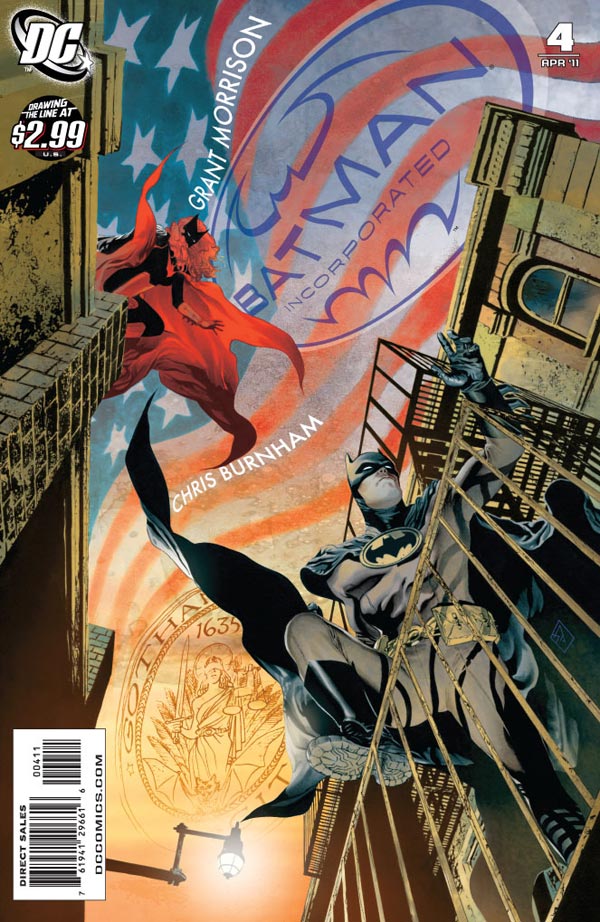 Grant Morrison’s Batman Incorporated explodes in issue #4! One of the two titles featuring the returned Bruce Wayne, I found the previous three issues to be incredibly weak. The series started with Bruce Wayne revealing that he had been secretly funding Batman over the years, and that now, there was to be an organization of Batmen protecting the world. Subsequently, we witnessed some pretty ridiculous storylines featuring Bruce searching the globe for those worthy of wearing the cowl.

Thankfully that all changes with issue #4. Switching between Batman fighting for survival in the present, and the ‘true’ back story of the original Batwoman – Katherine Kane – this issue reminds one just how talented Morrison is. Between the fantastic reinvention of Batwoman’s past, and new artist Chris Burnham’s stunning artwork, issue #4 bears almost no resemblance to the three previous ones.

This comic is truly Grant Morrison’s love letter to all the 1950’s Bat-wackiness that he is known to enjoy. From a Robin who spends his time lamenting Kane’s relationship with Wayne, to the page featuring Ace, the Bat-Hound, this issue both honours and pokes fun at the strange Batman of fifty years ago. And in the present, Bruce finds himself in yet another death-trap, being forced to fight Gaucho, the potential Argentinean Batman. In this case, it is not the trap itself, but rather, the revelation that Gaucho was involved in Batwoman’s disappearance, that creates the tension and drama in the story. If all of this sounds bizarre and labyrinthine, it certainly is! But this is also Grant Morrison at his best!

Chris Burnham’s art moves perfectly from a sinister J.H. Williams III style for the present events, to an exaggerated Karl Kerschl-esque effect for the flashbacks (his faces are too fantastic), and Batman Incorporated #4 is worth reading for his art alone. Where the past issues of this series were too campy – the entire premise feeling too much like a DC marketing campaign – issue #4 has me eagerly awaiting next month’s installment.