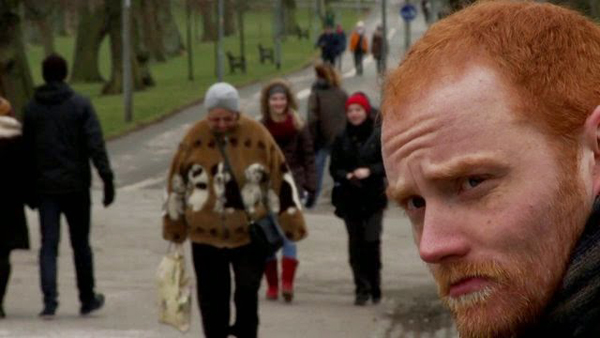 Scott P. Harris’ look at his personal identity via the colour of his hair in Being Ginger isn’t successful in the way that he probably initially hoped it would be, but what he lucks into once the film finds its footing is far more intriguing and thoughtful. Ostensibly a documentary that was conceived as a university thesis project about how he can’t find a date, it actually takes an admittedly self-serving concept and turns it into a moving and surprisingly nuanced look at bullying and its effect on self esteem.

An American ex-pat living in Edinburgh, Scotland for university, Scott is a ginger with short receding bright red hair and a neatly trimmed beard to match. He certainly isn’t an ugly man, and yet he can’t seem to find anyone willing to date him while similarly redheaded women seems to be something more exotic and desirable than their male counterparts. His initial idea: to hang around parks and try to find out what women on the street think of ginger men.

So really, the films starts with what was supposed to be only a five minute or so bit, and the parts where Scott tries to corner people to get their opinions and possibly boost his own ego are a little superficial. Aside from a scene where Scott botches filming a first date with a blonde woman who has shown a general interest holds some great dramatic tension and sympathy for the guy, but for the most part it becomes apparent that Scott’s the one who has higher standards than the women who seemingly want nothing to do with him. To his credit, Scott realizes his own personality issues and deals with them in a sometimes brutally realistic confessional style. He’s a man trying to deny his own ego and to some degree that’s fascinating, if a bit longwinded.

The real thrust of the movie comes about half an hour in when an experiment where Scott wears a sign to the park to show off his low self esteem gets him some really messed up reactions. It’s not that he’s being derided for taking the piss out of himself, but one douchebro honestly tells him that he needs to shave off all his body hair and dye whatever else he has growing out of his body, and most memorably another woman goes on the kind of backhandedly racist tirade that one would think could never exist against someone as innocuous as a redheaded white guy, but it’s something that needs to be seen and heard to be believed.

No, Harris doesn’t use this as an occasion to talk about any kind of blown up and non-existent persecution complex against all redheads, but he goes back further into his own past and to a film that he couldn’t bring himself to make. He looks back on footage of the real reason why he’s the way he is: schoolyard bullying. Instead of staying the course and looking for dates, Scott starts looking into why he would even make his film in the first place.

That’s powerful and deep stuff, and while the dating aspect of the film never goes away (there is an hilarious bit with a shady “Gingers Only” dating site) it becomes a lot more informed by Scott’s eventual introspection and acceptance of a larger issue that he wanted to deny more than his ego. It’s a little all over the place in terms of construction and it feels every bit like a first feature that was blown up from something a lot smaller, but Harris does deserve a lot of credit for being able to take himself to a darker place to tell a story that many people don’t like to relive.