Editor’s note: This review first ran as part of our TIFF 2020 coverage.

Concrete Cowboy begins with a moment I call the reverse Fresh Prince. When 15-year-old Cole (Caleb McLaughlin) gets expelled from school, his frustrated mom (Liz Priestley) ships him off to Philadelphia to live with his estranged father, Harp (Idris Elba). The reunion doesn’t go well.

In Cole’s eyes, Harp is more concerned with the Fletcher Street Stables down the block from his ramshackle home. You see, Harp is part of an urban cowboy culture. His tight-knit circle of concrete cowboys spends their days training horses and maintaining stables, and their nights sitting around a campfire fire reminiscing about better days. Harp is so committed to the cause he even stables a horse in his tiny living room.

Nothing about this community makes sense to a city kid like Cole, so he hangs out with his childhood friend Smush (Jharrel Jerome). Smush is a street-hardened drug dealer looking to make some quick cash to leave Philly, and he recruits Cole as his partner in crime. But both of this youngster’s lifestyles can’t co-exist. Cole must choose between making fast money with Smush or mending his relationship with Harp.

Director (and co-writer) Ricky Staub delivers one of the year’s most unique films. At its core, Concrete Cowboy relies on a standard coming-of-age movie template (much like A Bronx Tale). This heart-warming tale is predictable right from the opening jump. You get a sense of who each character is and where their emotional journey will take them. What sets this movie apart is the rich and vivid way in which Staub executes his vision.

Aided by Minka Farthing-Kohl’s dazzling cinematography, Staub creates an intriguing slice of life that I was happy to get lost in. West-Philly’s concrete cowboys make such compelling characters that they more than makeup for moments of narrative inertia. I was pleased to mosey along with Harp and his crew as they sipped beers and swapped tall tales.

The film looks stunning. Bright lights often blaze across the frame in sleek flares as Cole’s world flutters with new possibilities. Much of the warm, saturated, dream-like imagery left me feeling nostalgic for the summers of my childhood. You can almost feel the humid summer air spill over your skin as Harp and the gang wrangle horses under the waning magic-hour sun. Farthing-Kohl even photographs the run-down stables with a sense of wistful majesty. It’s all quite striking. So it’s an added bonus that Elba, decked out in neckerchief, tan gloves, and denim, has never looked sexier.

Idle minds are the devil’s playground, and Concrete Cowboy speaks to the power (and necessity) of having a passion. I wouldn’t call this story well-written, but it still gets its message across. You always understand why street life tempts Cole. There’s a void in his life that he doesn’t know how to fill, and his friendship with Smush is the easy fix. It’s instant gratification in the form of money, nice clothes, and camaraderie.

Harp works Cole to death, forcing him to shovel crap in the stables. Even then, there is no guarantee they’ll fix their strained relationship. But through that hard work, Cole begins to develop a passion for urban cowboy culture. Many of the concrete cowboys in Harp’s crew were once troubled kids like Cole. The reason they’re not dead or in jail today is that they found positive ways to focus their time and energy.

A story about a Detroit kid bonding with his dad as he falls in love with inner-city cowboy culture sounds like the stuff of fiction. And what’s remarkable about this film is that it’s based on real-life. Not only is the Fletcher Street Stables an actual place, but several members of Harp’s posse are the real-life concrete cowboys that inspired the story. 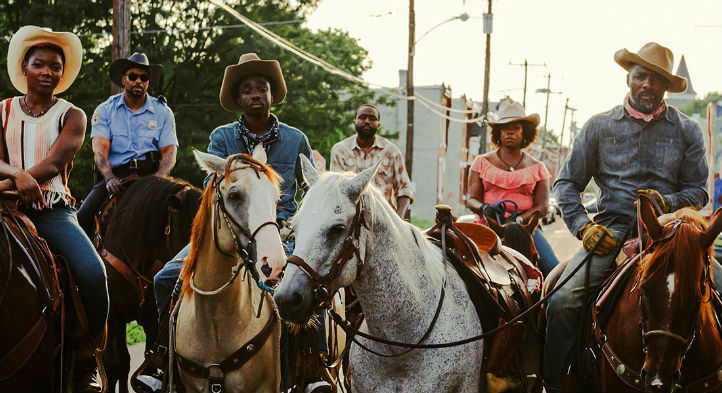 As much as I enjoyed this movie, it does at times get sloppy. A few critical storytelling threads need more fleshing out. And some strange editing choices make me think Staub left key scenes on the cutting room floor. Even though the script doesn’t produce the deepest group of characters, the cast’s charismatic performances kept me invested in the plot.

I mentioned this in my Under the Open Sky review last week, so excuse me for double-dipping on this point. I must say that thematically, Concrete Cowboy is a western in the truest sense. Westerns conjure images of men sauntering into raucous saloons, train robberies, and shootouts at high noon. But the theme at the heart of most westerns deals with people confronting the end of the new frontier. Westerns tell stories about modern society overtaking the old way of life.

Staub and co-writer Dan Walser use gentrification as the inevitable force coming to wipe out Harp and his crew. More so than horses and cowboy hats, it’s this theme that places the film squarely in the western genre. But Staub and Walser’s use of gentrification feels haphazard. A foreboding sense of encroaching outsiders lingers over the entire movie, but narratively this concept idles on the backburner while the plot focuses on Cole. I get what this movie is trying to say about race and class, but it does a lousy job making its point. Again, I’m down for an extended cut of the film that explores these core themes in greater detail.

If it seems like I’m being tough on Concrete Cowboy, it’s because of how much I enjoyed it, despite its flaws. Ultimately, I have to judge this movie for what it is and not what it could have been. Despite Concrete Cowboy’s uneven storytelling, it’s still worth saddling up with this sentimental urban odyssey.