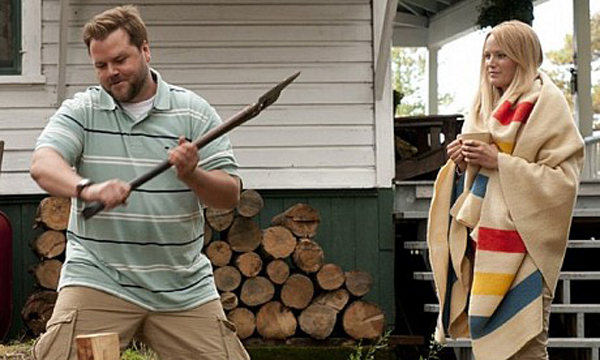 Crafting a black comedy is no easy task. It requires a certain finesse, marrying the absurd with the dark, and mixing the two together with an earnestness to ground it all. Put it all together just right and you’ll end up with something truly special. Get the balance even a tad wrong and the whole thing is likely to fall apart. The latter is the case with Cottage Country, a new Canadian film about a couple and the murders they commit to keep their blissful lives afloat. The pieces are all there: a beautiful locale, actors who can pull off great comedy, and a story with loads of potential on paper. Unfortunately, it never gels the way it should.

Todd (Tyler Labine) and Cammie (Malin Akerman) are a young couple madly in love. Todd plans to propose to Cammie on their trip up to his family cottage. His plan goes awry when his good-for-nothing brother, Salinger (Dan Petronijevic), shows up. Salinger and his girlfriend, Masha (Lucy Punch), are too much of a burden, with one incident leading to another, when finally Todd loses his cool and murders his brother with an axe.

In a sharp twist, Cammie sympathizes with Todd, even helping him plan to kill Masha and get past the whole thing. But their plan hits a huge snag when Salinger’s friends descend on the cottage for a huge party. Enter: Dov (Benjamin Ayres), the inquisitive young rabbi who almost immediately begins putting things together. More killings happen. Then attempts to hide the evidence. Hilarity ensues. Or at least, it would, if the film had the right grasp of its tone. It’s especially bad given it sets the wrong tone so close to the start, when the film should ideally be setting everything up as smoothly as possible.

Director Peter Wellington, working from a script by Jeremy Boxen, never quite nails the tone, and for that reason the film never manages to take off. While much of the film is theoretically funny and absurd, scenes of earnest love between the lead couple are too flat, and moments of violence and gore are overkill rather than hilarious punctuation. The production quality of the film is quite strong, but Wellington’s assuredness doesn’t extent to the elements necessary in selling the extremely dark comedy at play in the script.

There’s some disappointment, too, in what the actors deliver, or in many cases, the material they’re given. Labine, who was such a great presence on the TV series Reaper, carries the film admirably, but is too often the straight man. Akerman, who has proven herself a comedic talent in several films, is expectedly great playing a crazy person, but too much air in the editing means much of the actual comedy fails to land. The saddest thing about the film is the complete misfire of a performance from Lucy Puch. She’s easily one of the better comic actresses around, but here, even in a small role, her characterization is so baffling and annoying that it brings the film down a few notches.

Cottage Country might have done better by trusting itself to go further into the realms of absurdity. By edging to into more grounded territory and attempting too often to be something of a sweet comedy, its darkness comes off as abrasive instead of funny. While not as outright bad as many similarly pitched English-Canadian films, Cottage Country is in a way familiarly defanged. There’s plenty of gore, and the film certainly goes to some extreme places, but it lacks the conviction necessary to work as the few great black comedies do.