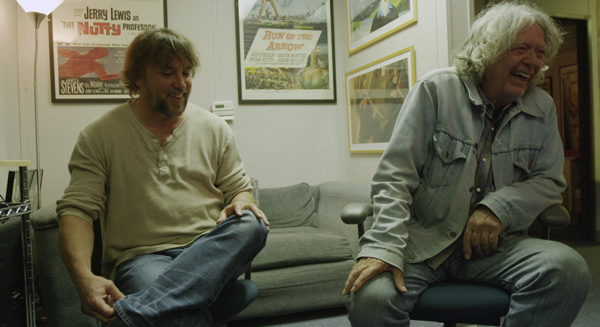 Double Play: James Benning and Richard Linklater (screening tonight for free at the TIFF Bell Lightbox as part of the Free Screen series) is a documentary by a film nerd, about film nerds, for film nerds. That being said, it’s less about film culture and more about how it’s brought two very different filmmakers together.

In 1985, Richard Linklater began the Austin Film Society, which continues to show classic art-house and experimental films to the city’s many cinephiles. Experimental filmmaker James Benning was their first out-of-town invitee (he was based in New York at the time), thus beginning a friendship that’s now almost three decades old.

The film primarily takes place over the course of a few days in Austin and Bastrop, Texas, while the two filmmakers presented Benning’s films at the Austin Film Society. While it is mostly about their relationship, it does also examine their careers, but not in a way that suggests there’s a comparison to be made. Benning’s recent films are short, contemplative, and often one static shot (his older ones are a little more frenetic), whereas Linklater has had a very successful career making mainstream yet often non-traditional narrative films. (Two of which from Benning, Chicago Loop and American Dreams (lost and found) screened last night.)

Despite obvious differences in their work, background and ages, they are very similar dudes. They were both obsessed with baseball in their youth and still enjoy playing, but the pastime isn’t as big a part of the film as the title and trailer suggest. The most significant thing they have in common is an unassuming approach to life that is both intellectual and artistic.

This is the first film from Gabe Klinger, primarily a film journalist. Much of the film plays out like a love letter to these two filmmakers’ careers, with a little more weight given to Linklater’s. He includes a montage linking a lot of the reoccurring themes and images from Linklater’s filmography, which is neat but doesn’t really fit in with the rest of the documentary, playing more like a fan video one would upload to YouTube.

Fortunately for the filmmakers, the timing of this film’s release couldn’t be better. With all the buzz and fanfare around Boyhood,  it looks like Linklater is likely going to get his first Oscar nomination for directing. We even get a brief glimpse of the work in progress as he shows scenes to Benning and talks about how the yearly transitions have evolved.

Double Play is a very ‘nice’ film. There is no conflict, just a couple laid back fellas playing catch and talking about movies. Both seem like very affable guys, kind of new generation of “good ol’ boys” that enjoy talking about philosophy and their feelings. The final product is probably one of the better films to come out of Kickstarter campaign.

Next Article »
Doctor Who Episode 8.1 Recap