Hello readers! Welcome to another instalment of Douche Ranking Game of Thrones, the feature where we at Dork Shelf measure an episode’s players on a very scientific douche-awesome spectrum. After harrowing trial-and-error experiments (our TV writers can never blink again and we can’t tell you why), we’ve developed a very precise scale wherein douchiness is measured in Joffreys, and awesomeness is measured the most glorious creature in the fantasy genre: dragons.

If you thought I was going to say “unicorn” in that last sentence, I’m going to need you to take a long hard look in the mirror.

Are Gilly and little baby Sam that much safer sleeping in the brothel’s filthy haystack than they would have been chilling out at Castle Black plucking goose feathers? Debatable. I mean sure, some Night’s Watch men are scum, but a good chunk of them are likely decent dudes like Jon Snow who don’t just go about sticking their penis in non-consenting women. Let’s face it: Sam didn’t want Gilly around other guys, and he thought that sending her away would be cleanlier than just peeing on her to claim her as his (they likely don’t bathe that often, so I kind of get it).

Let me throw on my feminist hat for a moment (us feminists decided on the colour blue just to spite men), and state the obvious: women should have agency and “protecting” them in this way takes that away from them. Gilly is a grown ass woman, not a dainty princess. She’s had a child, has had to protect herself and her sisters from her disgusting rape dad, and she probably has more moustache hairs than Sam if you look close enough. Sam had no right to force her to leave Castle Black if she didn’t want to. Ergo, heretofore, Sam is a dick. 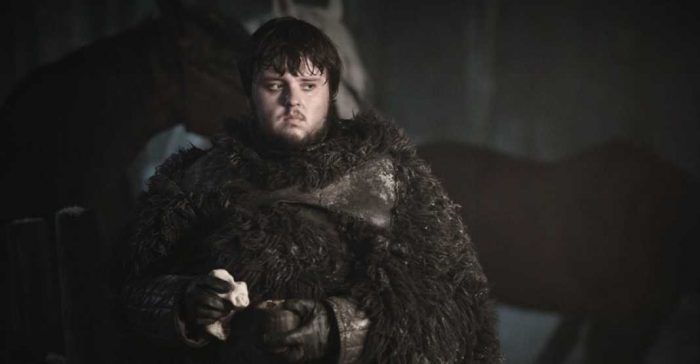 Douche rating: 7 Joffreys who took a Women’s Studies course in order to get laid, but then learned a lesson in respecting women instead.

This is how I imagine the production meeting went for this episode:

“Ummm… everyone, gather round… Now, we have a big problem. We really fucked up last season by giving Jaime a believable story arc and allowing him to feel emotional vulnerability. We feel like he got way too cool too fast and way too many people like him. Literally hundreds of thousands of people love him and he’s become a beloved character so we need to make him more of an anti-hero. Like… Walter White but with a worse haircut. Let’s… ooh yes… let’s make him do something that doesn’t make any goddamn sense in the context of the show. Hmm… and let’s make commit an abhorrent act of sexual violence even though there are literally thousands of other ways we could complicate his character… AND let’s make sure to also unnecessarily and irreparably affect a complex female character’s own narrative just to advance the guy’s storyline! Yes… and OOH… OOOOOOOH… let’s make sure that act is basically a hackneyed plot device borrowed from a shitty Zack Snyder movie! YES! YESSSS! It’s all coming together!!!”

This was my experience watching the scene wherein Jaime rapes Cersei:

Stage 1, Confusion: “Oh okay so they’re trying to get intimate… the woman Jaime has only been shown loving and respecting doesn’t seem to want to be intimate. I get it. It’s a weird scenario, with Joffrey laying there emanating his douchey vibes… Jaime (a man who saved a woman from getting raped just last season) will just waltz his handless ass out of there… byeeeee Jaimeeeee… Wait… what’s he…”

Stage 3, Denial: “I can’t believe this is happening. They would never pull a stunt this mornic.”

Stage 4, Rage: “THIS IS ACTUALLY HAPPENING? WHAT IN THE ACTUAL FUCK.”

So um… Yeah. That fucking blew. As writers such as AV Club’s Sonia Saraiya and Pajiba’s Cindy Davis eloquently pointed out, this scene was incredibly problematic and no, not just because it had rape in it. Used thoughtfully and sensitively, horrific acts can effectively drive a story and offer us insight into the minds of victims and perpetrators alike.

This scene, however, was a steaming pile of garbage. Using rape as a go-to shock tactic like it’s not an act that will have grave, lasting effects on both characters is short-sighted, exploitative, and offensively lazy. After three seasons of complex storytelling I expect better from Game of Thrones.

Douche rating: 68,000 depressed Joffreys rocking back and forth while whispering to themselves “why would they do this to Cersei and Jaime… WHY?!?!?”

3) The dude from Meereen

Not content with enough women being disrespected this episode, this douchebag showed up at the end and decided to whip his dick out and pee in front of Dany. Wow. Cool. How classy and original. Thank you for literally turning this into a pissing match. Thankfully for him, Dany did not yell “Dracarys!!” in order to immediately dispense him.

Douche rating: 40 Joffreys whipping their dick out while yelling, “Look everyone! I have one of these as well!”

If you’ve read my season 3 Game of Thrones refresher, you should be well aware that I think Littlefinger is a scummy bastard. But… as much as I hate him I have to give credit where credit is due. Let’s review all the cool shit Littlefinger managed to pull off this episode, shall we?

i) HE HELPED KILL JOFFREY YOU GUYS!

ii) He got back at the Lannisters for sending him off to The Vale instead of giving him The North.

iii) He orchestrated a brilliant capture of Sansa, which means that in the future he might nab both The Vale and The North.

iv) He now has the opportunity to romance a younger version of Catelyn, aka the woman he loved but who never loved him back (Littlefinger is the original “nice friendzoned guy”).

So basically this episode can be summarized thusly:

Dragon score: A dragon that poops on sheep from above because even though he’s a dragon, he’s still pretty much an asshole.

Between this brothel full frontal dong and the Meereen douchebag dong, it was like dong city up in this episode. Dong da-dong dong DONG (to the tune of “Thong Song” by the artist Sisqo). Ding DONG… the “only bewbs” rule is dead everyone. Houston… we have dong.  Dong… Okay guys, how long were you going to let me go on with that?

Anyway. We got some full frontal peen (from someone who isn’t Hodor) and that was lovely. Game of Thrones’ viewers had been clamouring for more genital equality for ages, and it’s nice that HBO is finally listening!

By the end of this season I expect Jon Snow to be fully naked. He wants to be naked. Why would you get in the way of his (and OUR) happiness, HBO? WHY?

Seriously, how is Davos still alive, guys? Not only did he try to assassinate Scarlett Witch Crazy Bitch, but he let Gendry go, and he keeps questioning Stannis’ choices. The balls on this guy must be so big that they’re secretly being carried in a wheelbarrow behind him in each scene, and the blocking is just obscuring it.

Dany was flaw free this episode. Not only did she create an army full of people who adore her and would risk their lives for her, but she pulled off a brilliant military move. Instead of breaking into Meereen and stomping all over everything like an ogre, peeing on everything to claim it as hers, she gave the slaves of Meereen symbolic “gifts” to use against their masters: the very collars that bound the dead bodies marking the road to the city (as well as the collars from thousands of other slaves she has freed – ed.). How powerful is that? Dany may be young, but she’s every bit as cunning as her male counterparts.

Dragon score: 17,000 dragon-wearing sunglasses and telling you to fucking deal with it.

Man, how many times will Tyrion need to send his loved ones away like that little kid had to do in Air Bud? Kudos to him for putting the safety of his friends and lovers above his own life. He is still the best and I love him and please don’t let him die George R.R. Martin, because after that bullshit Jaime and Cersei scene, we really need this.

Dragon score: 28 self-sacrificing dragons that say that you’re stupid (but that actually think you’re the love of their lives).

That’s it for another edition of Douche Ranking Game of Thrones everyone! See you back here next week for more side eyes, more plotting, and more Joffrey!