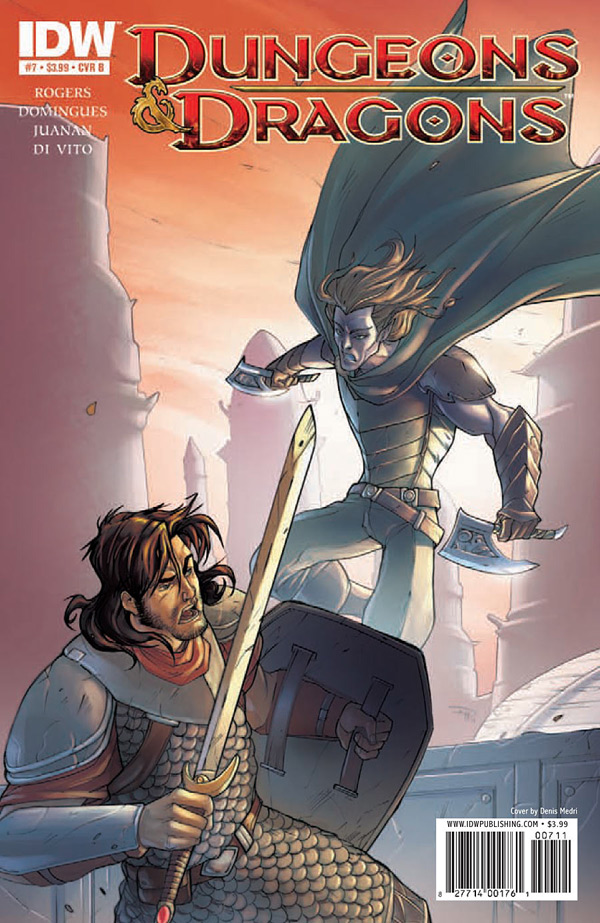 Everyone in the comic book industry is looking at Image Comics. Between its strong run of hot hits and bold exclamations of a new “Big Three” of comics publishers, they have positioned themselves well — but if we consider the whole spectrum of comics, it must be said that rival publisher IDW has established just as exciting a line up of fantastic comics. Focusing on licenses, and “re-developing” stagnating properties, IDW has had some major success with GI Joe, Transformers, and less-mainstream-but-even-hotter Suicide Girls comic. None of these series come close to matching the fun and excitement that IDW has returned to… Dungeons & Dragons.

Yup, break out your four, twelve, and twenty-sided dice, and pick up their on-going series that features the best RPG-comic story that I have ever seen. This comic utilizes to all the usual stereotypes that even non-D&D players will already pick up on as fantasy-geek-chic rolls through mainstream culture. Then the comic takes these stereotypes (and reader expectations) and inverts them just enough that you find yourself laughing both at the story, and at yourself for being suckered in so easily. It’s like the joke is on you for believing in stereotypes, and yet, by having believed in those stereotypes, the story is that much funnier and nuanced. I’d say I’m reading too much into this fun sword-and-sorcery adventure comic, but I really don’t think so.

Dungeons & Dragons is perfect for new readers who pick it up randomwly, but even more satisfying for those who have know and enjoyed the D&D game for years. The only drawback to this comic is that it is heavily tied into the 4th edition of the role-playing game. For newer fans of the game system, the extra notes at the back, designed to help you recreate or reuse elements from each issue, are probably a lot of fun. I certainly wish there had been a book like this for me 15 years ago. Still, for more ‘experienced’ fans like myself, who like most older folks, keep claiming that “It’s only best when it’s XX edition” (personally I’m still pretty happy with 3.5), this material serves to remind us how much D&D is being directed at the vid-gamer crowd these days.

Still, when the only major complaint about a comic is the bonus material (and how it makes me feel old), the series is doing something right. Written by John Rogers, with art by Horacio Domingues, JUANAN, and Andrea Di Vito; Issue #7 might not be the best jumping in point. Middle of adventure, the characters flashbacking/time travelling through the story, and alliances shifting from moment to moment, the issue might be a little tough to open and dive right in. Then again, if you liked the wildness and the “who knows what could happen next” aspect of role-playing games, then this might be exactly the perfect issue to pick up and discover the new Dungeons & Dragons series.