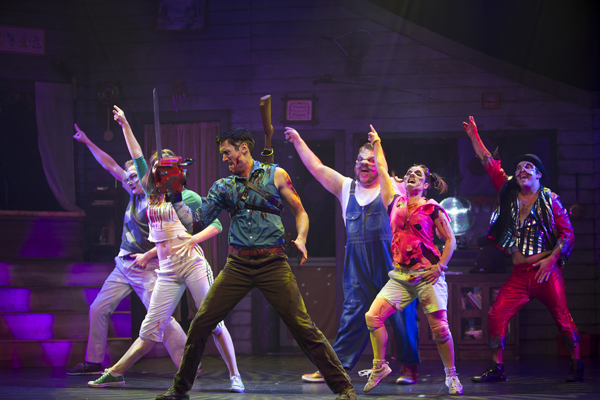 A sensation since it debuted in Toronto at the Tranzac back in 2003 and a megahit when it ran for over 300 shows at the sadly shuttered Diesel Playhouse starting back in 2007, Evil Dead: The Musical returns to local stages for what already looks to be a successful run (opening this past Tuesday officially and currently extended to December 22nd) at its new home. While the deliciously gothic looking Randolph Theatre on Bathurst Street (formerly the Bathurst Street Theatre) makes for a perfect aesthetic home for the show, there are still a few minor growing pains for the venue to overcome when dealing with a show this ambitious. But what really matters is the show, and it’s as solidly entertaining as it ever was.

Acting as a kind of madcap mash-up of the plots and catchphrases of all three beloved films from Sam Raimi, returning original director Christopher Boyd’s all killer, no filler revue tells the story of our hero Ash (returning original leading man Ryan Ward) and his friends’ ill fated trip to a cabin in the woods. The first act mostly follows the first film-slash-the first part of Evil Dead 2: Dead By Dawn with considerably more laughs and 100% more songs than the films had. Ash has to deal with the uncovering of the Necronomicon and the unleashing of demonic forces that possess his sister (Alison Smith) and girlfriend (Margaret Thompson) and want him and his horndog best buddy (Rodrigo Fernandez-Stoll) dead. The woods won’t let them leave and the bridge is out, forcing Ash into a fight for his life. It’s a fight that gets tougher when a young woman (Laura Tremblay) whose father owned the cabin comes bearing the final pages of the Necronomicon to complete her deceased pappy’s work and send the Deadites back to where they came from.

The best part of George Reinblatt’s original show was how through the medium of a staged musical, the show offered up a unique critique not only to fans of the original film, but to fans of the theatrical artform, as well. There’s still that largely anarchic and deliciously un-PC sentiment that runs through Bond’s current restaging. A few updated pop-culture references go over somewhat disastrously at times (but they’re sold well by Smith, who has to deliver the bulk of them when she has to go full on evil), but there are still far more hits than misses.

The cast matches the show’s manic intensity and silliness nicely, and despite a couple of opening night jitters that all shows iron out themselves over time, there’s a lot to like in Bond’s company. Next to big screen leading man Bruce Campbell, no one else seems to be able to capture the evolution as Ash from frightened goody-two-shoes to chainsaw and rifle brandishing badass quite like Ward. Everyone around him seems to be having a great time, as well, and that’s a necessary component when it comes to material this purposefully silly. A special notice has to be given to Daniel Williston in the role of Jake, a local who appears in the second act as a guide to Tremblay’s character. He simply slays as the put upon know-it-all, and lends a decidedly large amount of vocal chops to a character that’s already serving as the biggest comedic relief in something already meant to be funny. He’s absolutely delightful.

The cast also throws themselves at the singing and dancing with great aplomb, especially during the climactic “Do the Necronomicon” number, which has probably never been that tightly choreographed before. It’s also worth noting that despite a shaky start with regard to sound design and being able to hear the actors from the balcony during the first part of the first act, the issue seemed to resolve itself as it went along.

While the rough edges in the production itself will undoubtedly be sanded down with future performances, the biggest adjustment to the show has to be the move to a smaller, more cramped stage than the one that the show once occupied at the Diesel. There isn’t as much room for people to move around, which leads to a sometimes strange lack of depth to the stage itself, but that will only be noticeable to people who have seen the show before. The visual effects are still spot on and inventive. Anyone going for the first time won’t be able to tell the difference, and the level of fun is just the same. Aside from that, and this might be a nitpicky point, but getting to the balcony is a bit of a chore since you have to go by both a downstairs bar and an upstairs bar to get there, the lower of which was so busy it took several minutes just to approach the stairs and get around the lines. Thanks to the narrow hallway layout, this problem seems unavoidable, so anyone in the balcony would best be advised to get there early to make it to their seats (actually rows of pews, which aren’t the most comfortable, but the show is short and there’s a kind of awesome novelty value to seeing such a production from up there).

And yes, the famed splatter zone in the first few rows makes a return for those wishing to truly live the blood drenched climax of the show. It might be bloodier than ever and for those willing to shell out some extra cash to get a little messy, it looks totally worth it. The crowd in the front, and all the way to the back seemed to have a great time, and in the end, that’s all Evil Dead: The Musical needs to be in the first place.