Fed Up Review - That Shelf Skip to main content 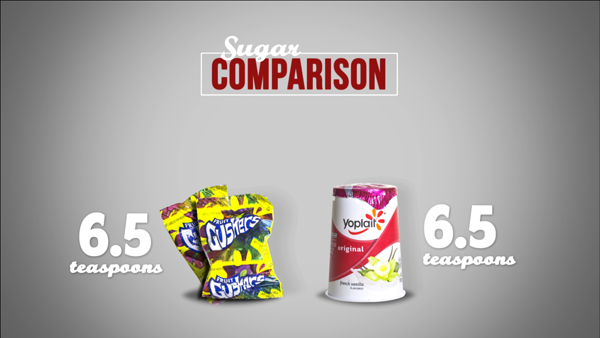 There are few things worse about my job than watching an advocacy documentary that I agree with on almost every single point that still manages to be a terrible and potentially dangerous film. The anti-sugar screed Fed Up is one of those films in every possible way. Repetitive, reactionary, and essentially 90 minutes of histrionic shouting it says nothing that hasn’t been said before and yet does so in such a way that they might be damaging their own arguments by not showing the larger issue. It instead fixates on one (admittedly large) part of a massive problem before giving ludicrously privileged and ill thought out ways of handling it. It’s so sickening it made me want to eat a bag of sugar and suck down an entire carton of cigarettes to wash it down with as soon as it ended out of spite towards everyone involved. So please just know that I’m not attacking the message, per say, but how it’s being presented in a counterintuitive manner.

Fed Up is a bit of a collaboration between filmmaker Stephanie Soechtig (director of Tapped and a consulting producer on the almost equally horrendous GMO OMG), An Inconvenient Truth producer Laura David, evening news anchor Katie Couric, Chapters/Indigo baron Heather Reisman, and a slew of other producers designed to make viewers cognizant of the fact that sugar is secretly available in almost everything we eat regardless of low calorie and fat counts. Essentially the overarching point of the film is to illustrate the devastating effects sugar can have on the public health leading up to asking people to cut sugar from their diets and even going as far as suggesting that all products containing sugar be labelled as potentially carcinogenic and dangerous in the same fashion that cigarettes and alcohol are.

I’m all for that. I really am. The amount of sugar that we ingest on a daily basis – most of it unconsciously – is frightening and staggering. Should it be labelled clearly instead of hiding behind any one of dozens of coded words in an ingredient list? Absolutely, but maybe not necessarily in the extremes the film is suggesting. The rise in previously nonexistent Type 2 diabetes in young people (undoubtedly linked to fast food companies and soda pushers infiltrating cash strapped school lunch programs) and shady doctors who see their research funded by Coca-Cola are chilling to behold. There are things in Fed Up that people desperately need to know and understand, especially that living clean does not mean simply going out and exercising and that one needs to eat smart to stay healthy.

But for everything it gets right, Fed Up delivers its message in such a shrill, harsh tone that it keeps losing its thesis amid all the finger pointing and shouting. It feels like it has been made by Chicken Little trying to escape from The Towering Inferno. Everything is terrible and we only have ourselves to blame. It belittles and nitpicks the audience into thinking they’re a bunch of ignorant boobs who need to be brought down to size as swiftly and harshly as possible. Everything is evil and we in turn are evil for consuming it all so blindly. Interviews with kids and teens dealing with obesity are so exploitative and inadvertently fat shaming that everyone involved with the production should be ashamed of themselves. Potentially interesting side quests to talk about other food borne ills (like the potential evils of cheese and Michelle Obama, the film’s biggest and most unlikely villain, being in the pocket of the processed food lobby) are thrown by the wayside almost as abruptly as they are brought up to simply start yelling at the audience about sugar again.

This isn’t some sort of new style of polemicist rhetoric. Michael Moore famously made his career of this style of film, and the hiring of Couric as the film’s narrator and chief interviewer suggests that the film wants to be nothing more than an evening news expose to rip the lid off of corporate malfeasance (she does have one great moment of making a food lobbyist squirm, though). The main problem is that Fed Up preaches to positively no one who should be actually watching and learning from the film, and instead expends all of its misplaced energy chastising a branch of the proletariat that should already know better. The worst part of that is that Fed Up willfully and ignorantly ignores bigger problems for a privileged answer to the problems being raised.

Only in two lines of dialogue is it even mentioned that obesity, heart disease, and other health problems associated with sugar are often affecting those with the lowest incomes: the people who should be hearing this message. It is a sad fact that around the world, especially in North America, people live in places known as “food deserts,” or places where the poverty level is so high and demand for pricier and healthier foods and vegetables are so low that they often aren’t affordable or even available because skittish retailers don’t want to pay for fresh food out of fear of waste. It’s mentioned in passing like this isn’t a big deal, and yet the kids being profiled clearly live in a culture where this exists. It’s a willful and wholly insidious skewing of the facts to further sensationalize their point.

In the world of Fed Up, the privileged and rich should do everything in their power to fix their lives, but those poor people are pretty much on their own. By the time the films stops shouting at you over and over again with the same arguments that sugar (and positively no other genetic modifications to our food) is terrible, it half heartedly tells the audience to just cut sugar out of their diets. Now that is a really awesome sentiment for people pulling down a fair amount of money every week, but wholly unrealistic to the people who need the most help in changing their diets. It’s purely arrogant and shameful to not acknowledge that there’s a larger problem to the painfully real problem of starvation in America. Again, I agree, but this method of making the message known depresses the ever loving shit out of me.

Instead, I implore each and every person who seriously wants to know more about this issue to skip this unrelenting and abased garbage and instead see the wonderful documentary A Place at the Table. It played at Hot Docs a few years ago and is readily available on Netflix. That is a film that brilliantly illustrates the problems facing our dietary needs that does so without forgetting that not everyone is a one percenter. That film never talks down to the audience, talks about sugar, food deserts, and looks for tangible solutions rather than guilting everyone into going cold turkey. That film is a comprehensive, balanced, and agreeable look on a difficult subject. Fed Up is horseshit, but at least the title perfectly encapsulates precisely what I thought of it by the time it was over. It’s not without merit, but given how abysmally it presents it message, it might have been better off just lying to people.