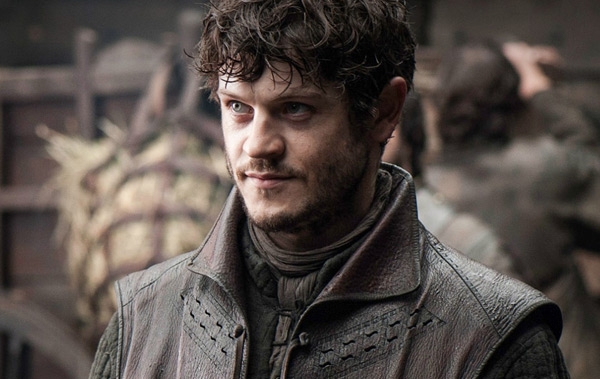 This week’s episode of Game of Thrones opens up on a woman being hunted for her beauty. This is not done in a courtly manner befitting a knight or lord of Westeros, but in the way that you would expect Ramsay Snow, bastard of House Bolton, to hunt a woman, which is to say literally with a bow and arrows.

With his loyal flayed man by his side and a giggling and jealous Myranda, Ramsay shouts, “If you make it out of the wood you win!”

It is a heavy statement to start off with and describes the test that the second episode of every season of Game of Thrones has to pass: can it somehow get through setting the final pieces of this season’s game board while providing enough forward motion that it doesn’t seem like a second, less important season premiere?

Unfortunately for Ramsay’s prey, she can’t succeed, and is torn apart by the bastard’s hounds. Thankfully for us, “The Lion and the Rose” does make it through the woods of exposition – in the first half, no less – and then celebrates by throwing us a party that no one is going to forget anytime soon (and Sigur Rós was there!)

As the hounds of Bolton rip apart the hunted woman, the castrato formerly known as Theon (now known as Reek) watches in pained horror and we are treated to a darkly comic cut to King’s Landing. Tyrion Lannister serves himself a sausage from a plate as he dines with his brother Jaime, giving a toast to his generation of the decadent House: to the dwarf, the cripple, and the mother of madness. 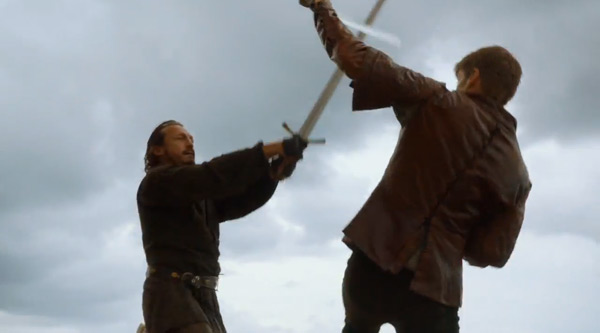 Jaime is down on himself because he, the legendary Kingslayer, can’t even slay a pigeon now that he’s forced to swing southpaw in battle. Thankfully, Tyrion knows just the guy to teach this man with the golden hand how to kill people in battle again, and Jaime is off to train with Bronn down by the seaside.

In a place of beauty and seclusion (Bronn has regular sexual encounters here with the knight Laygood’s wife here, and she’s a screamer), the two men spar. Jaime is his reluctant and proud self for a few moments, scoffing at the need to use dull blades, but he begins to appreciate the lessons he’s learning. The Kingslayer was made famous through an act of regicidal backstabbing, so when Bronn dictates that the best time to attack a man is when his guard is down, he gets it.

There are no rules in Game of Thrones and the people who play by or hide behind them usually end up dead. Jaime has never played by the rules, but his resulting shame has built up a facade of golden betterness, challenging everyone else’s lack of honour is a means of deflection for his highly public deeds of pragmatic murder.

Lord Roose Bolton returns from the Red Wedding and is welcomed by Ramsay, who was placed in charge of Dreadfort in his father’s absence.

Roose is not pleased with how the mad bastard has been running things, especially his treatment of Theon. When Ramsay presents Reek as a trained servant, Roose berates him. Theon was a valuable bargaining chip when he was whole, but mutilated and broken he is worthless. 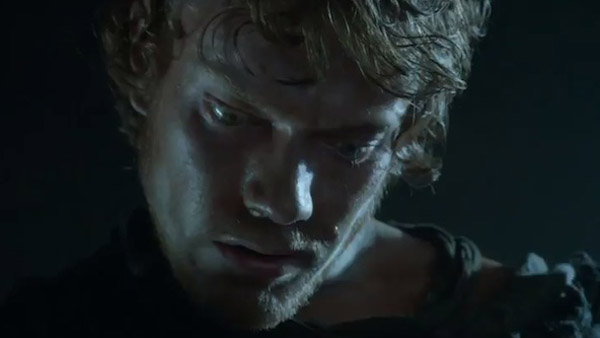 In a particularly theatrical display, Ramsay demonstrates how that’s not entirely true, forcing Reek to shave him. With the blade right on Ramsay’s throat, the dark clown bastard of Bolton causally lets his slave know that Robb Stark, who he knew as a brother, is now dead. It tests Reek, but he can’t slit the man’s throat, he just continues to give him a close shave before providing Lord Bolton with the most important information Greyjoy once held secret.

He admits that he didn’t kill the Stark boys when he burned Winterfell, but faked it using two farm children. This sparks Roose’s ambitions for the North, and since as we all know only Starks can sit in Winterfell, he declares a hunt for Bran and Rickon.

Back at King’s Landing, Joffrey is receiving wedding gifts. Tyrion – who just prior to this has been informed by the eunuch Lord Varys that Shae is in danger of Tywin’s wrath – bestows upon his nephew a book that every king should read, somehow eliciting the closest thing to warm gratitude that Joffrey is capable of.

He calls for a time of wisdom now that the war is over (which it isn’t, really), but when grandfather Tywin gifts him with the second of the Valyrian steel swords he has forged from Eddard Stark’s former greatsword, Ice, Joffrey destroys the book with the deranged glee of an inbred child king. He names the sword “Widow’s Wail.” 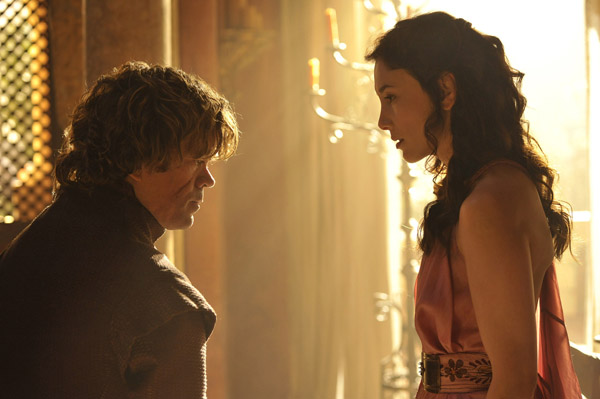 Tyrion hightails it back to his room, where he breaks up with Shae with some hard words and the promise of a luxurious life in Pentos. He breaks her heart with a fear filled: “You’re a whore. Sansa is fit to bear my children and you are not.”

The brokenhearted Lannister asks Bronn to escort her, but the warrior receives a slap and Shae walks alone to her new life across the sea.

Catching up with House Baratheon, betrayers of the Lord of Light are being burned at the stake for refusing to tear down their idols. Ser Davos, as usual, is not cool with this, but his pleas for reason fall upon Stannis’ deaf ears.

The meat is spoiled at dinner. The two women in the would be King’s life, his crazy wife Selyse and potentially evil magic advisor Melisandre, talk about various hungers that they’ve felt in their lives. Stannis forbids the beating of his daughter when his wife suggests it, and Melisandre pays a visit to the little lady in order to teach her about religion.

Melisandre tries to teach the tiny Baratheon to stop worrying and love the burning of infidels, but it doesn’t work. She goes on to ask about the girl’s spiritual beliefs, espousing that there are not seven heavens and that there is only one hell: this world. 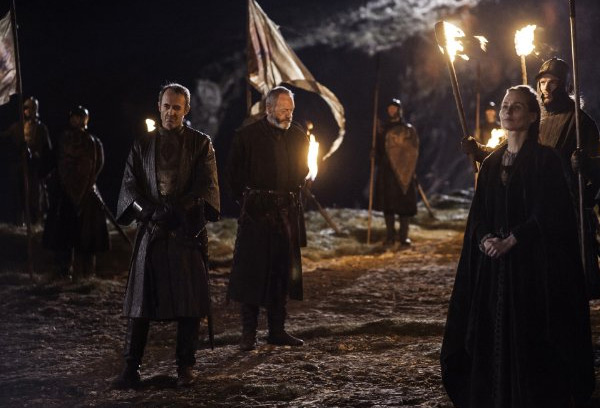 Judging by what we’ve seen throughout this series, this is probably the most accurate description of Westeros you could possibly give someone who was wondering about the big picture of Game of Thrones, a show that fuels its engine on a sadistic combination of shattered hope, mutilated bodies, humiliated heroes and ample amounts of murder. It’s still not the best bedtime story you could get after hearing your uncle burned to death, so little Shireen Baratheon will have to make due with her own literature for comfort.

Cutting to Warg-o-Vision, we finally catch up with Bran, Hodor, Jojen and Meera. Bran is eating in his warg dreams, and his companions warn him that if he spends too much time seeing the world through the eyes of the wild, he will forget who he is. This would be particularly bad, because according to the kids who can see the future, if we lose Bran, we lose everything.

The party of cool and magical children find a heart tree and it bestows Bran with a terrifying apocalyptic vision and instructions:

“Look for me beneath the tree. North.”

And so they head North.

That scene with the tree was the last of the season premiere-ish set up, successfully leading us out of the woods where we are treated to a particularly excellent party. 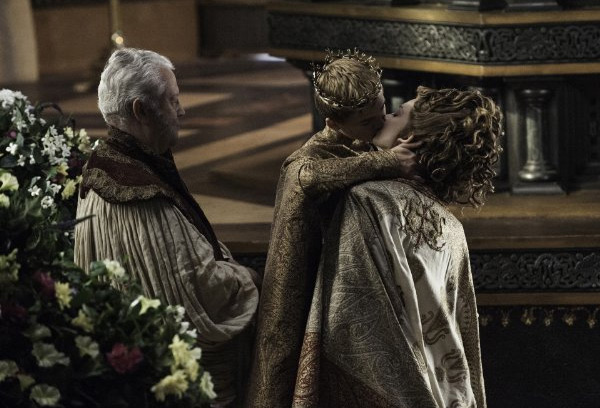 King’s Landing is bustling with the royal wedding. The lion and the rose seal their bond with a kiss, and Tyrion comforts Sansa, implying what we all know: that being a queen to Joffrey’s king is a uniquely unfortunate fate.

Afterward, Tywin and Olenna Tyrell bicker about the place of extravagance in weddings, completely unaware of the priceless entertainment they are about to witness at the reception (and I’m not talking about the Sigur Rós concert).

Almost the entire second half of the episode is dedicated to this ceremony, and it mostly involves two conflicts: the Lannister twins are adjusting to this new social landscape with characteristic jealousy and threats, while Joffrey constantly reminds everyone why we wish he would suffer a painful and humiliating death.

Tyrion joins the family table as Joffrey throws money at the minstrels (Sigur Rós!) to get them to stop playing “Rains of Castamere” (which you can listen to in full by throwing coins at Sigur Rós over the internet via Amazon for an MP3 of their rendition of the song).

The Westerosi equivalent of schmoozing happens. Cersei threatens Brienne and Jaime threatens Loras Tyrell, both actions serving as invisible tokens of their incestuous love for the other. Old Maester Pycelle is creeping on the ladies and Oberyn Martell (after making eyes at Loras) once again reminds the Lannisters that they are lucky that the people of Dorne don’t rape and kill women and children since one of Cersei’s brood is now in his homeland. 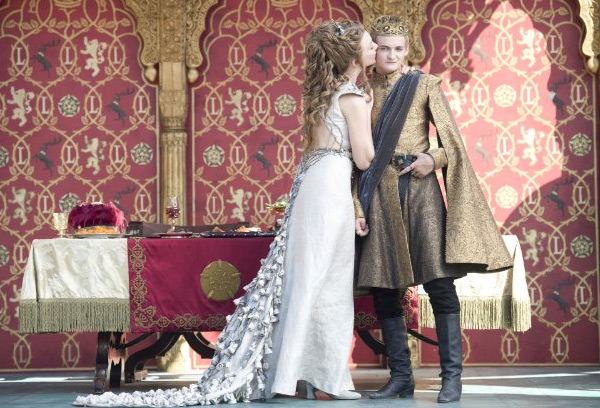 Joffrey makes a toast, asking for the contemplation of history, introducing particularly telling entertainment for the ceremony: a troupe of little people dressed as personalities from the War of the Five Kings.

Some people love it, others find it distasteful, Sansa finds it mortifying (Robb’s stand-in is having sex with a puppet of his dead mother instead of riding a false steed) and Tyrion makes sure that each of the performers is paid 20 gold when this is over as reparations for their exploitation.

When the battle is over, Joffrey tries to get his uncle to fight for his entertainment, but Tyrion expertly deflects the humiliation, asking that the newlywed king demonstrate his powers of combat (but to be extra careful to not getting raped while doing so).

For this, Tyrion is showered in wine as Joffrey empties his glass on his uncles head (“It did not spill,”) and makes the Imp his cup bearer (“It’s not meant as an honor.”) This leads to some excruciating public embarrassment, and just as Joffrey commands his uncle to kneel, Margaery interrupts to announce the arrival of the pie.

Tyrion and Sansa try to use the distraction as a means to hurry out of there, but Joffrey demands some wine to wash down the dry pie. The soaking wet cup bearer grabs a chalice from in front of Olenna, hands it to the king, who drinks it and proceeds to die a grisly, inglorious, and long awaited death.

That’s right, Joffrey Lannister drank poison at his wedding and died in terrible, excruciating pain. The fool Dontos Hollard grabs Sansa in the chaos and spirits her away to safety (presumably), while Jaime and Cersei hold their convulsing son as he coughs away his wretched abomination of a life. 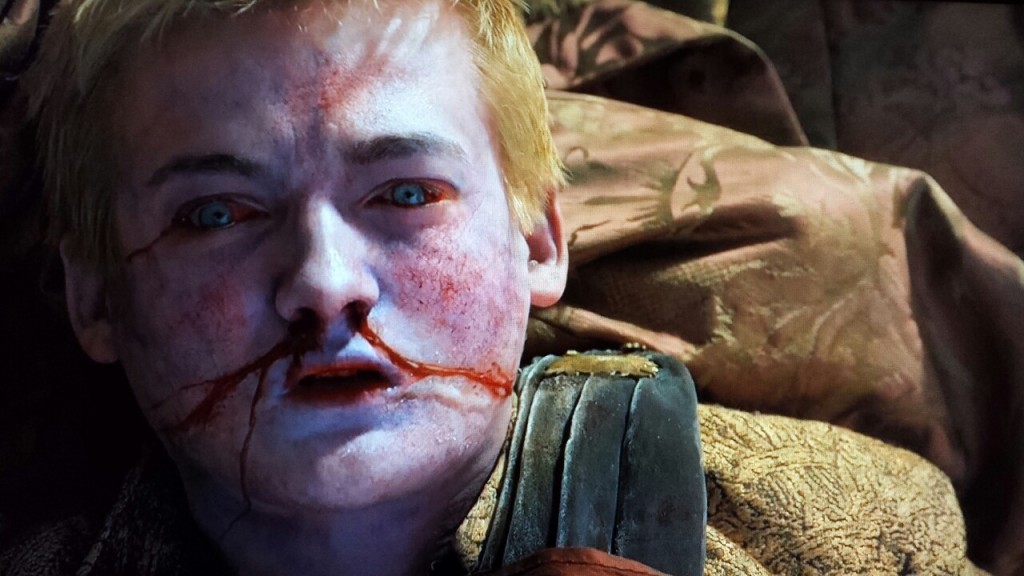 This death is exactly what we need to kick off the season. Game of Thrones is notable on a macro story level for how it tells a distinct arc every ten episodes. By killing off a major character immediately after we’ve made it through the woods of act one stakes-setting, season four gets to have a very distinct and exciting, Joffrey-less flavour.

Cersei points to Tyrion as the murderer (which he is probably not) and has him arrested, while, for good measure, the camera leaves us with a shot of the dead and tortured face belonging to the now late king of Westeros as a ghoulish reminder of the bastard blood magic curse placed on him last season by Melisandre and to never, ever tell Sigur Rós to stop playing your family’s song.