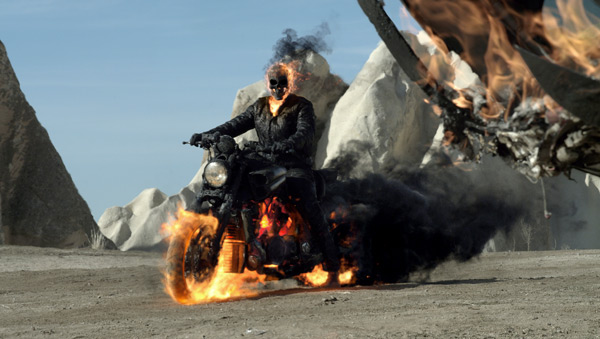 While technically a step up in quality from the first film in terms of storytelling, the second entry in the somewhat unnecessary Ghost Rider franchise still manages to feel like a bit of a missed opportunity given the talent both in front of and behind the camera. A film starring Nicolas Cage and directed by the duo of Mark Neveldine and Brian Taylor (Crank, Gamer) should be balls to the wall, action-packed insanity. Instead, what we get is a film that feels curiously neutered in terms of content and budget.

Shifting the action from the U.S. to Eastern Europe, Spirit of Vengeance finds anti-hero Johnny Blaze (Cage) trying to literally outrun the demon inside of him that forces him to turn into a flaming skulled spectre whenever he’s in the face of sin. The unstable Blaze finds himself recruited by an alcoholic French priest (Idris Elba) who wants him to protect a young boy (Fergus Riordan), who just so happens to be the son of the devil (even though in the first film, the devil had a son that needed to be stopped). If Satan’s human incarnatation (Ciarán Hinds, filling in for an absent Peter Fonda) gets his hands on him, he will pass along his essence to the boy allowing him another full life on Earth walking amongst the humans and committing atrocities. In exchange for protecting the boy, the priest agrees to absolve Johnny of his sins and rid him of the rider’s curse forever.

At its best moments, Neveldine and Taylor’s film feels like what a Ghost Rider film should be like. It’s assembled and shot in such a way that it resembles a full story arc from a run of the comics. The use of fade outs might seem amateurish, but they come at logical points to denote the beginning and end of a particular “issue.” The use of animation and creative visuals also hark back to their earlier work in trying to create on-screen video games. The duo’s knack to find a great shot and to establish a kinetic visual pace are also firmly on display here.

It also doesn’t hurt that their leading man clearly still has a deep love for the character that translates much better to the screen this time around. While the first film was filled with idiosyncratic touches that often seemed to make no sense, Cage instead tries for a more soulful performance here amid all the silliness. Sure, he still pisses fire, drinks entire pitchers of water, and has four pretty great “Cagey” moments, but the kookiness is dialed back considerably. For some people it might be a good thing, for others it could be seen as a demerit.

Still, it’s kind of a shame that the rest of the cast is all over the map. Elba sports a spotty French accent that really does nothing for his character, but he’s not bad. Hinds might be a step down from the hammy Fonda played Satan in the first film since he just seems sleepy here. Riordan and Johnny Whitworth (playing an arms dealer tasked with kidnapping the boy, who later becomes an undead supervillain) hold their own quite well against Cage. Violante Placido stands out as the weakest link as the boy’s mother because she doesn’t have much to do except screaming and shooting, but she still fares better than a nearly unrecognizable Christopher Lambert who shows up for two scenes and doesn’t do anything memorable.

The biggest problem here though has to be the obvious setting and budgeting restrictions placed on the project. Kudos to the production team for acknowledging that the film was made in Eastern Europe and not trying to dress it up, but the film fails on one very big level. All of the set pieces of the film have no bystanders around to witness them and the characters are too ill-defined to generate any tension on their own. Every shootout, chase, and fight happens along abandoned roads, wide open spaces, or empty castles. It’s well shot and the staging occasionally rises above the blandness, but it lacks the sense of grandeur that a film like this needs to succeed. It looks and feels like a quick and dirty production that was made while no one was looking.

Finally and probably least surprising given the film’s PG-13 rating in the States, the story comes across as obviously edited from a much nastier form. The dark wit of Neveldine and Taylor rarely gets a chance to shine through the by-the-numbers plotting (credited to David S. Goyer and two other writers). The choice of directors seems inspired on paper since Ghost Rider was always one of the darkest and nastiest comics in the Marvel universe, but to take the sandbox away from these guys and then telling them to play nicely in the middle of the street seems a bit disingenuous. Neveldine, Taylor, and Cage came to play, making the film probably better than it really is, but someone should’ve shelled out for better toys for these boys.