Ataxophobia- Fear of disorder or untidiness.

My greatest fear when watching Gotham on Monday nights is that by the end of the hour I will be stretched between multiple unfocused plots, painfully reminded of how terrible the the show used to be, and then left to try and find something, anything interesting to write about that goes beyond simple plot summary. Since episode four, I have been lulled into a false sense of security in the regard, but “The Fearsome Dr. Crane” has brought me face to face with my Monday night phobia. If Scarecrow were to harvest my adrenal gland he would find enough cortisol to complete whatever unethical science he’s working to further in this alternate Bat-universe.

In the tradition started with the exceptional midseason Electrocutioner arc, “Dr. Crane” is an attempt to have lightning strike twice: a two episode event that serves to introduce a redefined Bat villain. Only this time, instead of pulling a rogue out of the more obscure pages of the comics, Gotham is ready to have its hand at the Scarecrow. It’s a major milestone, considering the dark reflection of Batman’s weaponized fear will be the first of the Nolan-era villains to come face to face with Ben McKenzie’s Jim Gordon.

The failure of “The Fearsome Dr. Crane” is only on the macro level. It has great moments. In fact, when each of the episode’s many sub plots is isolated, there is very little to complain about. The problem is that whatever is good here is completely negated by a complete lack of focus that reaches a moment of laugh out loud absurdity by the episode’s final beat. It’s familiar territory for Gotham, which has regularly feared to commit to a central theme and forced itself into a benign plot structure, but never has it been so frustrating. 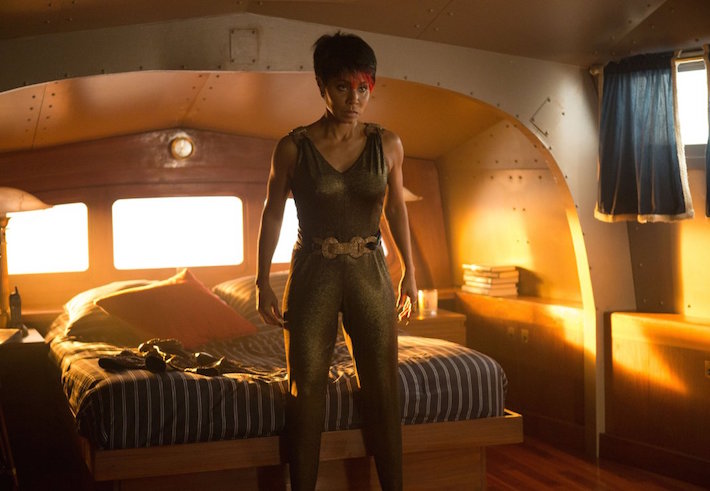 “Dr. Crane” has a strong start. In the show’s most distilled cold open to date, the mad doctor elaborately sets about harvesting the adrenal gland of Adam Jadowski, a man with a acrophobia (fear of heights). Tied to a chair and set on the ledge of a building’s roof, a noose around his neck, Jadowski is made to understand what’s happening to him before he dies. Crane tips the petrified man off the building, to his death, and then collects him and his precious cortisol engorged adrenal gland.

The title card rolls at this point and everything seems very encouraging. Usually Gotham’s cold opens last quite a bit longer than a single scene because they’re setting up an episode’s three plots. But this is “The Fearsome Dr. Crane”, a character introduction so dramatic and epic that it requires two full episodes of storytelling as the mad MD brings Gotham City to its shaking, urine soaked knees. Right? Wrong.

The next time we see Crane he preys on a man with swinophobia (fear of pigs). Chasing his victim down a daylit street while petting a little piggy, Crane has his henchman tase the poor scaredy cat and load him into a van. The victim is rescued by Bullock and Jim in the chair warehouse that Jadowski’s death-throne came from just as a man in a pig mask (that isn’t Professor Pyg) is about to knife the life and adrenal gland out of him (though maybe not the latter; it’s never made clear whether Crane is the only one who can harvest the viscera).

In between those two instances of twisted violence, “Dr. Crane” makes sure that we know what’s going on with nearly everyone we know on this show, related to the case of the week or not. Gordon kicks Selina Kyle out of Barbara Keane’s condo before being fired by Bruce Wayne as the boy’s private parent death investigator, Sal Maroni and Penguin go on a road trip upstate and Fish Mooney is revealed to be living on a freighter (though to be fair this last point is revealed after the swinophobic torture scene).

That’s a lot of episode. In fact, the best of those distractions – Sal and Pingu’s road trip – would have made for its own excellent Gotham entry. Sadly, as it is, “Dr. Crane” is over stuffed, and the lack of focus manages to somehow make the Penguin plot feel tedious.

In an attempt to get to the bottom of Oswald Cobblepot’s suspected treachery, Sal Maroni spirits his duck footed confidant to a cozy cabin in the woods under false pretenses. As romantic as that may sound, things get tense in the wrong way when Cobblepot figures out he’s at the end of his relationship with his second favourite mob boss.

Sal goes outside to gather wood for a fire and Penguin awkwardly pockets the boss’ handgun. Once reunited fireside, the two play a secret sharing game, and when things start to get too hot and heavy Oswald unloads the gun into Maroni only to find it was filled with blanks. Sal was playing Penguin all along and brought him on this romantic log cabin odyssey just to know for sure what his heart has been telling him this whole time: that Penguin’s in bed with Carmine Falcone, that old whore of a nemesis.

Clunky drinking-game-esque story devices aside, the road trip story really would have made for a great two-hander episode. Robin Lord Taylor and David Zayas are two of the show’s best actors, and their scenes exude tension. As the focal point of an episode, that chemistry alone could elevate Gotham to a certain level of excellence, but when billed as the B-plot to an episode about Scarecrow it drags everything down.

Speaking of Scarecrow, Bullock’s pursuit of an aquaphobic (exactly what it sounds like) woman named Scottie Mullen leads him to sit in the phobia support group that Crane has been using as his own fear farm. Mid-session, the man who will be Scarecrow manages to abduct Mullen and take her to a pool for his usual unsavory reaping.

The detective duo show up just in time and split up: Jim chasing Crane and Bullock saving a damsel in distress. Crane gets away, Bullock saves the girl and everything seems like it’s ready to wrap up. We’re treated to some love banter between Gordon and Dr. Leslie Thompkins (actual line of dialogue: “I have a powerful urge to kiss you right now.”) and Penguin, having escaped a junk yard deathtrap at the hands of Maroni, is rescued from the side of the road by a bus of church-going women.

Only this is a two part event and we need a cliffhanger. Maybe a clip of Crane abducting someone important? That would make sense. Or how about we go back to the freighter that Fish Mooney is on and artificially heighten the stakes by killing the crew and introducing a character that clearly has a complicated past that we don’t care about. Then we cut to credits right before the new guy and Fish punch each other.

Does that second option sound like a good way to end anything? Because it’s not. It’s like closing the chapter of a book with the line “And almost everything was okay in the end, but then he opened the door and couldn’t believe what he saw!” It’s the television equivalent of clickbait and if I didn’t want Gotham to be good, if I hadn’t already seen its great potential, I would laugh heartily at its misfortune of being so poorly handled.

What I’ve described here are three plots – Crane’s rampage, Penguin’s road trip and Fish’s river cruise – I left out the Jim Gordon love plot with Dr. Thompkins as well as Ed Nygma’s getting suspended from work and reinstated after some expert riddling. Both plots are at least mildly entertaining, but they further distract from the main event: “The Fearsome Dr. Crane” is supposed to be about Doctor Fucking Crane. It could be that this is all a problem of framing. If this episode was named “A Trip Upstate with Sal and Pingu” perhaps the whole thing would feel a bit less exploitative, if still over-stuffed.

The episode is so muddled in this way that I have to wonder if it’s a result of the extended episode order Gotham received in the fall. Maybe “The Fearsome Dr. Crane” is padding, artificially lengthening a single Scarecrow focused episode into two so that the daunting prospect of nine more episodes doesn’t seem so nightmarish. But then again, maybe it isn’t. Maybe this is how everything was supposed to happen and the greatness that produced “LoveCraft” and “The Mask” was a fluke. Maybe a Batman prequel is impossible or worse: maybe his stories don’t matter anymore. Maybe nothing matters anymore. I hope these fears are irrational. Let’s start a support group.

-Selina’s eating Frute Brute when Gordon finds her in Barb’s condo.
-Obviously Batman still matters. I just wanted to say that for the record.
-Dr. Crane’s son’s name is Jonathan, and though Scarecrow’s alias changes depending on the material he appears in, the Cillian Murphy version from Batman Begins share’s the child’s name.  Are we looking at a Green Goblin-esque villain legacy here? When Bruce dons the cowl, will he fight the old man or pick on somebody his own size?
-Much of the frustration I voiced about this episode is also probably connected to Gotham’s over reliance on its best parts. Penguin and Riddler are always amazing, but both keep being put through the exact same pieces week after week in a holding pattern that has miraculously worn out their charm. Having Nygma win his job back at the end is less than encouraging in this regard.
-That said, let’s hope his dismembered limb stunt is the beginning of a long, maddening descent into morbidly pranking important people.
-Trope alert: the climactic pool scene with Scottie Mullen sure felt an awful lot like damselling. Almost as if the love plot between her and Bullock was thrown in solely to heighten the male detective’s personal stakes. This would not be the first instance of Gotham displaying a strange attitude toward female love interests.