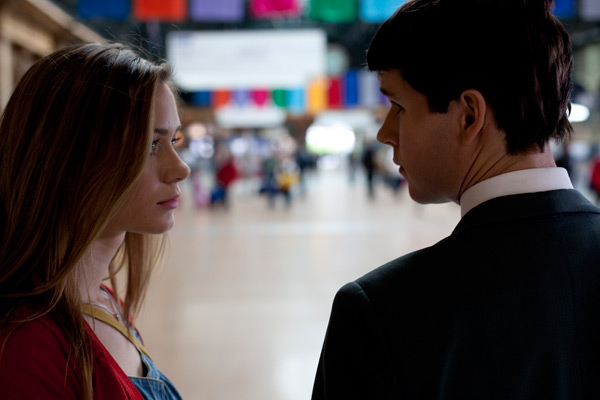 Griff the Invisible is an odd little film, one that wears a big heart on its sleeve. Writer/director Leon Ford has created a film that is equal parts enamouring and sad. The film stars Ryan Kwanten (True Blood‘s Jason Stackhouse) as the titular Griff, a quiet loner who doubles as a masked vigilante by night. What makes Griff the Invisible different from the growing roster of DIY vigilante movies (Kick-Ass, Defendor, Super, et al.) is that our hero’s crime-fighting adventures are essentially made up. His foes are imagined fantasies and his feats gross exaggerations of his own creation. It’s a relatable tale of outsiders who try to fit in the only way they know how.

Griff’s main issue is that he never really grew up. Always daydreaming, his runaway imagination gets him into trouble more often than not. He is ostracized by his office coworkers, toiling away his days in a lonely cubicle and escaping to his small apartment at night. It’s here, at home and alone, that Griff really comes into his own. Donning a home-made costume he becomes Griff the Invisible, patrolling the streets of Sydney and fighting crime… apparently. He soon meets Melody (Maeve Dermody), an equally quirky soul who is convinced that she has the power to phase through solid objects. When she inadvertently discovers Griff’s dual identity, she encourages his “crime-fighting” capers, if only so that he will come to believe her own outlandish pursuits. The two share a child-like sense of wonder, suspending their disbelief in the impossible in the way that only children can.

Having only seen Kwanten as Jason Stackhouse on HBO’s True Blood, it was strange to see him play such a sullen character (it was also surprising to learn that Kwanten is in fact Australian. ACTING!). He turns in equally solid performances as the introverted Griff and his take-charge, costumed alter ego. Griff’s ridiculous schemes to create an invisibility suit — one which entails soaking a cloth suit in invisible ink — become believable simply because Kwanten sells the character so well. Griff thinks he is invisible so the audience accepts that reality. Maeve Dermody’s portrayal of Griff’s counterpart Melody is just as intriguing. Perpetually sporting a bruise on her forehead (from trying to pass through her bedroom wall) and spouting obscure science factoids at inopportune moments, she’s exactly what Griff needs: A kindred spirit. The two main characters are very strange people, but despite their eccentricities they never become caricatures of themselves. Thanks to Kwanten and Dermody Griff and Melody feel like real people. Very odd, slightly disturbed real people, but real people nonetheless.

Director Leon Ford and his production team manage to show Australia in a different light than perhaps North American audiences are used to. No dusty outback found here. The dark streets that Griff stalks at night — which could easily be at home in Gotham City — and his grey and white office space — like something out of The Matrix — offer a stark contrast to the colourful locations that populate the city’s daylight hours. Shot on 16mm, the film has a decidedly “filmy” look. It’s an interesting aesthetic choice that doesn’t do the low-budget feature many favours, but the rough around the edges feel certainly fits with the do-it-yourself message of the movie.

The film does tend to drag in the third act and the conclusion is a slightly anti-climactic, but this opinion could be my expectations talking. Griff the Invisible is marketed as a low-rent superhero actioner, but it’s actually more of a romantic-comedy of sorts. Despite these minor complaints, the bottom line is that solid, sympathetic performances and charming style make this indie a real hero.