F For Fake (Orson Welles, 1975) – Orson Welles might have spent most of his life struggling to make films after forever changing the medium with Citizen Kane, but he also never made a bad movie amidst those endless struggles. After tiring of his constant battles with the studio system in the 40s, Welles essentially spent the 50s, 60s, and 70s in filmmaking exile. With the exception of Touch of Evil (arguably his second greatest achievement even though he never officially finished it), Welles directorial efforts for 30 years were created in piecemeal when he could afford to personally finance them from acting gigs. Only five of his personally financed movies were completed over those three decades, with many more left barely started or unfinished (including his legendary 70s Hollywood piss-take The Other Side of the Wind, which is allegedly being edited by Peter Bogdanovich as you read this after decades of rights entanglements). Although all of Welles’ European exile movies have a fragmented and incomplete quality to them that reveals the handmade nature of their production, that’s almost a part of their charm. Unintentionally, Welles became an indie filmmaker long before that side industry existed and none of his movies spring more from his skill with turning pennies and fleeting opportunity into influential cinema like his official final film F For Fake.
Aside from Jean-Luc Godard’s later efforts, there’s no real point of comparison for F For Fake. It’s not really a documentary even though it assumes that form, nor is it fiction even though it’s filled with lies. Nope, it’s an essay movie about fakes; a strange exploration of two interconnected tales of deception, a fictionalized bit of fakery at the audience’s expense, and Welles’ personal admission that he is in fact a fake (unless that’s yet another bit of fakery to fuel his self-depreciating legend). The film began when Welles discovered unfinished footage for a documentary about Elmyr de Hory, an infamous art forger whose work was so mind-bogglingly impressive that it became an art form in itself. Elmry’s charm and skill with fakery clearly tickled Welles and when he discovered that the man’s official biographer Clifford Irving turned out to be a fake himself after writing a fictionalized Hoawrd Hughes biography and passing it off as the real thing, Welles became fascinated with the story. He took the footage of Elmyr and Irving from the doc and strung it together with mounds of his own material to create a cinematic ode to frauds, including his own personal experience in the subject and all the ways that movies have a distinct power to lie to their audience.

Watching F For Fake for the first time can be overwhelming. It’s a difficult film to pin down since there’s nothing else quite like it. Sure Welles’ gift for showmanship is on full display in his boisterous monologues, magic tricks, and rat-a-tat proto-MTV editing, but it’s also easily his most experimental project. There’s no narrative to cling to and Welles deliberately discarded all of his usual cinematic tricks. Instead he crafted a collage of images, anecdotes, information, and lies strung together only for their thematic connection. Add to that the fact that Welles’ uses every conceivable means to lie to the audience through cinema so that you’re never sure what to take literally or why and you’ve got a puzzle box movie with no definitive answers. 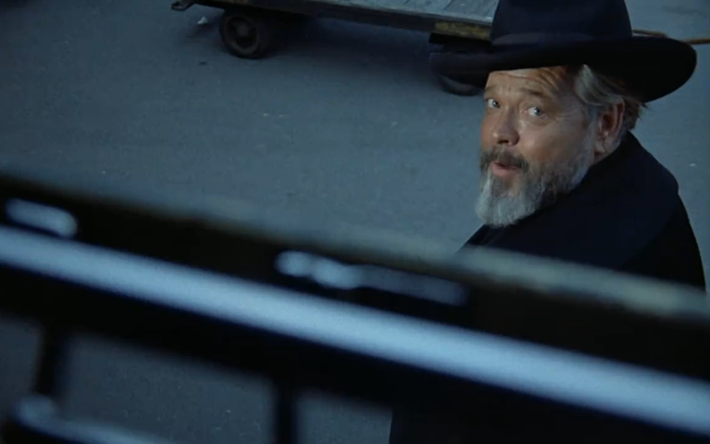 Yet, that’s also the point. Like all of Welles’ endeavors, For For Fake is a work of entertainment as much as it is art. Sure, there aren’t any genre or narrative conventions to cling to for support, but Welles is still trying to offer the audience a grand old time. It’s just that this time that entertainment comes through what can only be described as a cinematic essay on trickery and also a grand cinematic trick itself. Sound confusing? So is the movie, just not in a frustratingly opaque way. The entertainment comes from the confusion of sorting through fakes piled on fakes as well as the fun to be had in being swindled. When Welles slows the film down in the middle to discuss how he considers his entire career to be an act of fakery that has convinced the world he’s an artist when he’s little more than a con artist, it’s impossible to tell whether it’s a moment of sincere confession amidst a sea of deception or just another trick, this time on viewers who seek to find autobiography in all of Welles’ work. Either way, it’s just one more point of discussion in a movie that’s practically designed for coffee shop debates that stretch into the end of time. Not bad for a movie that Welles made out of stock footage and a handful of rushed shooting days with a budget comprised of broken promises and favors.

F For Fake slips onto Blu-Ray courtesy of the good folks at Criterion, and it’s one hell of a disc. First up, the new HD transfer is absolutely beautiful. This might be a cheap film, but Welles didn’t make ugly movies, so the barrage of colorful images and visual gags more than makes up for the cheap production. Criterion has painstakingly restored each and every frame so that it pops off the screen in blindingly bright colors with depth and clarity never before visible. It’s a gorgeous restoration that makes F For Fake that much more of a pleasure to watch. Welles would be proud.

The special feature section is also loaded with goodies. Ported over from Criterion’s old 2005 DVD release is an introduction from Peter Bogdanovich, a sincere documentary about Elmyr de Hory, an audio commentary by Welles’ partner Oja Kodar and his cinematographer Gary Graver about the unconventional production, an awkward 60 Minutes interview with Clifford Irving chatting about his lies, and an amazing 10-minute trailer for the film produced by Welles. Yet of all the returning features, the best of all is the extraordinary 88-minute documentary Orson Welles: One-Man Band about his unfinished projects featuring rare footage from them all. It’s a wonderful archive of all the great work that Welles left behind incomplete, including tantalizing footage of The Other Side Of The Wind that hopefully Criterion will release on Blu-ray in its entirety within the next few years. Finally, a couple of new features have been added that are more than welcome. First up comes the complete 20-minute press conference that Howard Hughes gave by phone refuting Irving’s faked biography, which is a nice addition. Even better is a 44-minute interview between Tom Snyder and Welles around the release of F For Fake that delves into the legend’s entire career with his typical mix of candor and wit.

Toss in a booklet with an essay by Welles scholar Jonathan Rosenbaum and you’ve got an extraordinary Blu-Ray for Orson Welles’ final masterpiece. F For Fake is far from a movie for everyone, but if you’re even remotely interested in Orson Welles then this Blu-Ray demands a place on your shelf. It is both his final masterpiece and a sad testament to his monumental talents. If Welles could make a movie this interesting in the 70s with barely any resources, just imagine what he could have done with a proper film production. Hopefully we’ll find out when The Other Side of the Wind is finally released, provided that’s one more big lie at our expense of course. (Phil Brown)