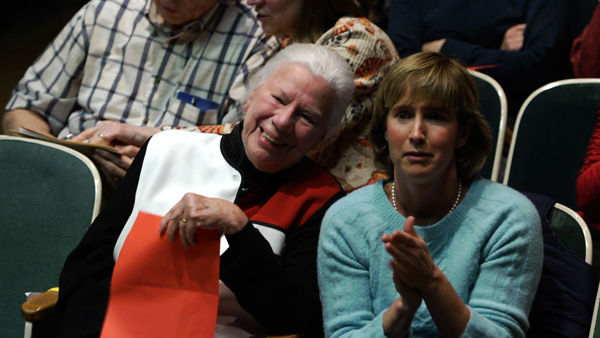 Filmmaker Kris Kaczor travelled to Concord, Massachusetts – home of historically rich battleground and famous transcendentalist writers – to document a different kind of revolution and groundswell of environmental activity. Only this time instead of taxation without representation or the protecting of historic woodlands, the contention is over bottles of water and the battle field is the city council. And it’s all being spearheaded by one 82 year old woman.

In his film Divide in Concord (which debuted at Hot Docs this weekend), Kaczor follows the advocacy efforts of Jean Hill, an elderly woman who tries to pass a bill effectively banning the sale of non-sustainable bottles of water in local stores. Citing the damage that unrecycled plastics can do to the ocean and the general waste, Hill unsuccessfully tried twice before Kaczor joined her in 2012 to get her town to adopt the practice, only to get stopped both times. Kaczor documents what might be her final effort to succeed, and her most contentious fight on the issue yet. She does battle with supermarket owners in the pocket of big bottlers, an industry that can afford flyers to advocate for their position (while Jean, in declining health, is forced to go door to door), and people like Boston Herald writer, local resident, and former PR maven Adriana Cohen spearhead the opposition for people who want politics left out of their right to convenience.

We chatted with Kaczor over the phone just prior to the festival about how he heard about Hill’s political battles, his relationship to his subject, and how he always strove to make a fair and balanced movie that showed both sides of the issue at hand.

Dork Shelf: Where did you first hear about this ongoing battle between Jean Hill and the town around her over the subject of a bottled water ban? 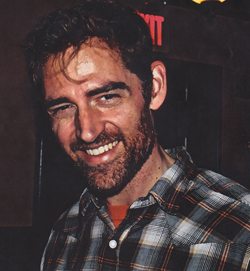 Kris Kaczor: I actually heard about it first in The New York Times. It caught my eye at a point when I was focused on anything that had to deal with water. This was definitely a part of that. I contacted Jean, and it was as simple as actually being able to find her number in the phone book. She said that the first year hadn’t worked out because they didn’t really have the proper mechanisms in place to hear the proposal, so they were deciding to go back and try again. The second year they lost by seven votes. That return was when I actually joined her and I asked if she would be opposed to me doing a five minute piece just on her so the story doesn’t get lost in the media, and she said “We’re going back again for a third year and if you’d like to follow along and film a documentary, feel free.” That was kind of her idea and I just said “absolutely.”

DS: What was the frustration that you got from Jean after she had already gone through this process twice before you spent time with her? Was it different from what you were able to infer from that New York Times piece?

KK: What I got from her that was really interesting was that she was so sincere in her efforts. She was obviously struggling. I had a lavalier microphone on her with the monitor on the whole time while I was filming, and I could hear her struggling and panting. She was going door to door and she was really persevering through everything. She broke down a few times and said “This is hard. This is not easy, but I need to keep going because the bottlers are a pack of scoundrels.” Those were her words. (laughs)

DS: People usually equate this kind of legislation and movement with young people, and not necessarily an octogenarian. Were you taken aback that the average age of people associated with this movement were generally older than most of the people involved in such efforts as this?

KK: Yeah! It was interesting. Then the natural question there is “why?” I think it comes down to the fact that the actual spirit of a Concordian is quite unique. Thoreau is from there and he started the environmentalist movement. It was the home of this feeling of revolution that was going around, people old and young alike. I think the older generations of Concord, which are very learned and well read people – lots of Harvard grads and things like that – are very active. They are active towards social change.

The fact that it was a group of elderly people worked probably more so because they had more time than anyone else. But this was very much a multi-age thing. We had plenty of high schoolers and middle aged people alike. The interesting thing for me was that it was spearhead at the time by Jean Hill at 82 years old.

DS: I grew up in Massachusetts, so the history and culture of Concord past and present have been a big part of my upbringing, and you’re bringing the history of the town into this kind of revolutionary fight. Where did you as a filmmaker start to make those parallels to your story?

KK: It was really done for us. Before I even went into the first shoot with Jean, she told me that she wanted to fire the second shot heard ‘round the world. That was her goal, and she said that even though it sounded corny, that it would be just that. There was no other town in the world that had done this, and she felt that with the populace of Concord being very environmentally minded that there was a chance they could get it passed. It’s also not an easy task when you’re going after the third largest corporation in the world.

DS: I can imagine. Has anyone involved with the bottled water industry seen your film yet or has there been any kind of backlash or propaganda to discredit Jean’s role in the film so far? Because it’s clear from their actions here that bottlers will go to great lengths to protect their investments.

KK: That’s a good question, but I’m actually not expecting any issues. That’s mainly because the goal from my perspective was to make an objective film. I respected all the characters, and I was very much interested in everyone’s story. For example, in how I treat Jim Crosby and Adriana Cohen. I showed Adriana the movie, and she’s fine with it even though she’s kind of the face and voice of the opposition. She thinks she’s represented fairly, and she wants to be known as a person who doesn’t stand for politics, but she does stand for the issues. She thinks like that and it seems like everyone else does, too. I think what we have is very representative of reality. That was my goal for the film: simply show things as it was happening with all sides included. I’m curious what happens when the bottlers do catch wind of it and see if they’re represented properly because I think the people in the film kind of working on their behalf are represented properly through people like Adriana.

DS: It’s interesting to see that dichotomy between Jean and Adriana, because Jean is passionate, but clearly not media trained and easily flustered, and Adriana has been trained to key in on people and their weaknesses to a point where she can win any argument if she phrases it correctly. The scene in the film where they both appear on a call in radio show debate is kind of hearbreaking to watch because Jean gets destroyed and almost sinks her own cause. Was it harder to get Jean to open up as opposed to some of her opponents?

KK: Not really. She treated the whole thing as a wonderful way to meet new people, and that really carried her through some of the tougher spots, I think. She kept saying how happy she was to have new friends, especially to myself and (producers) Dave Regos and Jaedra Luke. She would say she had three new friends and we were always comfortable to talk about everything. There was never a time when I felt like we weren’t getting the full picture, especially on camera. She got used to the camera within seconds and we were good to go.

DS: What kind of a friendship did you guys strike up?

KK: Well, it was mainly film-centred, and a lot of that was really because of the schedule that we had to put her on. Because of her age she could only go in about two hour increments. She would often call me a slave driver and things like that. (laughs) With everyone in the film I would say we were their friends, but a lot of that was because we were very respectful and up front about saying that everyone had different opinions. We were walking a fine line, but we never did anything behind anyone’s back, either. We were very open with everyone involved. We were covering all sides. It was more a process of true democracy, really. The filmmaking that results is a way of showing true democracy on film.

DS: Leading up to the vote, there’s a real sense that this is the last shot for anyone to do anything with this bill, and some people around Jean are even telling her that they wouldn’t go through a fourth round of this. Did you ever see the vote skewing one way or the other, and were you surprised how it turned out in the end?

KK: I think we had no idea which way it was going to go. The town was truly divided. We would interview one person and then another, sometimes two people at once, and it seemed like it was always 50/50. When it came down to that actual final town meeting, I remember watching through the monitor in the camera that I was filming with and feeling like I was watching the movie before I had even started editing it. It was a nail biter that could have gone either way. It was very unclear as to which way it would go. But the outcome of the vote itself didn’t change the ultimate outcome or structure of the film pretty much at all. We do not take sides in the argument, and both sides have compelling arguments.