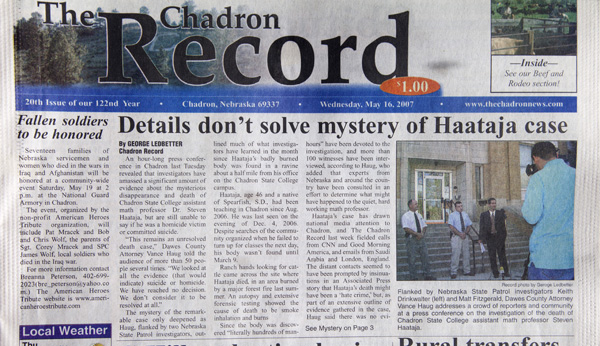 Love and Terror on the Howling Plains of Nowhere

Easily one of the most unique movies screening at this year’s Hot Docs, Dave Janetta’s Love and Terror on the Howling Plains of Nowhere initially presents itself as being about a murder mystery, but gradually transforms into a portrait of the community surrounding a possible murder. The title comes from the book by author Poe Ballantine and indeed the style of the film comes from that book as well. Ballantine moved to the isolated Chadron, Nebraska years ago looking for a quiet place to write. His work is centered in autobiography, but his goal is always for that to act merely as a launching pad. In 2006 local Math professor Steven Haataja was found burned to death in the middle of a field. The official ruling was suicide, but most people in the community can’t imagine that’s possible. Ballantine was there at the time and wrote a book that explored the case and paralleled the mystery and Haataja’s life with his own (both men spent years as slaves to depression before finding a home in the strange community). Janetta’s doc follows a similar structure and while Ballantine remains the primary focus, the surrounding voices of the strange community gradually take over the film.

What emerges is not unlike a light documentary spin on Twin Peaks, a murder grabs the audience’s attention and pulls them in, but the subject is really the unique community surrounding the crime. We’re introduced to everyone through their reactions and theories surrounding Haataja’s death, but the filmmaker gradually departs from that lynchpin to paint a strange, funny, and heartfelt portrait of a sweetly bizarre little population of people who can’t quite explain their attraction to the patch of flat land they all call home. All that makes Janetta’s film sound unfocused and yet the director is in clear control at all times. While this may be a film of tangents, they all flow together beautifully in funny, moving, and intriguing ways. The cinematography is beautiful without distracting from the subjects, and everyone on camera from Haataja’s family to local business owners are so warm, eccentric, and interesting that you’ll wish their stories could continue long after the credits roll. This is a bizarre documentary that’s difficult to describe or explain, but a warm and entertaining one begging for discovery. A real find from the Hot Docs programmers that’s not to be missed. (Phil Brown)