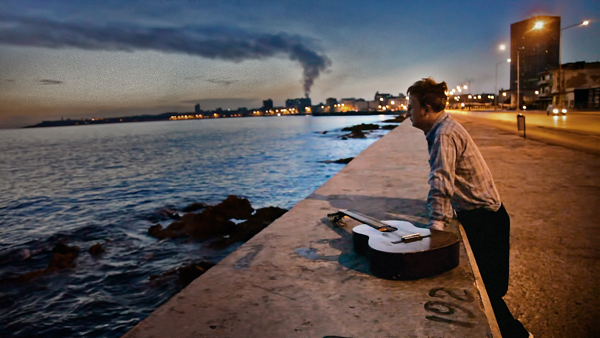 Matthew Stoneman doesn’t look like much until you hear him sing.  Riding his very unique gimmick of being “America’s First Gringo Mariachi Singer”, he puts in the hours to attain success and stardom.  An ex-con who ended up falling in love with music, he saves every nickel that he has in order to take trips to Cuba to record an album.  But it has taken him seven years and the question arises if he is there for the music and access to talented and inexpensive musicians to collaborate with or the beautiful women that inhabit this sun drenched paradise that he loves so much.

A great subject can very often make any filmmaking flaws very easy to over look, as Mateo just makes for an interesting ride. It would have benefited the film if director Aaron Naar had been able to give us a little more background on our subject, but the film doesn’t suffer.  As Matthew plays parties & street corners in Los Angeles or records and chases women in Cuba you can’t help but get drawn into this story.  Naar to his credit shows his subject flaws and all, but also how true talent rises to the stop.

Mateo is a “started at the bottom and now we’re here” kind of story, but it works because you want to watch this compelling man achieve his dreams. (Dave Voigt)