We just can’t stop with our coverage of the 2012 Hot Docs International Documentary Film Festival as we enter our third day of coverage, today taking a look at some sports and pastimes (China Heavyweight, Low and Clear, Brooklyn Castle), the performing arts (The Frog Princes, In the Year of Hip Hop), dangerously cheap food (Finding North), dangerous alliances (The Betrayal), and a man who just can’t live without his radio (Radioman).

And don’t forget to check out our first and second batches of reviews, too!

NOTE: Screenings marked as RUSH ONLY were rush as of press time. Always check an official source before heading out. For a full list of films, showtimes, venues, and tickets, please visit hotdocs.ca.

Recommended?: Yes. If you love underdog stories and are tired of standard sports docs, this one is for you.

This beautifully shot boxing doc takes the familiar sports movie formula and transplants it to rural Sichaun province in China. Tracking the careers of a promising former fighter turned coach and two of his most talented students, China Heavyweight has all the hallmarks of a great sports doc – it even has a comeback fight. Inner turmoil and self-doubt prove to be even more formidable opponents for the boxers featured in the film. Just as the fighters in the film emulate western boxers like Muhammed Ali and Mike Tyson, Canadian filmmaker Chang (Up the Yangtze) rightly emulates a tried and tested recipe for sports movie success. Aided by the relatively unfamiliar backdrop of the People’s Republic, Chang’s film is a sweet left hook in a genre full of predictable punches.

Banned for years under the Communist regime for being too violent, western-style pugilism has gone through a renaissance of sorts in recent years. The film briefly touches on how Communist party sports authorities handpick potential fighters from schools at a very young age, but the doc mostly deals with individuals who have been a part of that system for a major portion of their lives. It would have been interesting if the film had followed one of the very young prospects in those early days – instead we see the end result of years of training and dedication. It’s not always pretty, but there’s a lot to root for in China Heavyweight. (Will Perkins)

In the Year of Hip Hop

Program:  Made in Southeastern Europe

“People can’t just identify with your story if it’s just about: I roll joints, I smoke all the time, oh yeah, hip hop, street, gun kill, stab…that’s just hilarious” says a Slovenian MC in Boris Petkovic’s In the Year of Hip Hop. It’s this desire to keep it real that grounds Slovenian MC’s funky, punk-infused songs, setting Slovene rap apart from all the rest.

In the Year of Hip Hop takes accounts from several pioneering Slovene rappers like 6 Pack Cukur, N’Toko, and Klemen Klemen. Their testimonies show just how far this art form has come from its comedic origins to now being utilized to raise awareness to problems of unemployment and government neglect.

With song lyrics that push divisive agendas like “Englishmen are moving here because of our cake” and “the whole Slovenian system is fucked up”, Petrovic shows just how entertaining a revolution can be. (Brandon Bastaldo)

According to I.S. 318  principal, Mr. Rubino, the “geeks are the athletes.” I.S. 318 is a middle school in Brooklyn, New York, that has won twenty-six national chess titles – more than any other school in the United States. However, with the economic downturn and three-quarters of the student body living below the poverty line, the future of their chess team is threatened by budget cuts.

Rochelle, Pobo, Alexis and Justus, the most gifted kids on the team, (and Patrick, determined to overcome his ADHD by learning chess) are incredibly resilient under the pressure of their circumstances. They manage to juggle high school placement exams, student body elections and home life all while maintaining I.S. 318’s first place standing in America. At its heart, Brooklyn Castle is an uplifting story of five incredible children with chess just as the background. (Sasha James)

An absorbing and heartwarming look at the power of using drama to find one’s voice, Majeed and Mullins take us behind the scenes of a drama therapy group as they begin mounting a production of The Frog Prince.

With a cast made entirely from people with special needs and developmental disabilities, the motives and techniques of director/instructor Dr. Stephen Snow might seem somewhat pretentious, but his intent is firmly rooted in trying to help these actors break away from social stigmas and build their self esteem. The results of his efforts are certainly on screen. Far more intriguing than the teacher, however, are the actors themselves who show their star power and magnetism by being themselves. These guys are shining stars both on the stage and off. (Andrew Parker) 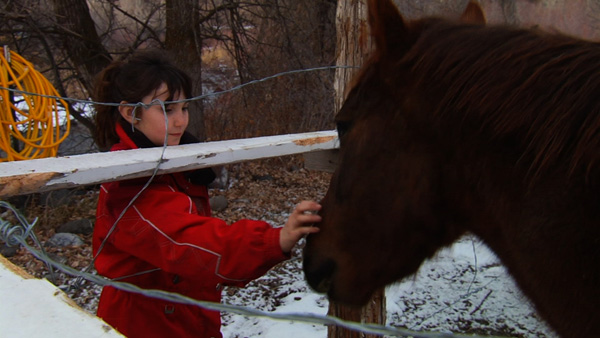 Since the 80’s, American’s have been promised an end to starvation. However, directing duo Jacobson and Silverbush’s Finding North shows that 49 million Americans are waist deep in this highly unpublicized famine that attacks the nations’ very foundations: its youth.

Focusing on the stories of numerous hungry Americans, Finding North also closely follows what an adolescent girl and a young mother of two goes through to keep their families from starving. As it becomes clear that America’s obesity epidemic is systemically linked to the same tiresome cycle of malnourishment that troubles so many American’s, Finding North hits home with its sobering plea to a government that has shown it will not feed the impoverished.

Featuring an uplifting soundtrack by T-Bone Burnett and The Civil Wars, Finding North is all about the hope that people in the toughest of situations battle to hold on to. (Brandon Bastaldo)

Radioman is easily the most star-packed documentary of Hot Docs, filled with cameos from the likes of Tom Hanks, Meryl Streep, Johnny Depp, and Robert Downey Jr. They all speak about one of the staples of the New York filmmaking scene, a bearded, balding former homeless man known as “Radioman” named after the vintage boombox perpetually strapped to his chest.

Craig Castaldo has visited every Big Apple set for decades and scored cameos in dozens of productions. Director Mary Kerr follows the lovable eccentric around a variety of sets and probes him for information about his past, digging up tales of alcoholism, homelessness, and a brief stint in a mental institution. Castaldo is a genuinely charming guy and it’s clear how he managed to endear himself to so many celebrities.

The only problem is that his life doesn’t give the film much of an arc and Kerr’s attempt to force a climax out of Radioman’s failed trip to the Oscars is a dead end. There really isn’t much drama in Castaldo’s life. Visiting sets is all he needs and what that’s great for him, it just doesn’t give Kerr much to work with while struggling to conclude this sweetly funny profile. (Phil Brown)

Recommended?: Not unless you adore fishing and think it has an inherently philosophical side.

Much like bowling and golf, fishing is a sport/pastime that would be better to experience for oneself instead of watching other people do it. This look at two fly fishing enthusiasts on their way to BC for an angling retreat will appeal to no one other than super fans and those searching for some great nature photography.

Of the two subjects, the hotheaded and relentlessly analytical Xenie adds some spice to the film, but J.T., the zen-like philosophical one, prattles on with the kind of white noise that sounds like someone who’s looked into something far too deeply. It’s mostly well photographed despite a propensity for artsy, blurry tilt shift camera shots, and the score (featuring music by Townes Van Zandt) is nice, but they do little keep the film from being too condescending towards those who could care less about fishing. (Andrew Parker)

Screens with: Written in Ink (11 minutes)

First time director Winther defines ‘soul baring’ in this heartfelt introspection that examines a troubled youth spent hurting many of those who cared for her. Unhappy with home life in her early teenage years, Karen first joined an extreme leftist group called “Blitz” before turning around and aligning herself with Oslo’s neo-Nazis, making her a marked girl who often feared for her life in her own town.

More a search for reason than forgiveness, Karen’s own diary entries come the closest to identifying motives that she herself still does not fully understand. The politics of the opposing groups seemed to matter little to the bright but confused 15 year old who just wanted to be somewhere she was valued. These acceptance issues stem from Karen’s relationship with her mother, which is the source of the film’s most emotional scenes as her mom tearfully recalls confrontations such as the one that resulted in a severe beating from her own daughter. The Betrayal is hard to watch at times but only because you can see how hard it was to make.