Our first batch of reviews for this year’s Hot Docs International Documentary Film Festival run the gamut, showcasing the kind of eclectic programming the festival has been known for over the years. Today we have looks inside the worlds of art (Ai Weiwei: Never Sorry, James Franco’s Francophrenia, Inocente, Wildness), commerce (Smoke Traders), literature (The Mystery of Mazo de la Roche), health care (Playing the Fool), and horrific true life crimes (Jeff, The Great Liberty, The Invisible War).

Here are our thoughts on ten of the films we were lucky enough to catch before the festival kicks off this coming Thursday, and what better place to start than with the opening night film? Come back throughout the week for more reviews and interviews from this year’s festival.

(Note: Films labeled as RUSH next to screenings times were that was as of press time. Always check before heading out. For more information, tickets, and a full list of titles and schedules, please visit hotdocs.ca.)

An all encompassing look where Klayman wisely never portrays her subject as a saint 100% of the time, the film comes frontloaded with Weiwei’s recent history in coming out against his own country’s Olympic games and his quest for transparency with regards to shoddy, deathtrap schools that killed thousands of children during the devastating Sichuan earthquake several years ago, before going back and telling his origin story.

Not only does it paint a comprehensive portrait of a creative figurehead, it also serves as the best document to look at the power of Twitter on the political landscape thus far. (Andrew Parker)

Confrontational documentarian Dick returns with a searing indictment of sexual abuse in the military that’s calculated to cause outrage, delivering distressing secrets that lay hidden for too long. Dick and collaborator Amy Ziering dig up some sobering statistics, but the driving force behind their unsettling documentary is a frightening number of first person accounts of men and women who reported sexual abuse and were either outright denied help or blamed by their superior officers for the incidents.

Military law allows officers to pick their own juries and punishments, and the only relief the military seems to offer are ridiculous training videos blaming women for walking around their own barracks alone and laughable slogans like, “ask her when she’s sober.” Angry rallying cry documentaries like this come out every year, but rarely are they so potent or pertinent. A movie begging for a wide release simply to draw attention to a sadly ignored issue, The Invisible War might be the biggest feel-bad movie of the festival and given the subject matter, that’s a compliment. (Phil Brown)

Recommended?: Yeah, but with some strong reservations

Alternately a well intentioned and informative look at a vital positive space and a self-indulgent wank from the film’s director, Wildness has too much going for it not to recommend it, but it falls apart at the conclusion because the director seems to think he was the only person running Los Angeles’ iconic queer landmark, Silver Platter.

Lovingly documenting the rise of the Latino tavern into a hotspot inhabited largely by transsexuals and hipsters, the history lesson and role of the bar in the community has some really great things to say about not only queer issues, but also about immigration and the media.

Unfortunately, it’s far too obvious that Tsang is out for self-promotion more than altruism and awareness thanks to some heavy handed narration and a final 15 minutes where he rails against the new proprietors of the bar who cancelled his more hipster, less queer themed club night that the film gets its title from. It’s a really sour and icky note to go out on, but for the most part, Tsang does well by the place. (Andrew Parker)

Smoke Traders documents Canada’s First Nation’s cigarette industry and attempts to assess the grayness and validity of the laws it breaks. The film concentrates primarily on two people: Rob, a factory owner who has made millions manufacturing cigarettes and selling them tax-free outside of the reserves, and Brian, a cigarette runner who is “getting too old for this shit.”

The documentary raises some very interesting talking points, especially since this industry has seemingly become the backbone of their economy and cracking down on it seems to create more problems than it solves. However, the fact that Rob ends up coming off like a capitalist who has learned to take advantage of a flawed system while Brian is much more sympathetic in his desire to leave the cigarette business in favour of starting his own solar panel one suggests that the smoke traders’ day in the sun may be passing. (Noah Taylor)

Program: Made in Southeastern Europe

For 17 years a group of Bosnian refugees from a psychiatric hospital have been sheltered at a hospital in Hungary with little progress made on getting them back home in Djurkovic’s slice of life story.

Told mostly through the eyes of a 75 year old former pickpocket named Redzo who doesn’t seem to have anything wrong with him that laments dealing with a hospital structure that won’t let him leave on his own and a government that has no new ideas, the film is a great portrait of a life where all you can do is smoke, drink coffee, and while away the days with CSI: NY reruns.

The film might seem truncated, but it’s purposely set up that way. Playing the Fool doesn’t come with many frills, but it has a great story and personality to spare. (Andrew Parker)

Finally everyone’s favorite psychotic rapist cannibal with a freezer full of souvenirs gets his own movie. Thankfully, Thompson doesn’t get lost in Jeffrey Dahmer sensationalism, instead creating a unique portrait of “Jeff” through three people he permanently scarred. He interviews the detective who coaxed out Dahmer’s confession, the medical examiner who sifted through the human remains, and a neighbor who forged a tenuous friendship with the serial killer before his arrest.

Deliberately mundane footage of an actor playing Dahmer is intercut throughout, showing how his outwardly normal and even boring behavior was easily ignored at the time. Its pretty disturbing stuff, with all the grisly details of the crimes only revealed through anecdotes and crime scene photos. Thompson’s slow-burn peppering of information is deeply unsettling, and his examination of three scarred minds that Dahmer left behind is far more affecting than any attempt to empathize with the killer would have been. Walking home through quiet back allies after the screening is not recommended. (Phil Brown)

Screens with: The Fortune in the Throat (20 minutes)

Recommended: Not really, unless you really want to look into the film’s subject and you don’t already know about her.

One of the first and foremost Canadian literary celebrities and playwrights of the early 20th century, Jalna writer de la Roche struggled for most of her life to maintain a high degree of privacy from the press and outside world for herself, her closest companion and technically adopted sister, and their two adopted children.

The mystery isn’t as deep as the title would suggest, but Gallus blends dramatic recreations and interviews to create a rudimentary introduction to students or novices wanting to learn literary theory and how to look for subtext. Voracious readers, historians, and those interested in gender studies will get the most mileage here. (Andrew Parker) 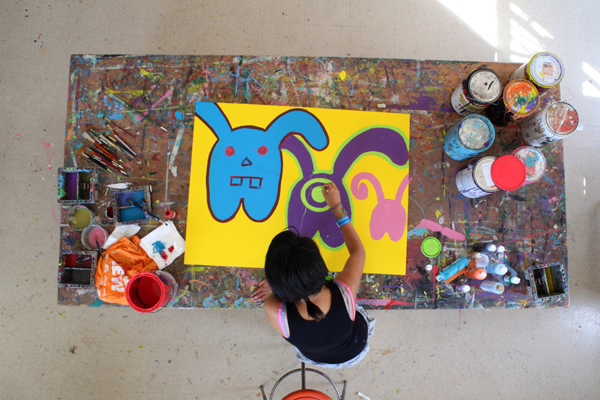 Proof that great things come in small packages, this uplifting and unforced tearjerker paints the picture of the 15-year old homeless, undocumented title girl from San Diego as she finds herself on the verge of becoming a serious artist and she begins preparing 30 new pieces over three months for her first ever gallery show.

The titular girl not only creates gorgeous works of art, but the Fines’ use an almost appropriately flashy style befitting of their young subject. The confessional moments from Inocente about her strained relationship to her mother also serves as an awe-inspiring document showing that sometimes the happiest and brightest art comes from the darkest places imaginable. (Andrew Parker)

The story of a man learning who his estranged father was and the details surrounding his gruesome murder balances its voyeuristic and sentimental tendencies in a uniquely European way. As touching as it is shocking, the film benefits greatly from the father’s predisposition to self-documentation, leaving behind a plethora of photographs, home movies, and audio diaries recorded as he tried to attain his ‘great liberty’, sexual and otherwise.

While most people would probably try to distance themselves as much as possible from such events within their family, Ehnemark has done the opposite by delving into everything from his father’s personal effects to the official police file and even re-visiting the scene of the crime. While the voyeuristic nature of the story is obvious (did I mention the father was murdered with garden shears by a young gay lover in the presence of the lover’s incestual mother?), the sentimental parts come when Ehnemark is hearing about his father from those who really loved him. Further proof of something I’ve often said: good things come from Sweden. (Noah Taylor)

Francophrenia (Or: Don’t Kill Me, I Know Where the Baby Is)

Recommended?: Only if you are the biggest masochist on the face of the f**king planet

A film of such reckless ego with staggeringly pretentious amounts of banality and pesudointellectual twaddle, actor James Franco’s look at returning to TV soap General Hospital for a one off episode filled me with such anger, hatred, and rage that I nearly broke my foot kicking a bike post after watching it.

Mistaking long takes for art, silence and pointless low end rumbling for insight, and basically telling everyone who ever supported him to fuck off, the film starts dull and becomes more insipid with every passing second. The material dismisses itself as a joke that only Franco himself will get and he wants the audience to admire him for that.

Franco seems to want a pat on the back or a hug simply for “getting” the joke about celebrity and his role in pop culture as a grad student who does anything for the fun of it, but his chronic shit eating grin kills any potential “joke” this movie would have been. He goes so meta that he loops back on himself making him look like an insufferable asshole in any form of reality. Hopefully since this movie is patently unreleasable, I will never have to talk about this piece of shit ever again. This isn’t film, commentary, or art. This is a masturbatory piece and one of the biggest wastes of time in my life.