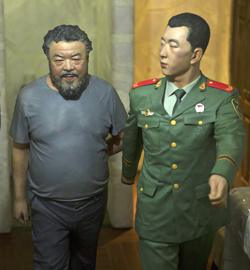 Our first batch of reviews for Hot Docs 2012 are in! Today we have a look at opening night film Ai Weiwei: Never Sorry, The Invisible War, Wildness, Smoke Traders, Playing the Fool, Jeff, The Mystery of Mazo de la Roche, Inocente, The Great Liberty, and James Franco's Francophrenia (Or: Don't Kill Me, I Know Where the Baby Is).