I am not the first to point out the similarities between House of Cards‘ central protagonists, Claire and Frank Underwood, and the Shakespearean power couple of Macbeth. Claire Underwood as Lady Macbeth: a woman seduced by the prospect of her husband’s rise to power, her unrelenting homicidal tendencies, and her erotic imagination. However, this is where her likeness to the Dark Lady ends for Shakespeare’s character was overcome with guilt and sleeplessness and succumbed to her suicidal thoughts. In season three of Netflix’s House of Cards, we see Claire in a moment of weakness as blood runs from her veins, she tells Tom her self-harming fantasies of jumping off a bridge; however, Claire does not take the route of self-slaughter, but instead she’s left her beloved Francis and is going to make it on her own.

Not that her now estranged husband doesn’t have anything to say about it, and this is the crux on which season four of House of Cards relies on: in lieu of a husband and wife working together in Machiavellian marital bliss, they are on the road to a head-to-head battle.

Shakespeare is still in the mix though. We hear the quote in this very first episode of the new season, “Something is rotten in Denmark” a literary reference to Hamlet, another one of ol’ Willy’s bloody plays.

For those who may not be familiar with the theatrical bitch-fest/murder spree, Hamlet goes fucking crazy and kills everyone he ever loved or was remotely close to after the death of his father. One wonders if Francis Underwood may succumb to the same melancholy and reckless stabbing when the mortality of his dream of absolute power comes under threat. 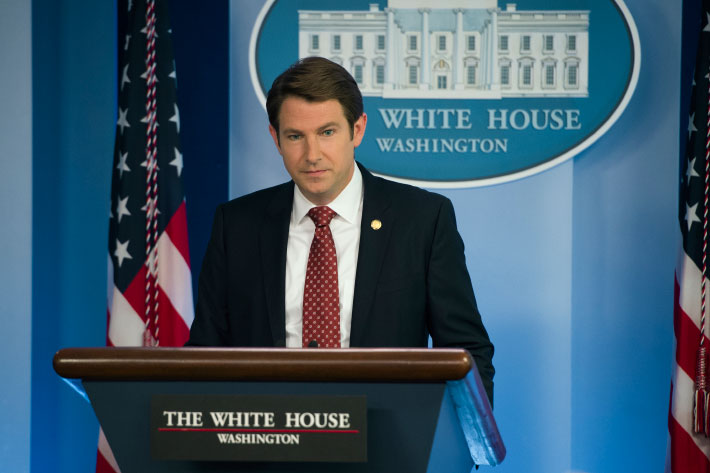 Frank isn’t doing as well with the words. He yells at Doug because his New Hampshire speech isn’t written out phonetically, and how will he talk good now? Obviously, he’s just pissed because Claire’s leaving his ass and is down in Texas, he can’t control her anymore , and Frank has to go to New Hampshire alone. His speech at Hooper Industries is spliced between the live thing and his rehearsal of it aboard Air Force One. In the editing process, he strikes out the mention of his wife and we hear his logo: Live Free Or Die.

Claire returns to her sparsely decorated and expansive childhood home. White sheets cover the furniture giving the abode a ghostly vibe. As though an apparition himself, a tall thin man appears to Claire and informs her that he mother is sleeping. But Elizabeth (played by Ellen Burstyn) is wide-awake and wears a regal expression of “We are not amused” when confronted by her daughter’s homecoming.

We see that Lucas’ bedtime stories weren’t just for fun, but were a way to get his fellow prisoner to admit he was taking the fall for the head of Armenian white power in L.A. This is Lucas’ ticket outta the big house, and he enters Witness Protection. “It isn’t much” his parole officer tells him before giving him a tour of what, for a poor writer like me, is a pretty nice place. But it doesn’t have Internet and he can never ever make friends, so I suppose one man’s palace is another man’s prison. 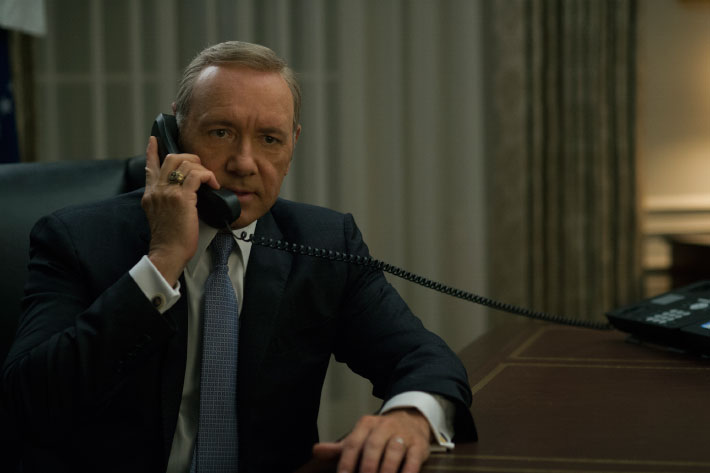 Frank just wants someone to be there in the room with him so he can fall asleep and into a dream where he is both touching Claire’s face lovingly and beating the shit of her/having the shit beat of him. I WONDER WHAT IT MEANS?!

Claire’s got her lily white behind in gear to take the 30th seat in Texas. She hires a consultant Leann Harvey (Neve Campbell) to take the position from one Celia Jones, a black Texan who’s been waiting a decade for a position. Because, you know Claire deserves it right? But Frank’s not going to allow this and sends his favourite son Doug Stamper to run interference.

After her meeting with mom and daughter Jones’ and (quite rightly) being told she has no business representing the good people of Texas, Leann gets a visit from Doug in office whom she greets with a gun (this is Texas after all.) Frank’s on the phone and his message for her to fuck off is clear.

Doug may not like Leann, and is there as a threatening presence, but sure thinks her gun is cute.

Don’t Take No For An Answer

Frank makes his way to Texas and greets Elizabeth on the stairs. The context of the relationship can be summed up by the first words he says to her, “I wish I didn’t have to be here.” But he is there, and there’s a face-off: Team Claire/Leann vs. Frank/Doug. To cover up any rumours of a marital rift, Frank essentially orders Claire to tell the press that she’s in Texas because her mother has cancer—information Claire did not know.

“Let’s get this over with.” — Claire Underwood

We get a shot of her worried face as Frank pontificates his typical garbage.

Claire orders the thin/ghost man to unlock her mother’s bedroom door and sees her mother—hairless from the chemotherapy—and is finally confronted with the realities of her illness. Claire cries. “Is that for me, or is that for yourself?” asks Elizabeth. Can we not say that Claire’s coldness is perhaps hereditary?

Mother and daughter embrace, and Elizabeth asserts what Claire needs to defeat her husbememy, “You have to be stronger than him.”

The table has been set, and players old and new keep their hands tight to their chests. There are eleven more episodes to go, and now’s the time to get your binge pants on, throw your morals out the window, and brace yourself for the war of the Underwoods.

If Looks Could Kill – Frank’s hair has grayed and his stomach has grown — a testament that time is a cruel mistress and ravages us all. But not for Claire, at least not yet. While her husband’s face lines become deeper and his voice turns into a growl, Claire is as composed as ever. A fifty something woman who can still wear fitted dresses with a cardigan that creates a diamond shape at the nape of her neck is a woman who will go straight for the jugular.

Daddy Issues – Frank’s had his fun in the past with pitting Seth and Doug against each other, but this might not be moving so much towards a Cane and Abel dynamic, as much as an overworked and under appreciated Seth slipping into a Judas role. He’s approached by Dunbar’s right hand woman Cynthia and is given an offer he can’t refuse: leak information to Dunbar and be ensured a position when Dunbar wins. And if she doesn’t win, then you know, he can still volley for Frank’s affection.

New Kids On The Block — In the periphery, we are introduced to some cat named Conway, a new candidate. He’s handsome, charismatic, and has a beautiful supportive wife. Perhaps the Conways might be the younger version of the Underwoods?