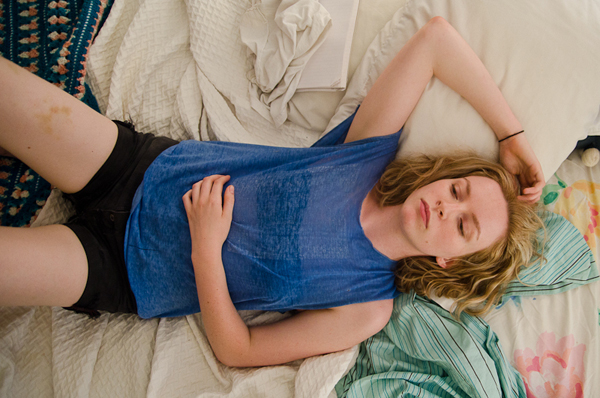 Matthew Porterfield’s American indie drama I Used to Be Darker focuses intently enough on the effects of outside stress on a failing marriage, but far too much energy is being expended on the strain Porterfield is placing upon his own narrative. Not quite content to simply be a character study, Porterfield finds himself shoehorning too many disparate elements that he fixates upon into too small of a space. It wants to be grounded and grand at the same time, settling for an unfortunately predictable middle ground.

Scared, somewhat alone in the world, and pregnant, young Taryn (Deragh Campbell) makes her way from Northern Ireland to the Ocean City, Maryland home of her aunt Kim (Kim Taylor). Arriving unannounced, Taryn doesn’t know that she is arriving just as Kim is in the beginning stages of a particularly nasty divorce with her husband, Bill (Ned Oldham). Both of them musicians, Kim has been more productive as of late artistically and emotionally, while Bill feels frustrated by having to constantly hold down a day job while Kim’s out living her life. Between the three of them lies Abby (Hannah Gross), a daughter caught in the middle who feels some sympathy towards Bill, wants nothing to do with her mother whatsoever, and who sometimes finds Taryn hard to peg down.

Every time Porterfield (Hamilton, Putty Hill) adds a new element to his story, the narrative stops being about people and more about structure, often fixating on details that don’t add very much for quite some time. The malaise of Taryn’s situation seems to get lost around the halfway point in favour of focusing on everyone else. The very reason why she’s there and the tension she creates only gets brought up later on as a means to an end, and a somewhat predictable one at that. At times he flirts with making his narrative into a sort of miserablist version of Once (with great songs from real life musicians Oldham and Taylor, and with the latter getting a wonderful, mournful torch song towards the end), but even that can’t be sustained for too long. In a few brief moments, the film seems like it wants to take cues from Abby, content to simply move about like a free spirit, but sequences designed to show spontaneity are out of place (especially a head scratching scene where Taryn and Abby break into a theatre so the latter can deliver a monologue for no reason than a forwarding of a malformed artistic vision).

It’s all maddening to keep up with, but not without artistic merit. It’s not much to look at in terms of technical acumen and the narrative flails about wildly like a fish plucked from the water and plopped onto a deck in the summer sun, but at least Porterfield knows exactly what beats he wants to hit. There’s a conviction to his work and the performances being given by the cast that carry the film quite a ways. Particularly interesting and touching to note are the similarities between Kim and Taryn and those between Bill and his own daughter. If the film had continued on and explored these dynamics more indepth, perhaps this film could still be saved. In its current misshapen form, however, it’s kind of a mess that ends just as it begins to head somewhere interesting and daring.