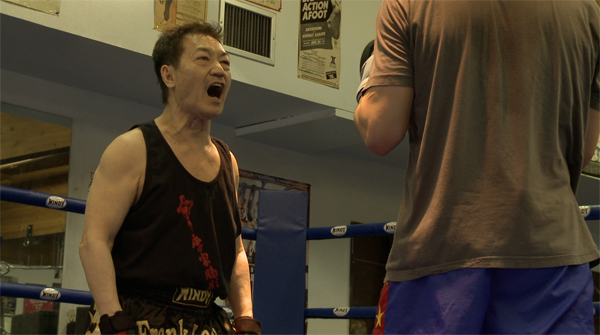 It’s hard being the son or daughter of any notable figure when you try and focus on following in the footsteps of a famous parent. The expectations start to become unreasonable and hard to deal with. On the other hand, sometimes it’s hard to be the offspring of a larger than life figure because they’re never around to be that much of a parent. Filmmaker Corey Lee falls into the latter category as evidenced in his film Legend of a Warrior (premiering Monday evening at Hot Docs), where he attempts to connect with the side of his father he never knew.

Corey’s father is legendary martial arts master and trainer Frank Lee, a man who Black Belt Magazine once bestowed the title of “the father of kickboxing in North America.” A master in White Crane Kung-Fu and a student of various styles of hand to hand combat from wrestling to boxing to Muay Thai, Frank’s services have been in demand since the 1960s, training countless Hong Kong action stars through the years and even several current MMA fighters and champions. Even at his advanced age, Frank still travels as much as he did when Corey was younger, operating predominantly out of his Edmonton, Alberta based gym.

In an effort to make peace with his own feelings of distance and to give his own son some insight into who his grandfather is, Corey took up his camera and began travelling and training with his father to spend more time with him than they had previously spent together in nearly 20 years.

Dork Shelf sat down with Corey and Frank while in Toronto to promote the film in advance of its world premiere to talk about the filming process, physical training, and how their relationship has strengthened today.

Dork Shelf: Making the decision to make a movie about your relationship to your father is a really personal one that probably didn’t happen overnight. How long did you think about this idea before you actually got around to making the film?

Corey Lee: I think not unlike a lot of artists my own issues and relationship with my dad – actually, both of my parents – was something I had in some small way approached in my other films, but probably not as successful for me.

The real trigger for me was when I got married and my wife and I decided to have a family. I have two boys now that are five and three. When my first son was born, I really wanted to re-examine the relationship I had with my dad, and I think that was the real catalyst to say that I should approach this in a way that this is really honest and not dramatic. I’m not writing characters that are based on my father. I’m dealing with him myself, and previously all my experiences had been in dramatic filmmaking. What’s more challenging than trying to take on something that you’ve never done before in more ways that one? That’s where it kind of came together, and it’s been kind of a long road from there to here.

DS: Now when Corey showed up at your gym did you know he was going to make the film or was it a surprise when he showed up?

Frank Lee: He had mentioned it quite a while before that. Finally in about 2007 or 2008 when I had four fighters there involved with MMA, he thought it would be a good idea to come up with a camera and film that and follow me into the fight and stop it there. I said “Sure, if we have time, that’s fine with me.” That’s how it really started.

CL: That was the initial proposal that I was creating to pitch the film to the National Film Board. Those two and a half days that I hung out with you and just followed you with a camera and a lav mic was probably the longest time we had spent together in 20 some years.

FL: Since he moved to Calgary for school, it was the most time we had spent together.

DS: I guess it’s nice when you go to pitch an idea like this to have a hook to it when it’s just a simple story like this.

CL: Well, I know a film about a kid making a film about a parent isn’t that original, but my dad’s history and legacy in the martial arts kind of made it a no brainer. And I have so many memories of that gym, and not just the one that he has now and he’s had for 30 years, but all of these other gyms and all the other characters that have flowed through my life and his life and all these things that I connected to was in my veins even though I’m not really a fighter.

DS: Was it always your intention to come back and start training with your father again as a means of bonding?

CL: I didn’t know of another way. You know, martial arts is about movement. It didn’t make much sense to me to try and get to know this master who just happens to be my father by sitting in coffee shops or just walking down memory lane. To get to know him, I think I needed to be that vehicle for the audience. I’m that car that the audience is getting in and driving. I’m filtering his world through my eyes.

The toughest part was having to let go of the past. All that water that was under the bridge between me and him and my relationship with my mother and my sister. It had to be fresh. It was going to be this 40-something guy and his dad at the gym with him training me. It was really simple I think to let that just work and not let that be corrupted.

DS: And what were your thoughts when Corey said he was coming to train with you again? Did you think he was taking on too much by trying to train and make the film at the same time?

FL: I never really gave it a thought because I really don’t know that much about being a filmmaker. I told him that if he had an idea and he wanted to make it, he could do whatever he wanted. I mean, I’m a very busy man, but I always told him it was never a problem for me. I gave him 100% support and he started.

CL: It probably helped that I was a better filmmaker than I was at kung-fu.

You see, there are three levels to martial arts. The first level is where you focus on health, which is what the martial arts was mostly all about. Then there’s the second level where you go out and do performance. That’s like Jet Li, Jackie Chan. Those guys are performers. That third level, which is very hard, is the fighter. Not just anyone can do that. It takes a special person and that heart of a warrior, that heart that I have, that can go out there and get hit every time. It’s very, very hard to do. That’s why there are so few greats. Look at Muhammad Ali in boxing. He’s the best boxer of all time, but they have that rule where they can’t hit below the belt. In martial arts, it would be a fair fight, but he still had that warrior instinct where if it was straight boxing match, it would be no contest who would win.

DS: Do you ever wonder or think about the film bringing new interest into your gym and your teachings?

FL: Sort of, but not really, because my name is already established. I hate to say that, but my name is really famous all over North America, especially in my town. I’ve been teaching every year since 1966 in about half of the world, year round, doing the fighting and performance or seminars all throughout my younger days. So when I see a film and it’s about me, I know it’s not about Michael Jackson. I’m getting old now. I can’t perform like the old days. I know my son was the expert on that. I never thought the film would make me any more famous because I had already done some work with Sammo Hung and those guys. That’s why he got into this story. He wanted to find out the real me, and there was some things he didn’t know, so we started travelling together. He made my life story and when I saw the story and I saw myself in a natural life, I was really touched. I didn’t expect that.

CL: Well, what he said to me was something to the effect that it was more than a documentary. It was a movie with a lot of heart. That made me feel proud of what we accomplished. But then again, that film wouldn’t have been what it is if you hadn’t approached it honestly. Your level of comfort and your ability to be yourself in front of the camera and our relationship was crucial.

DS: And I can imagine that it would be easy for you to sort of open up since you have already had that sort of public life already.

FL: Yeah. That’s why I was so touched when I saw the film. In 1976 or 78 the National Film Board made a half hour documentary about me teaching martial arts that represents Chinese culture in the Museum of Man.

CL: And those snippets that you see are from that.

FL: And back then the White Crane style looked different. You know how the kung fu was with those ancient animal styles? It was beautiful, but you wanted to use it to defend and it could be deadly.

DS: Were you at all surprised when you were putting this together that you found you knew more about your father than you originally suspected or remembered? Do you think that there was just the great deal of distance that was causing a sense of distortion?

CL: I think that’s fair to say. It’s so funny because it’s not about a grudge or anything. We just settles into this cycle of “You should call me / No, you should call me.”  I don’t think either of us would necessarily admit to that, but we both get so caught up in our own lives. I was talking to my kids and I wanted them to know about him. I know he’s in amazing health, but I blink and ten years go by. I want to know who this man is and I want to bridge that gap that exists. Not just for me, but for my kids. And yeah, I do think I remembered a lot that I didn’t before, but there was definitely some stuff that I didn’t get out of him before, and the biggest was that he never wanted me to follow in his footsteps, which I’m sure he said before when I was a kid, but also that he was already seeing me as an adult. I just placed myself as a boy in his world. I think that was the biggest thing.

DS: Do you ever think that you could get caught up in your work the same way your father did or is that something you’re more cognizant of now?

CL: I would like to think that. (laughs) I would like to believe that I am, but I think some days you’re more present and some days you aren’t. Even with my father because we finished this film right before we had to submit to the festival, so my commitment to training with him hasn’t fallen off, but it’s definitely slid off. I certainly want to make more time to make more trips out there whether it’s by myself or with my family to hang out with him.