Artist Jorge Corona rose fast in the comics world, jumping feet-first out of a Masters in Fine Arts from the Savannah College of Art and Design and into big-name titles like Teen Titans Go! and We Are Robin, and creator-owned titles Feathers and Goners. Now he’s got the trophies to show for it. Corona received the Russ Manning Promising Newcomer Award at last month’s Eisner Awards, sharing the title along with Moon Knight artist Greg Smallwood. Corona spoke with Dork Shelf about his big win, Goners and his life as an artist in Venezuela. 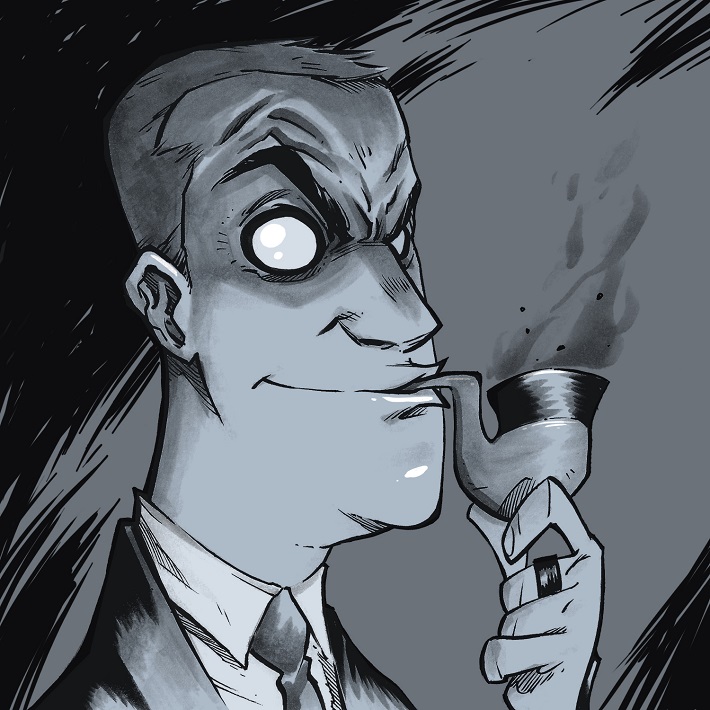 Dork Shelf: Tell me a bit about how Goners got started. You mentioned that Jacob [Semahn, writer of Goners] came up with the idea, so how did you get involved?

Jorge Corona: As far as I know, Jake has had this idea for a long time; this was kind of his baby. It was a story that he wanted to do and to work on for a while now – I think a few years. So he had this idea, and then I met him in 2012 at New York Comic Con. I went to the Man of Action booth – at the time he was working with them – I showed him my portfolio, and when he saw my portfolio he was like, “Hey I have this story,” and I think he liked my style for the idea he had for Goners. That was called Vladimir, back then … I loved the story as soon as I read it, and I was on board to do the art.

I was still going to college, so I had a class where I had to do 20-something pages by the end of the quarter, so I was like, “Hey I’m just starting this studio class, I can definitely work on the first issue for the class.” That’s how I ended up working on the first issue; that’s why I ended up doing pencils and inks at the time, because it was basically as a school assignment that I started working on. Then it was a year after that Jake actually got in front of Image – that’s how it got picked up.

DS: How is it different, working on a big-name comic like Teen Titans Go!, versus working on your creative-owned titles Feathers and Goners?

JC: It was insane! Last year was like having multiple personalities. For Teen Titans Go!, my style had to obviously match the style of the show. It’s a property and based on a cartoon, it’s not my interpretation of it, it’s characters that are there and have a specific style. The voice and tone of Teen Titans was completely different from Goners, which was a horror-adventure type of comic, and then I had Feathers, that was a dark fantasy type of comic. So it was like three different languages. I think Feathers and Goners are close in style, but even the tone of the books were different. So it was like switching back and forth between different mindsets for each book. But it was fun! I worked as an illustrator before starting  on comics, so it was always matching the illustration style for the client. I always work in that sense of trying to match the style of the illustration or the voice of the product. It was fun.

DS: So what got you interested in that scribbly, hyper-stylized type of art?

JC: When I was a kid, my main influences came from animation. There’s not a big comic scene here in Venezuela, besides the funny pages in the newspaper. There wasn’t a comic scene here, or market, even. So it wasn’t until later on – I think it was around the time Batman: The Animated Series came out – I was on a family trip … and I was in a supermarket or grocery store or something, and they had the rack with the magazines and comics and I saw Batman comics, and I was like, “Hey, this is the cartoon that I love.” That’s how I got into comics. So my first contact with comic book characters was from animation, and that usually tends to be a little bit more stylized. I’m a huge animation fan, so I think that’s where a lot of influence comes from.

DS: I know a big part of the industry is going to cons and meeting with editors. Is it difficult, being in Venezuela and working with American companies and American titles?

JC: It was difficult to make that first contact. Since everything is done online now – you scan your pages and send them to a server and that’s it – that part is not that hard. I do try to go to at least one time every year, for a couple months or a month, to the States and go to a couple of conventions and meet with writers and editors and friends there, keeping contact with people. Most of the people I’m working with I met when I was at SCAD, so it was a lot of editors I met through SCAD or by going to conventions while I was still in the States.

DS: You mentioned there isn’t a huge comics scene in Venezuela. Do you guys have comic shops and conventions that you can go to?

JC: There’s starting to be more conventions. I got invited to the Caracas Comic Con last year, and that was my first time there. There’s been a couple of anime expos here. There are not really comic book shops, but usually in these conventions or expos they tend to bring people who buy comics and stuff like that. There’s a lot of fan base for that, but not really the medium. You can see that now, because of movies, because of the major exposure that comics are having in the media right now, you’re starting to see in libraries and bookstores, they bring graphic novels, but nothing specialized. You get a bit, but nothing too, too big. Because of movies, because of media and because of TV and all that, it’s growing the fandom here. But like I said, the funny thing is that it’s never necessarily towards the comics, more toward the properties that came from comic books.

DS: Let’s talk a little bit about your Eisner. Of course that’s a huge, huge honour. What’s it like, knowing you graduated three years ago from Savannah and now you have an Eisner? That’s a really quick escalation.

JC: I’m still going through the… [Laughs] process of actually assimilating that. It’s insane. Never in a million years I thought I was actually going to end up working in this industry. It was a thing that I did as a hobby here, and ever since I graduated I’ve not only been working but, first the nomination, now the award. It’s been insane. I’m happy with just being able to work in this industry. The award is another level.

DS: In my opinion, one of the things that I think can grab you in a horror comic is its visuals, and I think you do a really good job in creating these interesting, creative monster designs. What was your thought when creating those designs, and behind creating a horror comic in general?

JC: That was kind of one of the first things that we got into when we were starting to work on Goners. Even though there’s a lot of gore and bloody messes, within the comic we wanted to treat it almost as a Goonies, or old Saturday morning cartoon kind of feel to it – bringing horror elements obviously, but also keeping it fun, keeping it an adventure type of feel … The characters and the acting and the design had to be enough that we could have those fun moments and those light moments, and also have room to go darker. And I think that was the balance that I tried to do with the monsters. I envisioned everything mostly trying to hit that spot … it wasn’t necessarily ink splatter everywhere, covering everything in shadows, because even though that’s awesome and that works, it wasn’t the tone that we wanted for the books. So it was something that was kind of creepy, but it was definitely something that you could see and see the design behind it. It was more of a old B movie, science fiction movie kind of monster design. You could almost see the guy dress up or wear makeup to look that way. So that was the intention for the monster designs, without making it look dumb. It was a good challenge, it was a lot of fun.

DS: Besides that kind of B movie design, what do you think makes Goners different from a lot of other horror comics like The Walking Dead or Chilling Tales of Sabrina?

JC: It was meant as an adventure comic with horror tones, not necessarily horror, gore or a crude depiction of horror. It was an adventure story, it was a family story, too. It was a relationship between these two siblings, but bringing in this whole other world. I was a huge fan, when I was growing up, of the old Johnny Quest cartoon. That cartoon had the same kind of family dynamic, but also brought in a lot of creepy moments with mummies and stuff like that. So more often than not, I found myself going back and thinking of what made that show scary for me, at the same time being an adventure cartoon.

DS: When you and Jacob were tossing around ideas and first creating Goners, what reaction were you hoping to get from audiences?

JC: [Laughs] Oh man, I had no idea. [Laughs] Goners was the first book that I worked on that wasn’t based on a property, so I didn’t know exactly what to expect. I hoped that they were going to have fun with the book, I hope that people got creeped out about some of the aspects of the book. But mostly that there was something that kept them hooked, that kept them entertained while reading the book. I didn’t want something that was too dull or too dark, I wanted that balance between having fun reading the comic and also without sacrificing the deeper peril that the characters face. I think that was something that the people that stuck with the comic enjoyed. It was exactly that aspect, it was that it was a fun story. That’s a lot of Jake and his idea for the book. Once I brought the visuals and we talked about the mood for the comic, he saw where the both of us could joke and make fun, and when we could go more serious or heartfelt or more dark with the story. So we had a very good dynamic.

DS: If you had the chance to work on one pre-existing book, which would it be?

JC: [Laughs] My obvious response would be Batman, because I freaking love Batman, ever since I was a kid. I’m doing We are Robin, so I’m as close as I can get. [Laughs] I always loved Deadman as a character, and I think there’s a lot behind that character, Deadman and the Spectre. Those are two of my favorite characters, once we take out Batman. Definitely something within that world would be a dream job to have. But I’ve been lucky, working within the Batman books, it was insane when I got the offer. I’m still dealing with that, in the sense that I’m working on a Batman book. That was a dream come true.