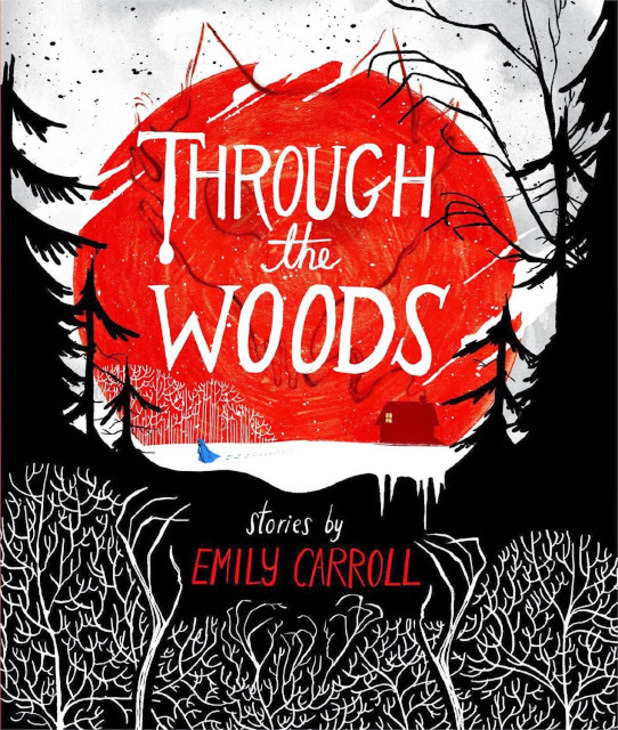 If you’re a Canadian indie comics fan, you’re undoubtedly familiar with Emily Carroll’s distinctive style. Simple line work belies the many layers in her storytelling, weaving fairy tale-esque stories that routinely turn to horror. That’s the case with Through the Woods, Carroll’s first standalone print work (available July 2014 and published by Simon & Schuster) after years of posting comics on her website. Through the Woods is a beautiful, well-paced read, with more than enough spine-chilling moments for readers 14 and up. Each story brings a new set of horrors to life, and will make you think twice about setting foot in the woods again.

We had a chance to chat with Carroll about the things that go bump in the night, and what it’s like to tell spooky stories to audiences of all ages.

DS: Can you describe your process putting Through the Woods together, and how/whether it varied from creating your other comics?

EC: I worked on the book story by story, even though I did have vague plans for each of the comics by the time I’d started (though plans might be too grandiose a word, as they were literally 1-3 sentence summaries at first). In a way it didn’t vary too much from how I normally go about making my web comics, aside from the fact that I spent more time on these, and that I was of course dealing with pages rather than the (potentially) endless sprawl of a website. And even that wasn’t too much of a shift, it was just another format to explore.

Process wise I begin with scripting and thumbnail sketches, which are done simultaneously, and from there I do just straight into final art. It really helps me to envision what the whole comic is going to feel like (let alone look like) as quickly as possible, just so I know what I’m capable of, skill wise, and what I need to adjust. So I usually did a page or two of finished (barring edits) art before I was even done sorting out the whole script. Things really firm up as I work; if I waited until my script was absolutely perfect before beginning, I would never, ever begin.

Medium wise, for this book, I used a nib (and sometimes a brush) for inking, along with drybrush ink work and a heavy dose of graphite powder, particularly in the later stories. In “The Nesting Place” I used ink for the characters but pencil and charcoal for their backgrounds. Everything is coloured on the computer though, and that is where I composite a lot of additional elements — my original “pages” are actually a lot of disparate elements that I cobble together once they’re scanned.

DS: What inspired you to write a collection of spooky stories using the woods as a theme?

EC: The woods theme only revealed itself in retrospect actually— dealing with so many fairy tales as inspiration, I end up setting the majority of my stories in one mysterious forest or another without even thinking about it. When I had finished the book and looking back on all the stories, it was the first title to spring to mind, until then the collection had just had a very temporary, generic title.

Spooky stories in general though have always held a fascination for me, and while I read all sorts of genres, when it comes to creating stories of my own I take a special satisfaction in getting a scary one just right.  I’ve been making creepy web comics for a few years now, and I suppose I just wanted to tackle the challenge of capturing a similar eeriness on the printed page too.

DS: What do you think are the key elements of a great scary story?

EC: For me it’s subtlety, ambiguity, and more often than not a generous helping of very earthly misery. I don’t like everything being resolved, I don’t like there ever being even the possibility of a solution really.

DS: Do you write what scares you, what you think will scare others, or both? Was any particular story scary enough it made it difficult for you to complete it?

EC: My own stories generally don’t scare me, just because I become so well acquainted with them that I lose that unknown quality that so much horror hinges on. I do often hang it all around a core emotion that I struggle with though, something that is easily accessible to most people (like guilt, envy, loneliness) and then use that as the backbone for whatever horror I create. So there have been stories that have made me pretty melancholy to work on, more than made me scared. My last webcomic, The Hole the Fox Did Make, was a little difficult because of this.

DS: While Through the Woods is labelled as ages 14+, the stories are more than frightening enough for adults (myself included). Do you have a particular age range in mind when writing?

EC: I don’t actually think about age much when I am creating my own stories — unless, in the case of some anthologies I’ve been in, the work is specifically geared towards kids (and the editors are usually looking for something that isn’t depressing or overly murderous).  My web comics and the stories in Through the Woods though, they are all stories I created just because they were stories I wanted to create, and I didn’t think about the age of the audience during said creation. I think kids could read them and get something out of them, and adults the same, but maybe different things depending on the person. Personally, when it comes to the book, it is something I would have read as a kid for sure, but every kid is different. I think if I did think of an age range at all when making it, even subconsciously, it was for my childhood self specifically.

I’ve done two comics expressly for children — “The Twelve Dancing Princesses,” in the anthology Fairy Tale Comics, and “Under the Floorboards” in the first Explorer collection.  To get a sense of my usual storytelling tastes though, I’d recommend going to my website and reading a few of the comics there. They are mostly horror.

DS: The stories in Through the Woods seem to take place in different eras but there is an overall timelessness to them all. Was that a conscious choice or simply how they came together?

EC: I chose different eras mostly so that each story would have a distinct style, and there wouldn’t be any confusion about whether they were linked/continuing stories or not. That, and — this is the dorky answer — because I have a fondness for drawing period costumes.

DS: I found “The Nesting Place” to be particularly spine-tingling. Do you have a favourite story or panel in this collection?

EC: I do actually! My favourite story is “A Lady’s Hands are Cold,” in part because it was so fun to work in that style, and in part because it came out looking exactly how I’d wanted it to look (which is rare). My favourite panels in the book are from that story as well — the wordless page where the main character sits down to eat with her new husband for the first time has a special place in my heart.