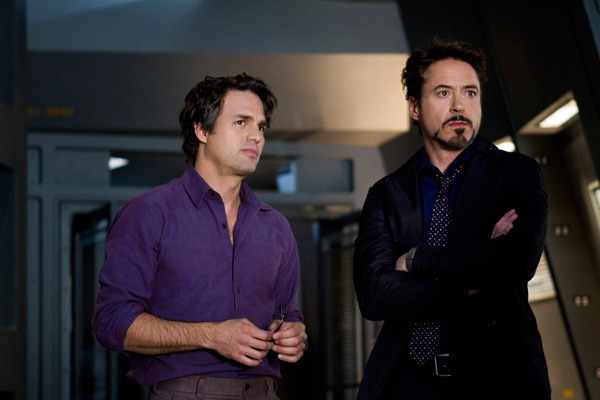 Although he’s probably best known for his roles in intricate character based ensemble pieces like Margaret, Zodiac, and Eternal Sunshine of the Spotless Mind, The Avengers marks a different kind of ensemble cast for actor Mark Ruffalo. Stepping into the role of Bruce Banner (once held by Eric Bana and Edward Norton across two moderately canonical films since the start of the cinematic superhero boom), Ruffalo dives headlong into blockbuster filmmaking for what will probably turn out to be the highest grossing film of his already esteemed career.

Joining the famed, illustrious dream team of superheroes from the Marvel Comics universe, Ruffalo plays the heart and soul behind the dangerous and volatile Incredible Hulk alongside Iron Man Tony Stark (Robert Downey Jr.), the demigod Thor (Chris Hemsworth), Captain America Steve Rogers (Chris Evans), and the agents of the secret government organization S.H.I.E.L.D. (Samuel L. Jackson, Scarlett Johansson, Jeremy Renner) as they band together to fight Thor’s fallen brother Loki (Tom Hiddleston) who seeks to use the power of an energy source known as the Tesseract to unleash a cosmic army bent on destroying the human race.

It might seem like a stretch for the classically trained actor, part-time screenwriter and director, and one fraught with sometimes impossible to please fanboy backlash, but Ruffalo approaches The Avengers with the same desire for variety in his work that’s driven his career up to this point. In a demeanor befitting of the role he plays in the film, he bounds into the room like a force of nature and talks proudly in the most animated of fashions about his first big foray into comic book action cinema.

Dork Shelf got a chance to sit down with Mark Ruffalo this afternoon to talk about working with fanboy icon Joss Whedon, his adventures in motion capture, and his feelings about film criticism.

DS: Does the dynamic change when you are working on something with this big of a budget and with this much franchise potential riding on it?

MR: I think it depends on your director, really, and Joss is really a small movie director. With him it’s all about character, and writing. It’s having everything sort of add up and not making too big of leaps from here to there. It’s all very well realized, and because of that it’s like a little indie movie, but with a lot bigger craft service and huge special effects. (laughs) But the stuff that he’s working with, all the dramatic stuff, it’s really easy. It’s all really relatable and very human, oddly enough. He really does humanize the characters. And he’s an actor’s director. You know, people wouldn’t necessarily think that about him, but I’ve worked with a lot of actor’s directors and he rates tops with me, as far as that goes.

What I loved about working with him was how much he had to say about Banner, and how he really understood his back story and some really cool places to go dramatically with him.

DS: The film is already getting great reviews across the board…

DS: I wondered how important that is to you having coming from a sometimes smaller background in film…

MR: Some of which haven’t been well reviewed.

DS: Now you are making a movie on this scale, how important is that to you?

MR: You know, for a long time that sort of thing was more important to me, but that was just heartbreaking, and it almost helped me lose sight of why I love doing this. A few years ago, I kind of promised myself that for me the experience of making the movie was what I was going to be how I judged the final product. I have so little control over the final product, but that being said, when someone read Peter Travers’ review of this movie to me out loud, I was just, like, “Okay. That’s dope.” (laughs) That feels nice, you know. I tell you, it makes doing this process a hell of a lot easier to be doing press for a movie where you come into a room where everyone likes it instead of trying to convince them for 20 minutes to like a movie that they hate, and sometimes you just can’t do it no matter how hard you try. You just can’t sell it. So it’s the icing on the cake when you have a good experience, but I’ve long forgotten hanging too much importance on it.

DS: You’re now playing the third Hulk in the Marvel franchise. What did you do to sort of differentiate your take on Hulk and Banner from the other films?

MR: Well, the only advantage that I had, really, was that the technology brought us to a place where the actor could actually play The Hulk. The other actors didn’t get to play The Hulk. We all got to play, Banner, though. We all worked really hard to make The Hulk feel real and make him seem like an actual human being getting pissed off. He’s tender, he’s funny. We worked really hard to make him human, and that’s ILM as much as it is me, or anything else, and Joss Whedon of course.

Joss and I talked a lot about that and I signed on before there was even a script, but we talked about what we both wanted to see. Whedon was incredibly sensitive to the fact that me and Cobie (Smulders) are really the only new additions that he brings to this game. So, he’s, like, “Buddy, I really want you to score. You’re the only thing I’m really adding to the mix here.” But we definitely saw this as a continuation of the past movies, and I loved those movies and I loved those actors. I thought they were great Banners.

This is just an older version of him, a more mature version. He’s been on the run longer. He’s gotten to a place where he’s ready to deal with this and face it, and he has an almost ironic sense of humour about the situation he finds himself in. All of those things we’re just a continuation of where we last saw him, and the idea that maybe I could control this thing. Maybe I finally have some sense of control over it. But, you know, we were really going back to Bixby’s Hulk with Banner who really had this kind of world weary charm about him where he was trying to live his life even though he’s on the run. We really wanted to engage in that life and that’s what we were always going for.

DS: Throughout the film we actually get to see a lot of Bruce, which is nice. Did you have any favourite scenes with the other cast?

MR: My favourite scenes were generally the ones where I get to talk to people. (laughs) Or, you know, get to do some acting in them. It was just thrilling to see all those people assembled together. But for me that introductory scene with Bruce is so cool. It’s such a cool bridge from the past to here. And I really loved the scenes with Robert Downey Jr. As far as acting, those are exciting and fun and you never know what you’re going to get from him. Their relationship is really a cool one.

But then, you know, the stuff with The Hulk is just dope. Getting to do all that stuff. I have a little rubber version of people that I get to fling back and forth. But the one improvised moment that I had was my first day on set in my Chinese Checkerboard, man cancelling leotard, and it’s when I grab Downey while he’s falling and I have to throw him off. So we’re shooting and I’m just standing over his body and I just get up and I just ROARED, Which wasn’t scripted, (laughs) and Downey just opens his eyes and was like, “Really?” That was my first day on set and my sphincter muscle just clamped up. Yeah, that was pretty much it. (laughs)

DS: How did you find working in all those motion capture suits as The Hulk. Is that footage that you hope never gets out?

MR: My closest moment of turning into The Hulk in the whole movie was when they were rolling B-Camera on me and I was in that thing, and I was hot and sweaty and totally embarrassed and all the places that you want to look big look small and all of the places you want to look small look big, and I was just, like, “TURN THAT FUCKING THING OFF!” (laughs) “I’m sorry… I’m sorry. I don’t want to be rude. I don’t usually get angry, but there IS something called MOVIE MAGIC that HAS to be MAINTAINED HERE! Let’s keep the mystery alive!” (pauses, drolly) So yeah, it’s not my favourite thing.

DS: This is your first real foray not just into comic book films, but also to big scale action. Did you develop any sort of a taste for that kind of film or is it something you would prefer only coming back to every once in a while?

MR: Honestly, I don’t have a plan. The big misconception about actors is that we actually get to choose the things we do. It was fun and I really liked this, and I just got done doing a movie with Louis Leterrier – who did the last Hulk movie – which had a lot of action in it, which was a lot of fun for me. I’m getting to the place in life where I’m almost too old for it, but I still have a lot of fun doing it. I don’t know, it’s just kind of about going along with the program a little bit, and if something interests me and I decide to go there I do. I don’t really know why something interests me sometimes in the moment it does, but that’s been the deciding factor in what I do.

DS: And when you sign up for one of these movies, don’t you have to sign up for about six movies?

MR: Yeah, and they WANTED nine!

DS: Really? Was there any trepidation about that?

MR: Yeah, but once I sat down and I did the math, I knew that they had another Thor, then another Captain America, and another Iron Man, and they’ll probably do another Avengers at some point. It takes two years to make a movie and I signed on for six. It will probably take three years for each one that I’m in. (pauses) Are they really going to want a 70-year old Hulk? (laughs) So they’ll probably get three out of me before they get tired of me. I’m down with that ride. That can be fun.

DS: If you had to trade places with any other character or actor in the movie to play a different hero, who would it be?

MR: Um… Black Widow. (laughs) Can I be a woman? Seriously, everything that Scarlett (Johansson) did, all the physical stuff and all the hand to hand combat. That was just awesome. I would have loved to do that. Other that that? Loki, because really, that’s just SUCH a great fucking character.