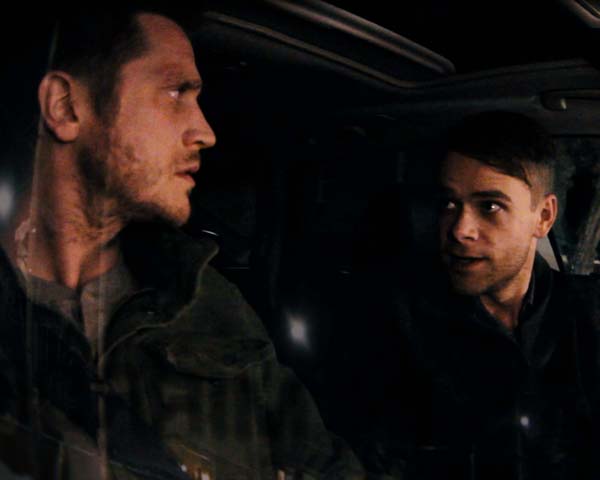 Voyeurs and paranoid folks alike can join forces to take delight in being disturbed by the new Canadian thriller 388 Arletta Avenue this Friday. Nick Stahl stars as James, a white collar suburban type who along with his wife is targeted by a deeply twisted new millennium stalker. The unseen stalker places hidden cameras throughout the Stahl family residence to capture every moment of his twisted mind game. At first he essentially pranks the couple with mysterious CDs and computer tampering, but quickly things to turn personal and possibly even fatal.

The film comes from burgeoning Canadian filmmaker Randall Cole who previously made the Jay Baruchel/Randy Quaid starring Real Time and was produced by national genre stalwart Vincenzo Natali (who was responsible for directing Cube and Splice). We got a chance to chat with the minds behind this new twisted little genre movie about its comedic origins, unique production, and disturbingly contemporary themes. Read on only if you’re absolutely positive if no one is looking over your shoulder. Even then, there’s nothing too bad here. You just shouldn’t have anyone leering at you right now if you can avoid it.

Dork Shelf: Where did this idea originate, I heard it was originally a comedy?

Randall Cole: Well, on some level, certainly to the person making it, this may still be a comedy, just a very dark one. But yeah, when I initially conceived of the idea it was just as simple as someone messing with someone else and that person having a dark past, so they can’t figure out who is doing it to them. Then it could be played as a comedy with this guy learning a lesson about himself vis-à-vis this person then getting back at him or not. It kind of got put into a drawer because I wasn’t entirely sure what to do with it. I thought it was interesting, but not enough for a feature.

Then some personal stuff happened about five or six years ago around our home. We had five or six flat tires in a couple of months and I had never had one in my life before. Then we had some weird stuff happen with our computer. It was hard to understand. The CD thing actually happened to me. I started the car I didn’t remember making the CD and my wife didn’t either. We also got a piece of mail saying, “You’ll find out soon” on a post card. It kind of petered out, but we were very nervous at the time. You just get paranoid knowing that someone is messing with you. It reminded me of that old idea because when things like that are happening to you, you kind of have to wonder who is responsible. And then that lead into the idea of how this person could get maximum pleasure out of it, which would be to see it and film it. So that’s when I knew it was a different idea and wasn’t funny, at least to the people that it was happening too.

DS: At what point did you get involved, Vincenzo, and what sort of creative relationship did you share with Randall?

Vincenzo Natali: Well, it’s funny because my last movie was Splice had Guillermo Del Toro as an executive producer and his approach to it was basically, “I’m there if you need me and I’m staying out of the way if you don’t.” That was very much my approach to Arletta. I thought it was an amazing script and it’s 100% Randall’s film. I was just riding on his coattails, but hopefully in whatever small way I could, tried to help get the film made. It’s just such a compelling idea, I think and it was so well rendered on the page that it was very easy to put together. I didn’t know Randall before reading the script, that was our introduction to each other. It’s rare that I find something that compelling and I felt that even in light of what has become found footage movies, this movie remains very unique because most of those films are shot from the perspective of the victim and this film is shot from the perspective of the perpetrator. I think in that insidious way it makes the audience much more complicit in what’s happening to James. I just found that very chilling and in some ways very relevant to the times that we live in because we are a much more of voyeuristic culture than perhaps we were even ten years ago.

DS: Did you two ever even discuss a profile of motives for the stalker just for your own benefit or did try to keep it mysterious even to yourselves?

RC: Well, it’s hard to say too much about it. I had an idea of this nightmare vision of the person who was trying to get to me when all of that was going on. I just imagined that personality and someone reveling in it. I think in some ways it’s a person and in some ways it’s kind of representative of the darker side of our reality TV obsessed society as well. He’s an extreme version of that impulse, in a way.

DS: Was it difficult to determine how much is revealed about him? Because it really does remain tantalizingly ambiguous from beginning to end and that’s a difficult balance to find.

RC: I think you had to be true to the tape he was making. You see in some places he wants to assert his personality into it but obviously doesn’t want to give away who he is all together. I thought of him as the director of the movie. So, he’s like a sick Quentin Tarantino with all of the musical choices. He’s pretty twisted to begin with, but if you think of someone starting from there and then going off into an even darker place, that’s what we had in mind. The idea of playing pop songs to scare people I think is an extension of our pop culture right now to begin with. I see him as a psychotic extension of our own times. And I relate to it. I get both sides. I understand James’ side from my similar experience and I can understand the filmmaker’s side. I can understand doing the first 25 minutes of the movie. That might be fun, but then it goes much darker than that. Movies have to.

DS: What made you choose Nick Stahl to play James?

RC: Well, Nick was someone who I brought up early on, partly because of Bully. I wanted someone who could walk that line who can seem like they have a dark past while also feeling like a regular guy which he’s kind of grown into. I don’t know, something about that movie tweaked for me. With that image of him, you can always picture someone Nick plays as being a bad guy even when they seem innocent like the beginning of the movie. Then as we peel back the layers and put some pressure on him, you can see that he still has that Bully side to him.

DS: How did you choose where all the hidden cameras would go? Did that start to happen as early as the script?

RC: We kind of had to become the character. It was like method directing. Find a house that works and then me and the DP got to be the guy.

RC:  We’d just walk around thinking, “Where’s a psychotic going to put the camera and not get caught.” So you kind of had to think of that versus story logic and find a way to balance the two. Hopefully we managed to find that level where it still engages and yet hopefully the audience can go along with it without it seeming like too much of a stretch. In some ways, we talked about it like a micro-budget version of The Truman Show.

DS: Once you had those angles chosen were you able to shoot the film without touching them again?

RC: Well, we had about five cameras going at the same time. So we would do one room at a time. We were shooting a lot of material at the same time, but no more than five cameras at once. It would have gotten out of hand if we had to worry about all 16 or however many there are supposed to be at once.

DS: When you got into editing was it difficult to create suspense rhythms when you had a limited number of angles without any close ups and couldn’t really plot out the movie visually as you would in a conventional thriller?

RC: Well, you know editing is always tough. I think it was a matter of finding new ways to express that. Some of it was in sound design. When we put in the sound of the guy breathing, that added a lot. Some of it was just a matter of the tension being there as long as we could find a way of expressing the intentions behind it. That’s where it was going to come from rather than more conventional visual cues. We didn’t rely on a score or reaction shots in the same way, but it was nice to have places like in the car where we could get in a little tighter on the characters. We also tried to be very careful with blocking to get Nick close to the camera when we needed him to be. It was mostly a trial and error sort of thing.

VN: If I can add onto that, one of the things that I admire about the film and the way Randall directed it is that it’s very pure. There are no tricks being played like you normally see in this type of movie. If this guy made the movie and such a person existed and had access to this technology – which does exist – this is what the movie would look like. So the film doesn’t cheat. I think even in Paranormal Activity they put in music and this movie doesn’t even have that. It’s really of a piece and uncompromising and I think all the more chilling for that reason.

DS: How is your next movie Haunter coming along?

VN: We finished shooting about three weeks ago and we’re into the cut now. It’s been great. It’s one of those movies where the less you know about it going in the more you’ll enjoy it. So, I don’t want to say too much about it, but I will say that it’s unlike any haunted house film I’ve ever seen and that’s what drew me to Brian King’s script. I didn’t write it this time. It was written by a friend and I feel like he’s taken a lot of the things that we know and are familiar to that type film and turned it on its head. So, it’s been an exciting project to be involved with.