Whether drawing posters for the likes of The Mountain Goats, Best Coast, and Eisley or independent comics – most notably his celebrated appearance on issue 3 of Bitch Planet – Robert Wilson IV’s artwork stands out for its bold linework, absorbing expressions, and thoughtful compositions. Even in moments requiring more static staging, he always imbues his scenes with a sense of movement and curiosity about events to come.

On the upcoming Oni Press series Heartthrob, where he joins with Christopher Sebala on writing and Nick Filardi on colours, the dynamism that he brought to Knuckleheads and Like a Virus receives a funky retro polish. Set in the 1970s, this defibrillator of a story centers on Callie, a stagnant, depressed insurance claims adjuster who receives a life-saving heart transplant to fix a debilitating birth defect. She decides to make up for all the time spent afraid of enjoying herself by getting involved with the seductive, stylish con man Mercer.

Mercer also happens to be the previous owner of her not-so-shiny new heart.

Wilson IV spoke with us about his upcoming series, what he loves most about Bitch Planet‘s Penny Rolle, and the architecture and 20th century design elements that inform his work. 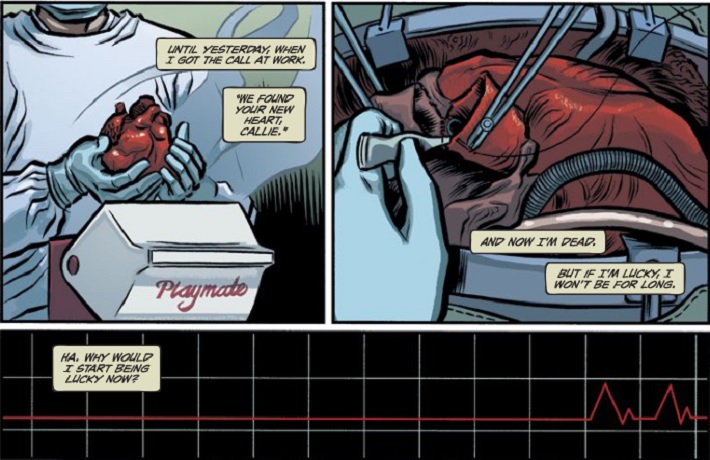 Dork Shelf: In the introduction to issue 1 of Heartthrob, the creative team mentions, “We’re not gritty and grimy, we’re not floofy pastel clouds, we’re sitting somewhere between the two.” Sometimes it seems like comics – and media in general – feels obligated to veer toward one approach or another. How do you maintain that balance and keep the story feeling fresh?

Robert Wilson IV: I can only speak to my contribution, but that is just a reflection of who I am, I think. I’m a pretty unreasonable optimist, but that doesn’t mean that I don’t see and feel the pain inherent in life. I don’t WANT to make “gritty” or “dark” stories. I just want to connect with people.

DS: So you prefer reading and creating characters with whom you – and others – can empathize? What qualities does that entail, to you?

RWIV: I think it comes down to the honesty of the creators. If the creators are being vulnerable themselves, people will connect with that. Sex Criminals is a really good example of that. I thought the book was really fun at the beginning, but as you saw more of Matt and Chip in the book, it became this other thing that is really honest and real and pretty amazing.

DS: The intro also mentioned that Heartthrob has been in the works for 3 years now. How, if at all, has the story evolved in the time between conception and acceptance for publication? Without spoiling us, naturally.

RWIV: The plot hasn’t really changed at all. I think that the tone has softened and hopefully deepened with my contribution, and with Chris and I’s friendship. I came on board Heartthrob about a year ago, so the idea has been around for a while without me, but we made it an actual thing together.

DS: And how much input were you given on the overall story development once you came on board?

RWIV: I have as much freedom as I want to take. Though I love the story so much, there really isn’t anything other than little storytelling decisions that I would change.

DS: What does the Heartthrob team’s creative and collaborative process look like?

RWIV: Chris and I are pretty close, we talk about plot and tone and the more technical side of making a story in comic form together. He writes the script totally independently, but I will kind of direct the book in terms of choosing camera shots and acting; sometimes I will combine panels or add an extra panel or what have you. It stays pretty conversational. Nick and I had a lot of back and forth about mood, and especially about how to handle Mercer, a main character who is ostensibly not there. Physically, at least.

DS: What sort of challenges did you face with Mercer early on? It’s obvious he can’t interact with anyone other than Callie, so how will you keep him an interesting and engaging presence as the story moves forward?

RWIV: I actually think that is one of the things that keeps the book super unique. I don’t want to get into it too much for spoiler reasons, but it becomes a part of the story that really moves things along.

DS: In your interview with Newsarama, you touched on your research into the 1970s aesthetic. The music clearly left quite an impact on you, what with the cover homaging Heroes and all, but your love of the classic Sears designs stands out! Have you seen Brandon Bird’s SearsZine yet?

RWIV: Haha! Oh man, I had no clue that existed. The Kickstarter looks fantastic.

DW: It’s glorious! What elements of ’70s design appeal to you most? Any other standouts besides Sears?

RWIV: Well, I love mid-century modern architecture and Brutalist architecture from the ’70s. Unfortunately, I haven’t had a ton of opportunity to incorporate that stuff. It’s an ongoing, though, so I’ve got some time.

DW: Switching gears a bit here to another story of non-compliant women… you’ve mentioned briefly how much you loved working on Bitch Planet‘s seminal Penny Rolle issue because you think so highly of the character. What about her do you personally find so compelling?

RWIV: I love Penny because she loves herself. It’s so easy to be insecure about who you are, no matter who you are, but especially when you are a person that society identifies as being less than. But the truth is that we are all valuable, and we choose who we are regardless and, sometimes, in spite of societal ideas of worth. I wish I was more like Penny. I see Callie as being more like me: a little less confident, trying to decide who she wants to be and how to become that person.

DW: There’s also a heavy ’70s influence on Bitch Planet, particularly pulling inspiration from exploitation films. Did your research for both “retro” series have any especially fascinating overlaps? If so, what were they?

RWIV: I started to, but then I got the script and it was markedly less influenced by the exploitation genres than the rest of the series. For me, it was about being empathetic with Penny, finding ways to put myself in the shoes of someone so drastically different from myself in both their life and privilege. As a comic artist, you are an actor, so I tried my best to understand Penny so that I could be her on the page like an actor would become a character on stage.

DW: Fascinating parallel! Please tell us some more about how acting and comic book art are similar. What, if any, acting techniques have had a positive impact on your drawing?

RWIV: I wish I had an acting or filmmaking education, but I don’t. All I can do is observe people and do my best to put myself in their shoes. If I know or can find someone who has had similar life experiences, asking about those experiences can also be super helpful.