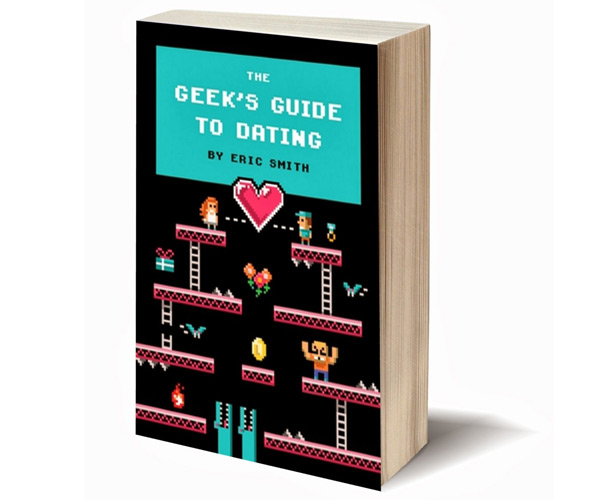 It’s never as simple as ‘Will you go out with me?’ is it? No. I can tell you that. But Eric Smith can tell you a lot more to ease you through the process of asking a girl out in his new book, The Geek’s Guide to Dating. That is, if you proudly identify as a geek. In a tongue-in-cheek style, this guide has exactly what the “Player One” who has everything but his leading lady needs, from the beginning of the quest to date level to the possible “Beyond Thunderdome.”

I’m not a geek guy, but I know that this book should be read with a sense of humour. Smith, a self-declared geek, is not asking anyone to change just to get a girl, he’s just showing you what will work best with your options, no matter what kind of geek you are (Book worm? Internet Guru? Gamer? Film Buff? Comic Book Collector?) He discusses tips on online dating, such as the best kinds of pictures to use, how to write the best ‘about me’ and how “complimentary adjectives like ‘cool’ and ‘awesome’ get nearly twice the response rate of physically focused words like ‘sexy and ‘beautiful.’” But have no fear, he also explains meeting someone IRL (“be friendly, not creepy”), you know, like at the comic book store, the book shop, or the weekend convention. Smith spends most of the book on how to find a date, asking her out, and getting ready for the date (more than just showering, but please, always shower), but he also talks about if the date blossoms into a relationship and then if it ends.

Sometimes, it reads like Player One barely interacts with society, but even if you live in a man cave, there’s still a gal out there for you who’s waiting for you to say ‘hi.’ And if you use this book as a drinking game every time there’s a reference to something geeky (popular ones are Scott Pilgrim, video games and Star Wars), you will be drunk within the first 10 pages. And as a geeky gal reading this, I was bummed not to see anything aimed at women besides a disclaimer page saying that mostly everything applies (besides maintaining facial hair). And by the same token, there’s nothing aimed at LGBTQ singletons. But Smith argues that everyone’s equal in pursuing a date, but geeks in general could use some tips. Besides these facts – the book would make for a fun gift for your endearingly awkward friend and we could all probably learn something new within these pages, no matter how geeky you think you are or not.

I spoke with Smith to find out about his motives, get some style tips and find out what he really thinks about geek stigmas.

Tell me about your other geeky work. 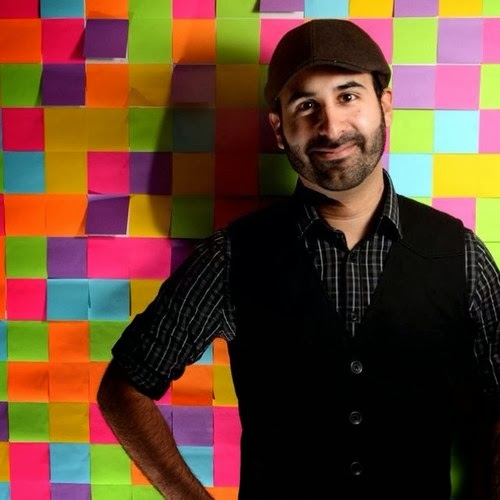 Well, I’m basically a full time geek. By day, I can be found working at Quirk Books, a publisher in Philadelphia who puts out an array of appropriately geeky books. Our recent big bestseller is William Shakespeare’s Star Wars by Ian Doescher. If that doesn’t explain it, I don’t know what will. I also run a hyper-local geek blog with one of my best friends, a site called Geekadelphia, and a black tie awards show called the Philly Geek Awards, where we honour local geeks in and around our city. I can also be found blogging about my love of books, comics, and video games on sites like BookRiot and Geekosystem. Sometimes I sleep, but I’m usually dreaming about those three things.

Why did you decide to write this book?

Quirk’s publisher came to me with the idea, after watching me write about geek culture for… well, pretty much the entire time we’ve known each other, and seeing my Facebook updates about my dating life. Fun fact, the woman I was talking about on Facebook at the time is now my fiancée.

Have you always been a geek dating guru?

(Laughs), I wouldn’t say that. Like every guy, I’ve made my share of mistakes in love and dating. But I like to think that all my experiences helped in writing this book. I also think it made me a better boyfriend and now-future-husband. While doing research for the book, I read a lot of dating articles and books, and found myself paying close attention to stuff I thought I could be doing better. So writing about dating, I think, made me better at it. Hopefully my fiancee thinks so! Oh, and you can find me writing dating advice columns over on Geekosystem. If your readers have questions, check it out!

What kind of geek to you classify yourself as? (In the book, you specify them as interested in games, web, movies, academia, etc) Why?

A book geek and a gamer, definitely. I went to school for writing and literature, and surround myself with books every single day. If I don’t get some reading in during lunch or after work, I get noticeably cranky. New Comic Book Day is taken very seriously over here. And games, man, I have an almost crippling addition to video gaming. I just can’t help myself! I’ve been known to take days off work to play through the latest blockbuster title, and whenever there is a new Halo out, I put my Master Chief suit on and pick it up at the local Gamestop or FYE. Oh, yeah, and I have a suit of Master Chief armor.

What differentiates geeks in dating than anybody else?

Well, geeks love taking what they are passionate about and making it a serious part of their life. That’s what defines us, I think. So in dating, those hobbies aren’t just hobbies. They’re a lifestyle, something key and important. Maybe even a career. So when you’re talking about all your favorite things, you’re not just talking about stuff you enjoy in passing… you’re talking about what makes you, you.

Do you think there is still a stigma to going on a date with someone who seems like a geek? Why?

I should hope not! I remember when I was still fussing around on OkCupid, and my friends looked over my profile. I got a few suggestions about maybe taking out my love of video games, my worry about the zombie apocalypse, the fact that I have a bunny named after Rorschach in Watchmen… you know, because they were worried about that stigma. But whatever. Don’t change because you’re worried about that. If you think someone might not talk to you because of who you are, you probably shouldn’t bother with them in the first place.

What do you think all of this Hollywood glorification of geeks, ya know, like The Big Bang Theory, does for people who identify with those types of likes, in terms of dating?

(Laughs) I think its fine. Just as long as people are aware that those characters are caricatures, you know? 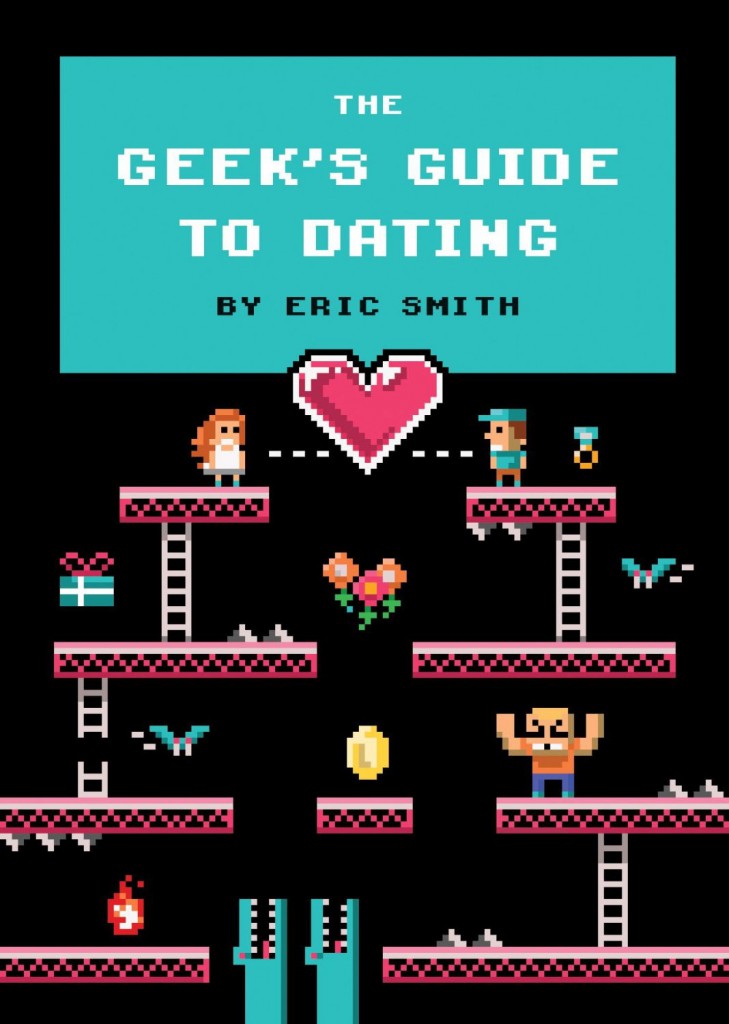 Where’s the line between telling someone to be themselves and then telling them what to change in order to get a date?

You shouldn’t have to charge to get a date. There are far too many movies that encourage that kind of behavior. Everyone knows that “I don’t love you. You changed! Now I love you!” is basically the plotline to Grease.

You proposed to your girlfriend (in Toronto!) before the book was released. Was this to help sales?

(Laughs) one of my good friends made a remark along those lines. “When you market a dating book, you really go all out!”

How has she responded to any of your geeky moves? (Well, clearly pretty well.)

I’d say she responded well. I hid the engagement ring in a book, and she still said yes. And our favorite kind of date is the kind where we just order take out and crash in the living room, watching Hulu, Netflix, or sometimes my favorite channel Me Playing Video Games.

You’ve moved in together. What geeky things have been able to stay, and what goes? Why?

Not that much changed with her moving in, really. A lot of my furniture went, but that’s because everything I own (or owned) is Ikea and she had, like, adult furniture. I put my Portal gun replica in the basement, but that made room for more furniture, owl art, and lots of throw pillows. Man, why are there so many throw pillows? Really though, I’m more than happy to get rid of just about anything, so long as it makes room for her in my life. It’s just stuff. Just don’t touch the Xbox. I have my limits.

I know you have a page saying that anything can be applied to girls, but why did you not focus on specific tips for girls or any kind of LGBTQ relationships?

Mostly because I’m a guy. I mean, I have a large group of girl friends and gay friends that I could have pooled for advice, tips, etc… but that probably would have made the book less genuine. It also would have been a much larger book.

Lightning Round, Do or Don’t:

Talk about an ex: Do / Don’t. Not until later in the dating phase, when you’re doing the whole story swap thing.

Bowtie: Do / Don’t. Depends on the outfit, but sure. Some guys can pull them off. I absolutely cannot.

Look for a princess to save: Don‘t. Women aren’t princesses who need saving, and no one wants to be treated as such.

Online dating: Do. Go for it. I did it. Things turned out well.

Correct a girl’s facts: Do / Don’t. Depends, I suppose! Correcting grammar on the first date? Don’t. If you’re one of those people, how did you even get a first date? Correcting a pop culture reference? Do. As long as you’re not being condescending about it. It’ll give you something interesting to talk about.

How many geeky references do you think made it into the book?

Oh man, a lot definitely made it in, but there were a bunch that got cut. But that’s okay. I’m saving those for guest blog posts and articles. I definitely had this sprawling bit about Nora Ephron movies that got the axe… but maybe that didn’t belong in there in the first place. She holds a special place in my rom-com heart, what can I say?

What are some of the geekiest pick-up lines you can think of?

Eh. I don’t use them, so I don’t think I really know any. If you want some embarrassing pick up lines that’ll make you cringe, there’s a Howard Wallowitz “Pickup Scientist” Meme you and your readers can flip though.http://knowyourmeme.com/memes/pickup-line-scientist

What is the most ultimate tip geeks can take away from this book?

Just be yourself. The book definitely encourages that, again and again.

What’s next for you?

Still busy writing away! My super agent is busy pitching my YA novel series, so hey, hopefully something happens with that! Til then, fussing over new book ideas and blogging away. And of course, planning a wedding.