Daniel Wu is the lead actor and producer of Into the Badlands, AMC’s ambitious experiment in genre that blends live action martial arts with high concept post apocalyptic fantasy. In the series, Wu plays Sunny, the deadliest assassin in the titular Badlands. Throughout season one, we’ve seen him tested in love, loyalty and spirit as he struggles to set aside the only life he’s known and escape from the brutal place he calls home.

Wu is clearly a force of dedication behind this passion project of high genre, which has inspired a strong fandom in its first six episodes. I spoke with him in advance of tonight’s season finale and learned first hand about the sweat, blood and cracked ribs that have gone into filming and got a look into some of the inspiration behind the man and his show.

In the penultimate episode of Into the Badlands’ first season Wu’s character does a spectacular flying kick into a tree, shaking loose a whole bunch of seeds that fall and activate dozens of bear traps surrounding him. It looks effortless and elegant on screen, but the nifty acrobatics came at a physical cost.

“It’s a spinning kick so you wrap the wire around your body and they pull you. Basically, you unravel, and come across the top of the tree, and come back down,” said Wu.  “As I was coming back down I go caught on the wire, across my ribs, and so my whole weight landed on the wire and it kind of hung me up a little bit. For a second. And the funny thing is that I didn’t really even realize that anything was wrong right away.”

Sure enough, he cracked a rib. But that didn’t stop Wu from continuing to film a major fight scene. One of the best aspects of Into The Badlands is that its cast performs most of their own stunts, so he couldn’t just tap out.

“We had to go directly from that—we were in the middle of shooting the final fight for episode six, which is a very elaborate, complicated fight,” he said. “I just powered through it. Because, a cracked rib, there’s not really much you can do about it. I mean, you can’t put a cast on it. You can’t do anything. You just try not to fall on that spot.”

All hell is going to break loose in the season finale

“All hell is gonna break loose it, seems,” said Wu, when I asked him why he and so many of the cast loved last week’s penultimate episode. “I think everything is coming to a boiling point. It’s great setup for the final episode of the season.”

“We leave this season with a major cliffhanger,” he said. “I mean basically we drop the bomb in episode six that changes the face of everything. So, all of the plotlines that have been happening, all that progression gets forced into a certain direction because of that.”

In terms of a potential second season, Wu said that he is most interested in how the story between Sunny and his student M.K (Aramis Knight) grows and changes.

The season one journey for Sunny has been filled with new emotions as Quinn, his boss and father figure, begins to descend into paranoid madness. The relationship between the two characters sets up a lot of conflict when it comes to how the show could continue.

“[Sunny] can’t just walk away from him, even though he wants to get out of the Badlands with Veil and M.K.” said Wu. “Those are new feelings that he’s never really experienced before. So, he’s really stuck. I’d like to see where the second season takes them. MK especially.”

Wu is one of the few members of the Into The Badlands cast with extensive martial arts experience, and, like I said, they all fight on camera. I ask him what it’s like working with untrained martial artists on a six hour season of TV that features 12 ambitious choreographed combat scenes.

“That’s the biggest challenge: trying to get those people—Emily and Aramis, Ally—to look great; to look like experts. And we had the great Dee Dee Koo. Our choreographer, Master Dee Dee, has had the experience of teaching Carrie Anne Moss, and Keanu Reeves, and Uma Thurman. All these people. It’s the same thing: how do you go from zero to looking like an expert in weeks, basically.”

He tells me that the six week fight camp was the key to the zero to hero formula. From nine O’clock in the morning to three in the afternoon for six weeks everyone was given professional training. But Wu sings the praises of the stunt doubles too. Master Dee Dee brought his team from China, and the production sourced four stunt people from the US, including a woman who does work for all the female characters. “She was amazing,” Wu told me.

This is not your everyday stunt work,” he said. “This requires martial arts skill and ability.”

Wu underlines how little preparation time they had, shooting on a TV schedule. There was a lot of improvisation, especially after episode four when the scripts weren’t available in advance of shooting.

“It’s nothing like in, say, The Matrix where they had like six months before hand and they prepped it all. They choreographed that, and then when they went to shoot it, that’s exactly what they shot. We were more like—I like to talk about Stephen [Fung], the action director’s style as being like jazz. You have a basic structure and then you improvise your way through it. You know, if something’s not working we change it on the spot and try something else.”

Into The Badlands is a live action anime

“Anime was a huge influence on all of us,” said Wu. “Me and Stephen especially.”

I have long suspected that anime has played a major role in inspiring the creative minds behind Into The Badlands. The high concept world combined with the colorful but brutal action and archetypal characters bleeds an anime vibe that I think is essential to appreciating the show. I asked Wu if he also sees the anime influences on Into The Badlands.

“I would say that, firstly, it’s basically taking a traditional wuxia kung fu movie, or kung fu series, and putting that into an American setting, which I think no one has ever done before. And then, secondly, it’s using influences of anime, for sure.”

He told me that the biggest anime influence on Into The Badlands is The Fist of the Northstar, which can be seen in the brutality and gruesomeness of the fight scenes, but that there are also elements of Akira and Dragon Ball, which Wu says can be seen in M.K.’s struggle to control his hidden power. “I almost see it as a live action anime in some ways,” he said.

Wu and Fung, who have a long history as producing partners, have put anime influences into their previous films. This is particularly true in the 2012 film Tai Chi Zero, which they both produced and Fung directed.

“That’s our style,” he said. “We like doing that kind of thing. Anime is definitely a major, major influence.”

“I remember very clearly that I saw Shaolin Temple—which is Jet Li’s first movie—when I was seven years old, and that was it. It was like a switch. It was like, ‘I gotta learn kung fu.’”

Since then, Wu says he’s had the goal of spreading martial arts. When he was at University of Oregon his mission to disperse the practice lead him to starting a team and, now that he’s in martial arts film and TV, he feels like he’s come full circle. As a viewer and former martial arts instructor myself, I can easily see Wu being the Jet Li for a new generation of students.

“It’s probably the ultimate thing I could give back to martial arts,” he said. “Because I feel like martial arts has given me so much. It’s made me who I am today, it’s made me understand how to be a person in this world. All these things. And also how to function in my industry, as well. To be able to give back, and do something really cool and visually exciting, but also inspire a bunch of kids is awesome. It’s awesome. I couldn’t ask for anything more.”

I asked if he has advice for young people who want to take up martial arts after watching Into The Badlands. He said, “Just go try it.”

“I think a lot of people get intimidated by walking into a martial arts studio or a dojo,” he said. “Just because it seems like it’s a very masculine, testosterone-built thing. Especially with MMA these days. That makes people believe it’s a meathead thing. But it’s not. There are so many sides to the martial arts besides just what you see in MMA. Just go out on a limb and try it, and if you don’t like the particular martial art that you’re trying—maybe it’s tae kwon do or whatever—you can switch to something else. Try something that fits you.”

Wu has already inspired at least one young person to take up martial arts. When I spoke to Aramis Knight for a previous interview, he told me that he is continuing his wushu training at a dojo in Temple City. I mention this to Wu, and he says that he hooked up his co-star with his current teacher.

Knight previously described the mentor-student relationship with his co-star as “very father-son,” but Wu sees it as much more fraternal.

“I would like to say more like big brother-little brother, you know, when he says father-son,” he said, laughing. “But I’m only a year younger than his real dad. So, it’s both. We developed a great relationship and a great bond from the fight camp, actually. From there onwards.”

“He would be really hard on himself sometimes. He would be upset when he couldn’t do a certain move and I would be like, ‘Hey man, chill. Don’t beat yourself up about this, because you’ve only just started a few weeks ago. You know some people train for years and can’t even get to this level. So you’re doing good.’”

His Dork Shelf is massive 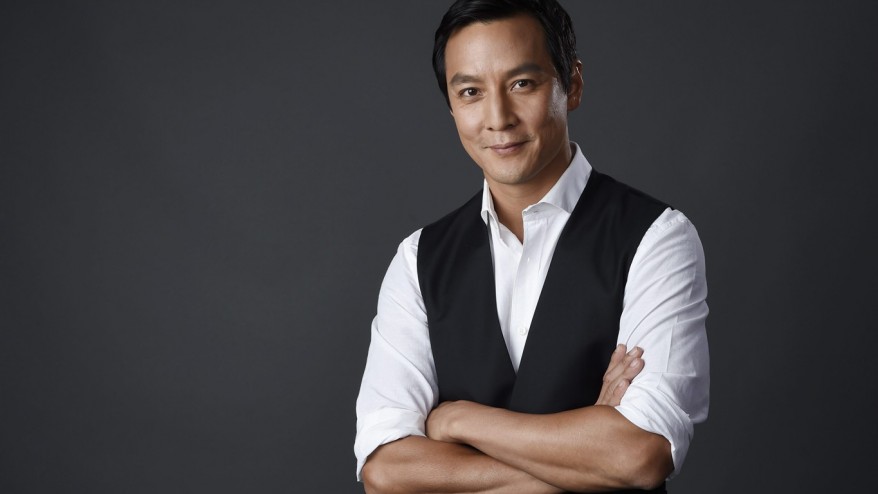 “I have that stuff everywhere in my house,” says Wu when I ask him about his dork shelf. “I have a whole collection of Ultraman figures I’ve had since 1990. They’re on my shelf. I have also a very large collection of Bruce Lee paraphernalia, just crap like little figures, toys, nunchucks, all those kind of things.”

He also has a lot of martial arts stuff — weapons and magazines — and he used to collect Ron English style vinyl figures, of which he says he has tonnes. But Wu tells me his dork shelf is in danger of annihilation.

“I have dork stuff everywhere. All over my house. But the thing is I have to hide all of that stuff now because my daughter is three years old and she sees those things as toys. But they’re not toys. They’re my collection, you know? So I’ve got to put them kind of in higher places or box them up otherwise she’ll destroy them.”